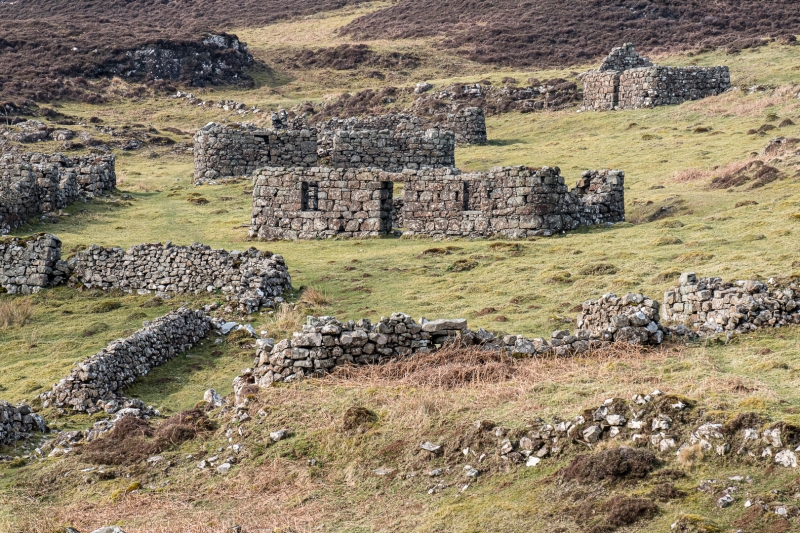 Crackaig has the better preserved buildings of the two settlements, consisting of a group of fifteen buildings with associated enclosures. The buildings stand mostly to eaves height, with the rounded external corners characteristic of Mull, and many have door and window lintels in situ.

There are indications of multi-period use of this settlement, with turf-covered foundations visible around and below some structures. One building at the far NW end of the Crackaig settlement is most unusual in having one gable-end.

A dwelling house at the eastern end of the settlement has ship graffiti carved on the outside wall. Local tradition has it that this was carved by one of the last inhabitants and represents the ship that was to take the people away across the Atlantic to their new home in America. At the time of the 1st edition Ordnance Survey map in the 1870s, the schoolhouse and all but three of the dwellings at Crackaig were roofless.

A single-roomed structure 175m to the SSE of the main cluster of buildings at Crackaig is said to be the schoolhouse.

The settlement of Glac Grugairidh lies 200m to the NE of Crackaig, and has been subject to later re-use for stock pens and enclosures. The buildings are therefore less well-preserved and have additional lengths of dyke joining up structures and creating enclosures.

However, this is of interest in terms of the change of land-use and adaptation of the buildings and is in contrast with neighbouring Crackaig, which appears to have been left largely untouched. The name of the settlement on the 1st edition Ordnance Survey is 'Glac Dubh-airidhe', indicating use of the area for sheilings at some point. All of the structures here are shown as roofless by this time (1870s).

The monument is of national importance because of its potential to contribute to an understanding of post-medieval settlement, economy and land-use. Its importance is increased by the wide range of different types of structure represented, by the indications of multi-period use of the settlement and by its proximity to other monuments of potentially contemporary date.