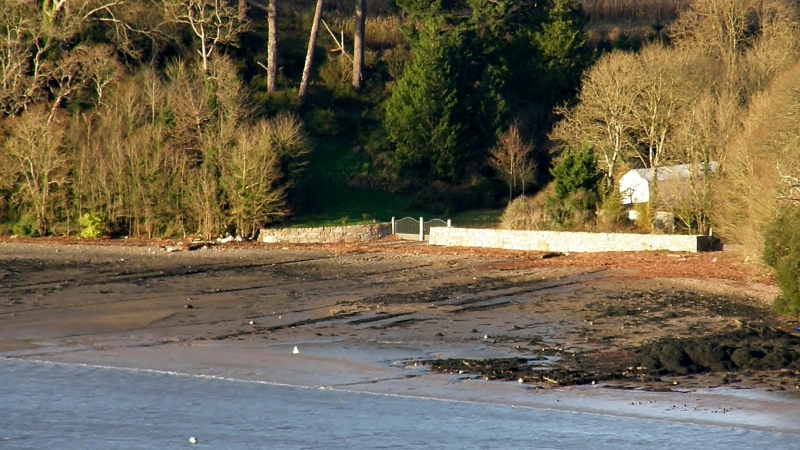 The monument includes a maintenance site built on the east bank of the
River Dart upstream from the port of Dartmouth in South Devon to service
landing ships during the preparations, engagement, and aftermath of the
1944 D-Day landings during World War II. The site includes an arrangement
of two near-parallel concrete slipways which extend out from the shore and
which terminate at mean low water. Operating from 1943 to 1944 the
monument was one of a number of repair and maintenance sites on the River
Dart which were under the control of the United States Naval Advanced
Amphibious Base (USNAAB) at Dartmouth; these repair sites contributed to
the D-Day preparations codenamed Operation Overlord. The slipways, each of
which operated with its own winch mechanism, were designed with a slight
gradient into the water. The ships could be winched forward at high tide
on a low metal or timber frame which ran on rails and which could be
raised up or lowered down the slipway as required. Once sufficiently
beached on a receding tide the ship was then secured by chocks with the
sideways tension taken up by a series of cables strung from wooden or
metal poles known as sheerlegs. Repairs took place during low tide and the
ships were then refloated at high tide by freeing the winching chains and
releasing the holding cables.
At Waddeton the two original concrete slipways both survive to their full
length but the metal rails on which the winching mechanisms travelled have
disappeared leaving only the bolt fastenings which attached the rails to
the slipways and the concrete rail bedding recesses. The northern,
upstream slipway is 110m in length of which 60m lies below the high water
mark and 50m above. The slipway is 8.5m in width. Lying at the landward
head of the slipway is a winch winding-block comprising an earthfast
concrete block 4m by 1.5m into which are embedded four pairs of thick iron
bolts protruding through the upper level of the block. At a distance of
10m behind the mounting block is a further earthfast concrete block 4.3m
by 3.8m. This is considered to be the emplacement for the winch. The
southern, downstream slipway is 30m apart from the northern at the head
and 70m apart at mean low water. The downstream slipway has 76m of length
below the high water mark and 50m above, giving a total length of 126m. It
is thus slightly longer than the northern slipway but in all other
respects it is identical and has the same arrangement of winching blocks
at its head.
Located to either side of the slipways and in the area between the two are
numerous circular concrete emplacements, each of which has at its centre
an embedded circular metal shoe. These emplacements, represent the bases
of the sheerlegs. The poles, which rested within a metal shoe held fast by
the concrete emplacements, no longer survive.
Leading down to the slipways from the landward side is a metalled road
constructed at the time of the operation of the site in order to facilitate
the movement of vehicles carrying heavy equipment which might otherwise have
become bogged down in clay and mud.
A contemporary watercolour painting of the site by the American war artist
Dwight C Shepler shows a Landing Craft Infantry (LCI), which was damaged
on a training exercise, having new plates welded. The painting is dated
March 1944 and it has been identified by Mr C Bircham as depicting the
southern slipway at Waddeton. Clearly shown in the painting are elements
of the winch mechanism on its moveable rail, the winch winding-block, and
several of the sheerlegs. The painting is titled `The Battered Amphibian'
and the landing craft shown under repair is identified only as Number 493.
This maintenance site was one of several such sites on the River Dart of
which only three now survive in anything like their original condition. It
was constructed by the USNAAB Dartmouth which was commissioned for
preparations for the D-Day invasion, providing a range of shore-base and
supply facilities before and during the invasion. After D-Day the
importance of USNAAB Dartmouth as a base began to wane and Waddeton Court
and its slipways was handed back to the British before the end of 1944.
Specifically included in the scheduling is that section of the metalled
supply road which lies within the boundaries of the scheduling and which
serves to provide a sample of the road which runs from the maintenance
site to Waddeton Manor House.
The modern wooden beach hut which lies between the two slipways, and all
fencing and gateways, are excluded from the scheduling, although the
ground beneath these features is included.

D-Day, June 6th 1944, is one of the most significant dates in modern history,
defining the start of the final phase of World War II in Europe. After 2-3
years of preparations, the assault phase of `Operation Overlord' - codenamed
Neptune - lasted for little over three weeks and by 30 June had landed over
850,000 men on the invasion beachheads, together with nearly 150,000 vehicles
and 570,000 tons of supplies.
Sites used for the building, maintenance and repair of landing craft and
landing ships were essential to developing and retaining a fleet capable of
delivering Prime Minister Churchill's `great plan'. With so many vessels
involved (landing craft and landing ships principally, but there were 46
different types in all), construction and maintenance were significant tasks.
Contemporary descriptions refer to unprecedented levels of maritime activity,
with every port, harbour and boatyard being involved, in addition to beaches
and the streets of coastal towns and villages. The more substantial sites were
either in largely unmodified dry docks or on specially built `gridirons' or
slipways. The gridirons were used for maintenance, and took the form of a
series of parallel concrete slipways running down a slight gradient into the
water, allowing the boat to be floated on at high tide and repaired at low
tide; some were supplied with a winch mechanism for pulling vessels onto the
grid, and steel mooring points (`dolphins') for securing them when afloat.
Recorded examples include sites on the Rivers Dart (Devon), Tamar and Fal
(Cornwall), and in Portsmouth Harbour. Slipways, with a metal rail, winch
mechanisms and dolphins, used for landing ship repairs, are recorded on the
River Dart. However, much construction, repair and maintenance work was
conducted on an ad hoc arrangement and leaves little trace: for example,
landing craft (assault) - LCAs - were small vessels constructed and repaired
mainly in back streets and improvised hards at the water's edge.
Although in military archaeology fixed defences will often survive better than
materiel representing the mobile offensive, sufficient of the preparations for
D-Day in England remains to give an impression of the scale of the Operation,
and the variety of the specific tasks involved. All sites where surviving
remains provide an impression of the scale and nature of the preparations for
D-Day will be considered of national importance.

The D-Day landing craft maintenance site on the River Dart, 560m south of
Waddeton Court survives well although its two dolphins were removed after
the War since they were considered to be a shipping hazard. The monument
retains its two original slipways to their full length along with elements
of their winching systems and the sheerleg emplacements which assisted in
restraining the beached ships. Although the iron rails and the moveable
winching mechanisms have been removed, the slipways themselves have barely
been affected by later activity. The monument's survival is complemented
by valuable recorded detail of the operations of USNAAB Dartmouth and by
the contemporary watercolour painting of the site which shows it
undertaking its repair role.
These records emphasis the site's importance as part of the overall
maintenance and embarkation facilities within the River Dart which assisted in
the successful preparation and execution of the D-Day landings.