A Scheduled Monument in Kingswear, Devon 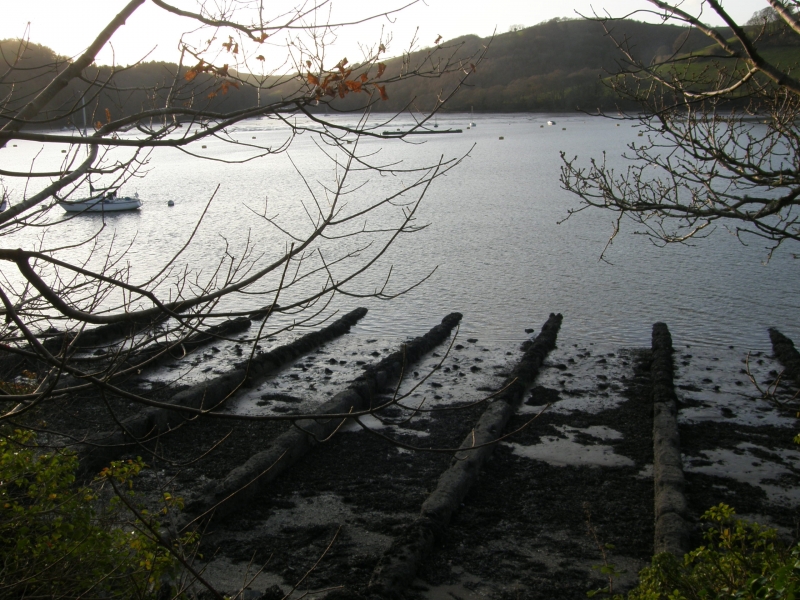 The monument includes a maintenance and repair site built on the east bank
of the River Dart upstream from the port of Dartmouth to service landing
craft during the preparations, engagement, and aftermath of the 1944 D-Day
landings during World War II. The site includes two separate, but closely
adjacent, arrangements of concrete piers called `gridirons' plus three
earthfast concrete mooring posts and various components of the onshore
facility. Operating from 1943 to 1944 the monument was one of a number of
repair and maintenance sites on the River Dart which were under the
control of the United States Naval Advanced Amphibious Base (USNAAB) at
Dartmouth. These repair sites contributed to the preparations for the
D-Day invasion of 6th June 1944, codenamed Operation Overlord, and were
part of the range of shore-base and supply facilities constructed before
and during the invasion. After D-Day, the importance of USNAAB Dartmouth
as a base began to wane and the facilities were handed back to the British
before the end of 1944.
Gridirons were designed to allow flat-bottomed landing craft to be floated
over them sideways at high tide and then moored, coming to rest upon the
piers of the gridiron as the tide fell and thus enabling inspection,
scraping, and repairs to be carried out. The two gridirons at Lower Noss
are virtually identical in plan, each being about 54m in width and
comprised of 12 parallel straight piers centred 4.85m apart. The piers are
just over 30m in length and slope gently down the intertidal shore to just
below Mean Low Water (MLW). The downstream gridiron, which lies about 25m
south of its upstream companion, has a few piers at its centre which
extend back to the rock face and thus exceed the 30m plus length which
appears to be standard and which was encountered at another gridiron site
at Maypool further upriver. The piers, which are built of shuttered
concrete and are embedded in the foreshore shingle and mud, have a maximum
width of about 0.7m; excavation of a gridiron site at Mylor in Cornwall
suggests that the piers sit upon a concrete raft although this could not
be determined at Lower Noss. Along the upper edges of each pier are a
series of opposed recesses 0.6m in length by 0.18m wide and 0.12m deep,
centred 3.2m apart. These recesses are believed to have held timber rails
formerly laid along the piers' upper surfaces at right angles to them
perhaps in order to prevent the bottom of the craft's hull from coming
into direct contact with the concrete of the piers.
The timber and steel mooring points (`dolphins') which would have stood
within the river and which would have held the craft whilst afloat and
during the positioning process, no longer survive. However, three massive
concrete mooring posts, two on the foreshore and one above Mean High Water
survive. Each mooring post has a deep central recess which would have held
a wooden post all of which have been removed or no longer survive. The
two foreshore emplacements are both about 4.5m square at the base and
taper towards the top. Both are built into the rock face and stand about
1.9m high, one to the north east of the upstream gridiron about 16m to its
rear and the other to the south east of the downstream gridiron about 18m
to its rear. The onshore mooring post, unlike those on the foreshore, is
almost completely earthfast with only about 0.3m of its structure showing
above ground. In other respects it is similar however, being 4.5 sq m with
a central recess which would have once held a post.
Associated with the gridirons was an onshore facility. Immediately behind
the southern end of the upstream gridiron are two flights of concrete
steps screened by brick-built walls. These steps give access to a levelled
area which,until 2003, housed a building known as a Curved Asbestos Hut of
a type often misidentified as a Nissen hut. Prior to demolition the hut
was recorded by way of drawn plans and photographs. It was 11.5m long by
5.6m wide and it appears white in an aerial photograph of 1946 taken not
long after de-commission which also shows the gridirons at low tide. To
the south of the hut was a small brick building, 1.1 sq m and 2m high,
also demolished in 2003, which appears to have been a latrine. A sunken
stone-lined water tank survives close to the top of the steps. Some
collapsed iron racking located to the rear of the hut was recorded in
2002. It consisted of two sets of racking; each set comprising three
A-frames supporting two runs of shelving. The whole complex is considered
to have represented a workshop or stores area associated with the repair
of landing craft on the nearby gridirons.
All modern fencing is excluded form the scheduling, although the ground
beneath it is included.

D-Day, June 6th 1944, is one of the most significant dates in modern history,
defining the start of the final phase of World War II in Europe. After 2-3
years of preparations, the assault phase of `Operation Overlord' - codenamed
Neptune - lasted for little over three weeks and by 30 June had landed over
850,000 men on the invasion beachheads, together with nearly 150,000 vehicles
and 570,000 tons of supplies.
Sites used for the building, maintenance and repair of landing craft and
landing ships were essential to developing and retaining a fleet capable of
delivering Prime Minister Churchill's `great plan'. With so many vessels
involved (landing craft and landing ships principally, but there were 46
different types in all), construction and maintenance were significant tasks.
Contemporary descriptions refer to unprecedented levels of maritime activity,
with every port, harbour and boatyard being involved, in addition to beaches
and the streets of coastal towns and villages. The more substantial sites were
either in largely unmodified dry docks or on specially built `gridirons' or
slipways. The gridirons were used for maintenance, and took the form of a
series of parallel concrete slipways running down a slight gradient into the
water, allowing the boat to be floated on at high tide and repaired at low
tide; some were supplied with a winch mechanism for pulling vessels onto the
grid, and steel mooring points (`dolphins') for securing them when afloat.
Recorded examples include sites on the Rivers Dart (Devon), Tamar and Fal
(Cornwall), and in Portsmouth Harbour. Slipways, with a metal rail, winch
mechanisms and dolphins, used for landing ship repairs, are recorded on the
River Dart. However, much construction, repair and maintenance work was
conducted on an ad hoc arrangement and leaves little trace: for example,
landing craft (assault) - LCAs - were small vessels constructed and repaired
mainly in back streets and improvised hards at the water's edge.
Although in military archaeology fixed defences will often survive better than
materiel representing the mobile offensive, sufficient of the preparations for
D-Day in England remains to give an impression of the scale of the Operation,
and the variety of the specific tasks involved. All sites where surviving
remains provide an impression of the scale and nature of the preparations for
D-Day will be considered of national importance.

The D-Day landing craft maintenance site at Lower Noss Point represents an
exception survival with two gridirons retaining all twelve piers, in
association with mooring posts and some onshore survival of the
maintenance area. The combination of foreshore and onshore facilities with
this level of survival is considered to be unique. It was one of several
such sites on the River Dart, of which only three remain in anything like
their original form. The monument's importance is enhanced by the
immediate post-war aerial photographs of the site in its near original
state and by valuable recorded detail about the site's location within the
wider context of the USNAAB at Dartmouth.