A Scheduled Monument in Dartmouth, Devon 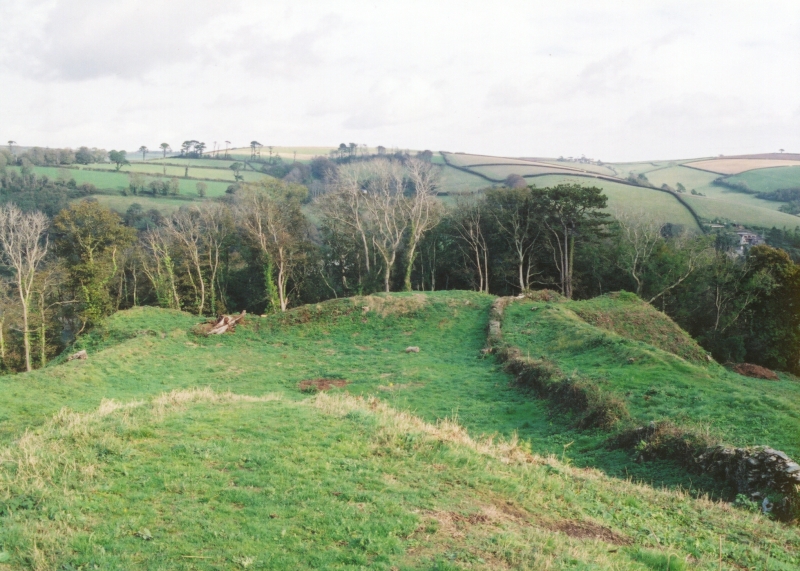 This monument includes a fieldwork of the English Civil War, dating to
between 1644 and 1646 and constructed to protect Dartmouth town and the
15th century artillery fort at Dartmouth Castle, which is the subject of a
separate scheduling 300m to the north east. A second earthwork fort at
Mount Ridley on the opposite side of the estuary protected the village of
Kingswear and associated coastal batteries. Gallant's Bower fort was
besieged for a short period in January 1646 after the fall of the town to
Parliamentary forces under Sir Thomas Fairfax, but surrendered almost
immediately.
The site lies at the eastern crest of a steeply sloping spur overlooking
the mouth of the estuary of the River Dart, with wide views to the north,
east and south over the estuary and immediate coastline.
The earthworks comprise a roughly rectangular fort, measuring 100m long
and 65m wide across the limits of the visible earthworks. Five massive
bastions, each connected by a large embankment enclose a gently sloping
interior 50m long and 27m wide. The ramparts and bastions rise from 1.7 to
3m from the interior, falling steeply for an average of 5m to the
hillslopes below. The intermediate ramparts are from 8.5m to 12m wide.
Each bastion is flat-topped and mostly featureless, though some have
traces of stone faced breastworks to protect the defenders.
Evidence for the quarrying of material for the fort is extensive, with
several quarry pits surrounding the site. These are mostly small with two
cut into the hillside on the south east side and several immediately north
west of the fort. One large pit south west of the fort measures 15m by 20m
wide and 0.6m deep, and is scarped 2.5m into rising ground on its west
side. Hedgebanks predating the fort are overlaid by the bastions on the
north side and survive as low linear earthworks 2.5m wide and from 0.3m to
1m high, while an animal pound 13m square, enclosed by stony banks 1.5m
wide and up to 1m high, partly underlies the eastern bastion.
Hedgebanks and a long wall running down the south east side of the fort
are of post-medieval and modern date. One of two small stone buildings is
associated with this wall, but has largely disappeared. The other lies a
short distance away, cut into the back of the south west rampart. It
measures 3.5m by 3.2m and stands up to 1.8m high, with a door on its east
side.
The fence posts are excluded from the scheduling, although the ground
beneath them is included.

English Civil War fieldworks are earthworks which were raised during military
operations between 1642 and 1645 to provide temporary protection for infantry
or to act as gun emplacements. The earthworks, which may have been reinforced
with revetting and palisades, consisted of banks and ditches and varied in
complexity from simple breastworks to complex systems of banks and inter-
connected trenches. They can be recognised today as surviving earthworks or as
crop- or soil-marks on aerial photographs. The circumstances and cost of their
construction may be referred to in contemporary historical documents.
Fieldworks are recorded widely throughout England with concentrations in the
main areas of campaigning. Those with a defensive function were often sited to
protect settlements or their approaches. Those with an offensive function were
designed to dominate defensive positions and to contain the besieged areas.
There are some 150 surviving examples of fieldworks recorded nationally. All
examples which survive well and/or represent particular forms of construction
are identified as nationally important.

Despite slight damage from tree roots and visitor erosion, the Civil War
fieldwork known as Gallant's Bower is in good condition. Its earthworks and
associated quarries will contain stratified remains relating to its
construction and use and will add considerably to the future understanding of
the monument, its surroundings and Civil War fortifications in general.