A Scheduled Monument in Churston-with-Galmpton, Torbay 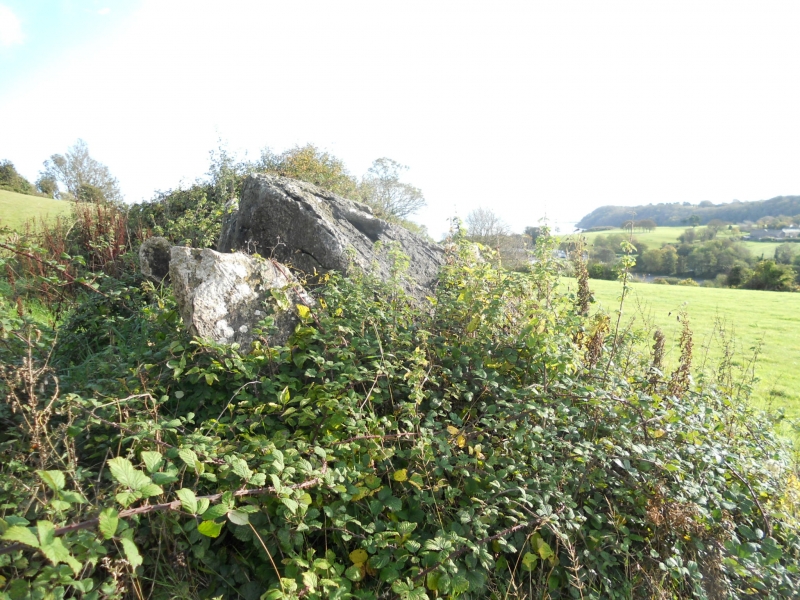 The monument includes a Neolithic chambered tomb located on the southern slope
of hilly ground overlooking the Torbay coast at Broadsands. The tomb, which
was incorporated into a hedge bank in antiquity, takes the form of a
megalithic chamber which was found during excavation to contain human remains.
The chamber, which has a single entrance passage, was set within a stone-built
mound known as a cairn; this type of chambered tomb is also known as a passage
grave.
Excavation of the tomb by Ralegh Radford in 1958 has demonstrated that it
comprises an irregular polygonal chamber with dimensions of 3.35m by 2.1m
and with a maximum height of 1.6m. It was found that the chamber was
constructed of eleven local limestone upright slabs (orthostats), of which
seven still remain in situ; in the gaps between them was an infill of
horizontally placed dry stone walling. One of the huge capstones of the tomb
has been displaced in antiquity and lies semi-upright on the southern side of
the monument. The chamber was encased in a mound of stones forming a near
circular cairn shown by excavation to have been 12m in diameter at the time of
construction but later reduced by cultivation and other activities to about 7m
north-south by 9m east-west. Where the cairn survives it preserves the
prehistoric ground surface beneath it. Entrance to the chamber was provided by
a parallel-sided entrance passage 3.8m long and 1.2m wide lined with
orthostats alternating with dry stone walling. This passage stood on the
eastern side of the tomb and was fronted by a slightly concave forecourt.
Further excavation of the interior of the chamber produced evidence for the
fragmentary and dispersed remains of three primary inhumations, two adults and
one infant, associated with Neolithic pottery. Their bones had been trodden
into a natural earth floor where, at some later stage, fires had been lit and
a stone pavement then set down sealing the burnt remains. This was considered
by the excavator to be a ritual cleansing prior to the reuse of the chamber.
Discovered lying upon the stone floor was part of the flexed skeleton of a
young adult male associated with pottery which suggested the possibility of a
Late Neolithic date for this secondary burial. The excavation also established
that the tomb had been disturbed in the medieval period, possibly during its
incorporation into a hedge bank which marked the parish boundary between
Paignton and Churston Ferrers; some of the orthostats of the chamber were
evidently displaced during this operation.
The results of the excavations were fully reported upon by Ralegh Radford in
the Proceedings of the Devon Archaeological Exploration Society of 1957/58.

Despite damage caused by cultivation and the construction of boundary banks,
the chambered tomb, 630m north west of Elberry Farm at Broadsands survives,
with structural elements of its chamber, passage entrance and surrounding
cairn intact, as the only known surviving example of its type in Devon. It is
known from excavation that the monument will contain archaeological and
environmental evidence which will be informative about the burial practices of
Neolithic peoples and the landscape in which the monument was constructed.

Books and journals
Ralegh Radford, C A, 'Proceedings of the Devon Archaeological Exploration Society' in The Chambered Tomb at Broadsands, Paignton, , Vol. 5, (1958), 147-167