A Scheduled Monument in Alwoodley, Leeds 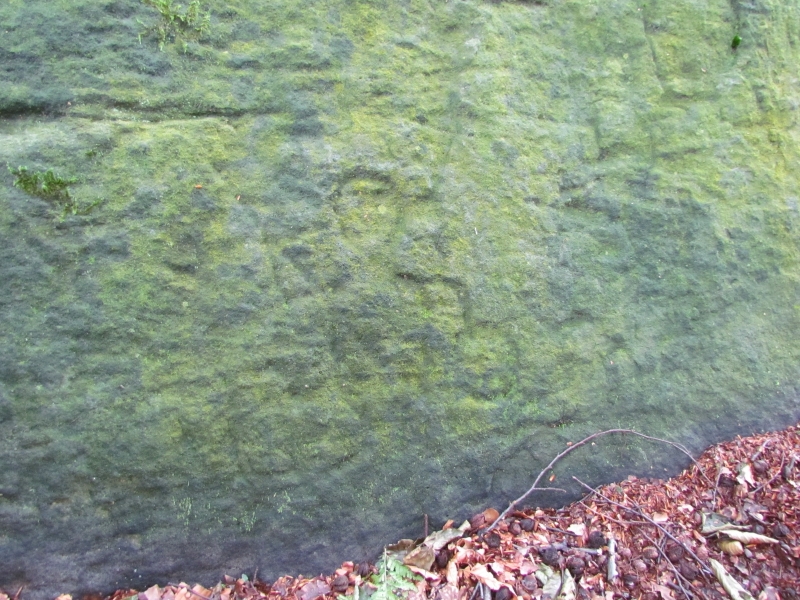 The monument includes a carved, earthfast, gritstone boulder which forms part
of a natural outcrop in Alwoodley Crags Plantation. The outcrop is situated on
a fairly steep, south facing slope, with the carving positioned at the base of
the outcrop on the almost vertical, south east face.

The carving depicts a schematic image of a human figure in a style typical of
the Brigantes tribal region. The carving is difficult to date, but the
depiction of a circular shield is characteristic of early Roman images. The
figure has been identified as a Celtic warrior god Cocidius, a deity which
features regularly in Romano-British society. The figure is approximately 40cm
high with a sub-circular head, almost square body and disproportionately long
arms and legs. The legs are not clearly defined and the right side of the
figure is either more eroded, or was carved less deeply than the left. The
facial features of the figure are barely discernible but the eyes are set
close together and positioned high on the face above a long nose. These types
of features are typical of the Celtic portrayal of the human figure. Two
concentric circles extending from the left hand are understood to be a shield,
and carved linear forms extending from the right hand are interpreted as a
spear or sword.

It is unclear why this carving is located here as there are no contemporary
monuments or features in the immediate area, although the Roman fort and
settlement at Adel lies only 1km to the north west. Comparable examples
elsewhere in the country (which are few in number) have been interpreted as
shrines or burial markers, but in this the case there is no indication where
any burial may have lain.

Roman religion adopted wholesale the classical pantheon of the Greeks. To this
the Romans grafted their own Italic and Etruscan beliefs frequently associated
with fertility and vegetation, and thus with the conquest of Britain AD 43-410
brought to the province classical deities covering a wide range of functions.
The indigenous population of Britain had already evolved a comprehensive
mythology of its own, based partly on the worship of natural phenomena and
partly on the worship of those aspects of life it considered vital -
prosperity, fertility, war and death. Roman toleration of native religions
enabled the deities of both conqueror and conquered to intermingle by means of
process of identification known as syncretism. The Roman god Mars, for
example, originally an Italic deity associated with fertility and untamed
woodlands, became linked with Celtic warrior deities such as Cocidius. Another
Roman deity, Silanus, was the woodland god worshipped under his own name and
in identification with native gods in the northern frontier region.

The rock carved human figure, 570m south of King Lane Farm, is the only
example of Romano-British rock carving known in West Yorkshire and one of very
few known outside the frontier region of Northern England. The shield and
spear suggest the figure depicts a warrior god and is believed to represent
the Celtic deity Cocidius. The carving provides a very important contribution
to the knowledge and understanding of Celtic art and religion in this area and
in the wider landscape.