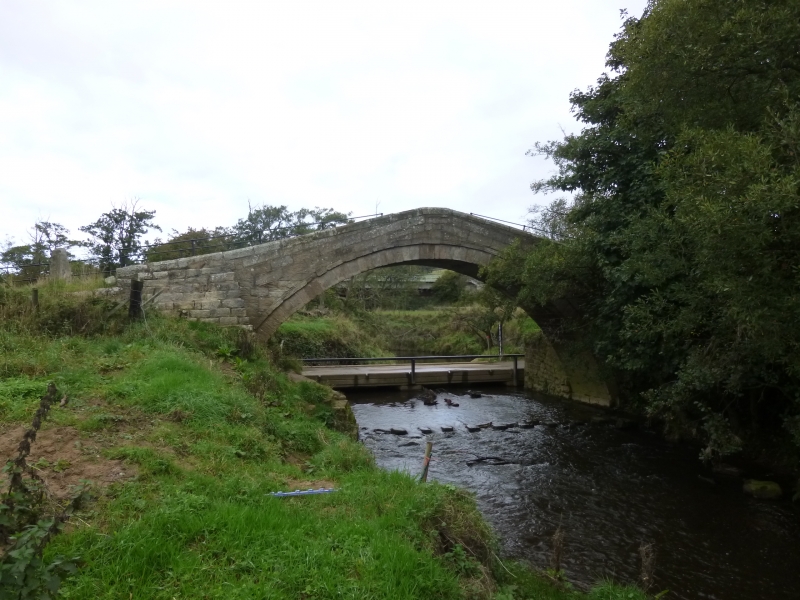 The monument includes a post-medieval packhorse bridge over the River Esk,
550m NNE of the ruins of Danby Castle. The bridge is Listed Grade II*.

Previously known as Danby Castle Bridge, Duck Bridge was largely rebuilt in
1717 by George Duck of Danby. Built in coursed herringbone-tooled sandstone,
it is steeply humpbacked over a large recessed round arch, with the arch
constructed with specially shaped stone blocks known as voussoirs. The
bridge's parapets, which are about 2m apart, are capped with rounded coping
stones and support modern timber handrails. Central on the north face of the
bridge, on the outside of the parapet, there is a carving identified as being
the Neville coat of arms. The bridge is supported by added stepped abutments
at the north west and south east corners, and beneath the bridge on the
western side. At either end of the bridge, there are paired rough stone gate
posts and the road surface over the bridge has a skim of tarmac. The modern
raised ford to the north and set of stepping stones to the south, which both
form boundaries of the monument, lie immediately outside the protected area.

Medieval single span bridges are structures designed to carry a road or track
over a river by means of a single arch, typically 3-6m in span. They were
constructed throughout the medieval period most commonly using timber. Stone
began to be used instead of timber in the 12th century, increasingly replacing
the use of timber in the 14th and 15th centuries. Many medieval bridges were
repaired, modified or extensively rebuilt in the post medieval period. In the
medieval period the construction and maintenance of bridges was frequently
carried out by the church, especially monastic institutions which developed
long distance packhorse trade routes, although from the 8th century bridge
maintenance came under the `trinodas necessitas' and was the obligation of the
landowner. Medieval bridges that still survive are stone and are of three main
types based on the profile of the arch which is typically pointed,
semi-circular or flattened. A common medieval feature is the presence of stone
ashlar ribs underneath the arch. The bridge abutments and revetting of the
river banks also formed part of the bridge. Where medieval bridges have been
altered in later centuries, these parts often retain original features,
sometimes concealed behind later stonework, they also sometimes retain remains
of earlier timber bridges. About 16 largely unaltered medieval single span
bridges are thought to survive still standing in England. All these are
considered to be of national importance. Many fragmentary remains of medieval
bridges, especially those built of timber, or bridges that were altered in the
post medieval period, particularly those examples with surviving documentary
references, are also considered to be of national importance.
Duck Bridge, although extensively rebuilt in 1717, is considered to retain
important medieval remains, especially within and below the structure of the
abutments. It is also a fine example of a humpbacked packhorse bridge of a
type that was once much more common in the region, with the high arch designed
to protect the bridge from rapidly rising flood waters, a frequent problem
with rivers draining the moorlands.