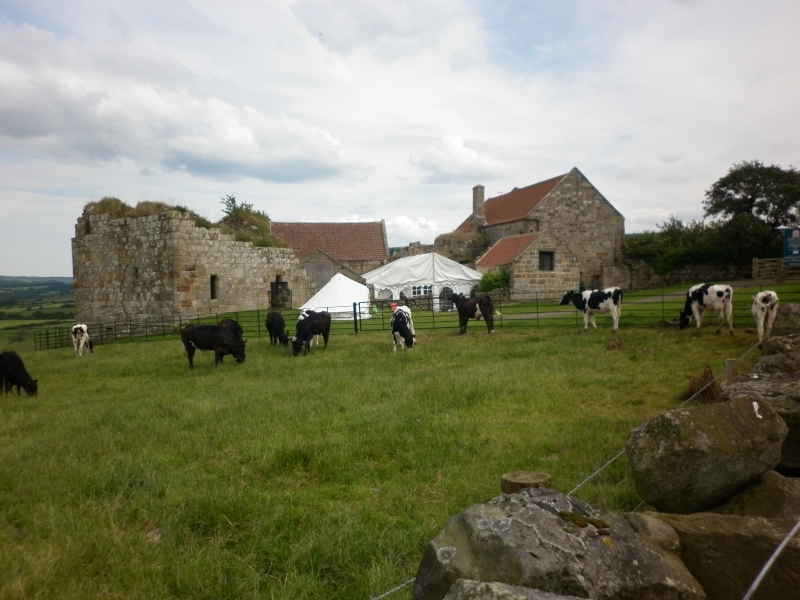 The monument includes the quadrangular castle, known as Danby Castle, which
lies on the south side of the Esk valley, 1.25km south east of Danby village.
The castle is situated near the foot of the scarp at the northern end of a
spur of Danby High Moor. Although partially demolished and altered by its
subsequent use as a farm, substantial parts of the great hall, service and
solar ranges, and three of the four corner towers remain upstanding, while the
later farm buildings are largely constructed of re-used materials obtained
from the original structure of the castle.
The castle is square in plan, originally comprising four wings arranged around
a quadrangle, with four rectangular towers projecting diagonally from the
corners. The Grade I Listed farmhouse incorporates the south east tower,
which survives to three storeys and once contained the castle chapel; although
the farmhouse is presently in use as a dwelling and thus excluded from the
scheduling the ground beneath it will retain medieval foundations and is
included. The adjacent two-storeyed south range survives as a roofed building
whose upper floor is used periodically as a court room while the ground floor
or undercroft is used for agricultural purposes. Because the south range has
remained roofed and in use, the fabric has been protected from the elements
and its original features include an intact vaulted ceiling to the central
chamber of the undercroft. However, there have also been a number of
alterations to this range over the years, including the insertion of new
windows and a fireplace. Access to the upper storey is via a partially
demolished and reconstructed forebuilding which contains a staircase roofed
with large stone slabs.
The south west tower has been demolished to its foundations except for the
outer skin of its south east wall, incorporating two original window openings,
which is retained as a 2m high garden wall. This tower will have been similar
in plan to the upstanding towers. The west range has also been demolished,
although its foundations survive below ground. A ruined staircase, similar to
that giving access to the south range, survives at the junction of the west
range with the north west tower and north range. The west wall of the west
range will lie roughly on the line of the modern dry-stone field wall which
runs south from the north west tower.
The north west tower survives as a roofless shell to a height of 7m; several
features, including a garderobe, fireplace and the wall off-set which
originally carried the first floor timbers, are visible. The original ground
floor entrance to the tower gives access to the former kitchen in the north
range. The latter room, with its two fireplaces, occupied the entire ground
floor of the range and was open to the roof at the west end. The eastern end
of the range had an upper storey the placements for whose timbers are visible
on the walls. Although partially altered in the 18th or early 19th century to
be used as a farm building, the north east tower survives to the top of the
first floor (6.5m high); it originally comprised two large chambers, one on
each floor, with garderobe chambers and fireplaces built into the wall.
Stone corbels supported the first floor timbers and access to the upper storey
was provided via a newel stair in the south east corner of the tower.
The east range, containing the great hall, was largely demolished and rebuilt
as a smaller barn in the 18th century but the full length of the west wall,
containing four tall medieval window openings, survives to almost full height
(5m). The north end of the hall, now the north wall of the barn, retains the
original doorways leading to the kitchen and the ground floor of the north
east tower. The southern part of the west wall of the hall is free-standing,
linking the barn with the south range, and contains a 2.3m wide, arched
gateway giving access to the courtyard. The medieval hall is estimated to
have been at least 10m wide and the foundations of the original east wall will
survive below ground to the east of the later barn.
To the west of the castle, a partially buried boundary wall, running from the
north west tower to the road, forms a small trapezoid enclosure measuring 30m
by 25m across. The ground within this enclosure is slightly uneven,
demonstrating the presence of buried building foundations; these remains will
be those of ancillary structures, such as stables and workshops, associated
with the castle.
Danby Castle was built to replace the earlier earthwork castle at Castleton,
reputedly destroyed by fire in the 14th century. The arms of Brus of Skelton,
Neville, Latimer and Roos are all to be found incorporated into the stonework.
William Latimer is thought to have erected Danby Castle between 1300-1302.
Later in the 14th century the castle passed to the Nevilles and there is a
tradition that Catherine Parr, widow of John Neville lived at Danby during her
courtship with Henry VIII. Later in the 16th century, Danby passed to the
Danvers family. The manor was bought by John Dawnay, later created Viscount
Downe, in the 17th century and has remained in the property of the Dawnay
family until the present day.
The farmhouse is excluded from the scheduling, as is an old wooden threshing
machine built into the barn on the east range; the ground beneath these
features is, however, included.

A quadrangular castle is a strongly fortified residence built of stone, or
sometimes brick, around a square or rectangular courtyard. The outer walls
formed a defensive line, frequently with towers sited on the corners and
occasionally in intermediate positions as well. Some of the very strongly
defended examples have additional external walls. Ditches, normally wet but
sometimes dry, were also found outside the walls. Two main types of
quadrangular castle have been identified. In the southern type, the angle and
intermediate mural towers were most often round in plan and projected markedly
from the enclosing wall. In the northern type, square angle towers, often of
massive proportions, were constructed, these projecting only slightly from the
main wall. Within the castle, accommodation was provided in the towers or in
buildings set against the walls which opened onto the central courtyard. An
important feature of quadrangular castles was that they were planned and built
to an integrated, often symmetrical, design. Once built, therefore, they did
not lend themselves easily to modification. The earliest and finest examples
of this class of castle are found in Wales, dating from 1277, but they also
began to appear in England at the same time. Most examples were built in the
14th century but the tradition extended into the 15th century. Later examples
demonstrate an increasing emphasis on domestic comfort to the detriment of
defence and, indeed, some late examples are virtually defenceless. They
provided residences for the king or leading families and occur in both rural
and urban situations. Quadrangular castles are widely dispersed throughout
England with a slight concentration in Kent and Sussex protecting a vulnerable
coastline and routes to London. Other concentrations are found in the north
near the Scottish border and also in the west on the Welsh border. They are
rare nationally with only 64 recorded examples of which 44 are of southern
type and 20 are of northern type. Considerable diversity of form is exhibited
with no two examples being exactly alike. With other types of castle, they are
major medieval monument types which, belonging to the highest levels of
society, frequently acted as major administrative centres and formed the foci
for developing settlement patterns. Castles generally provide an emotive and
evocative link to the past and can provide a valuable educational resource,
both with respect to medieval warfare and defence, and to wider aspects of
medieval society. All examples retaining significant remains of medieval date
are considered to be of national importance.

Although partially demolished and altered by its subsequent use as a farmhouse
and outbuildings, a majority of the original structure of Danby Castle
survives to almost full height and the full ground plan will survive as buried
foundations. Unusually, Danby Castle was constructed on a new site away from
its Norman predecessor at Castleton and the two monuments considered together
offer a relatively rare opportunity to study the development of medieval
fortifications over time. In addition to the castle itself, a small adjacent
enclosure has been identified; this will contain the below-ground remains of
structures relating to the agricultural or economic functions of the castle.
Danby Castle was reputedly a residence of Catherine Parr, wife of King Henry
VIII.