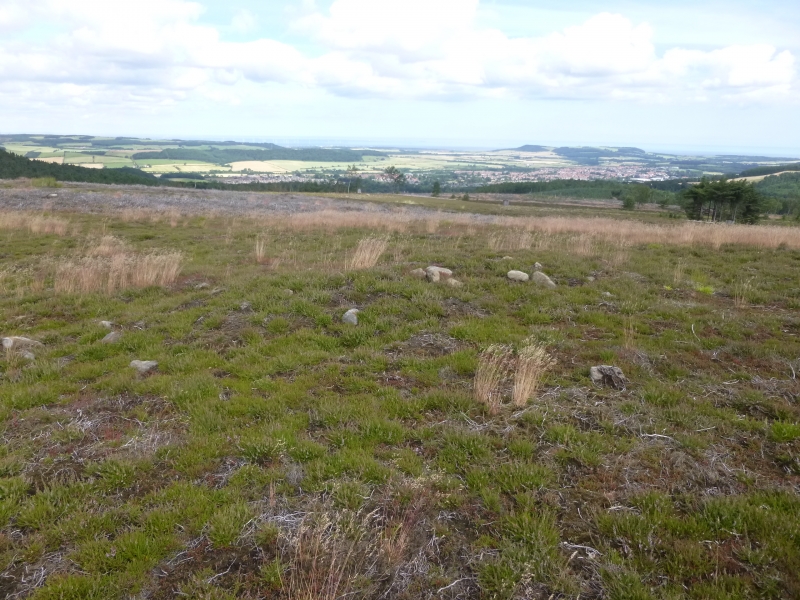 The monument includes two adjacent round cairns situated on a moorland ridge
on the edge of the North York Moors. The more westerly cairn has an ovoid
stone mound which is now largely buried by peat. It measures 5m north to south
and 4m east to west and stands up to 0.4m high. There is a slight hollow in
the centre caused by past excavations. The second cairn lies 12m to the east
and has a stone mound which is also buried by peat. It is 6m in diameter and
stands up to 0.4m high. It incorporates a flat natural boulder at its east
side.
The cairns belong to a group of seven spread along the ridge and they lie in
an area rich in prehistoric monuments, including further burial monuments,
field systems and clearance cairns.

The importance of the two cairns 820m south east of Hanging Stone is enhanced
by their association with other round cairns in the area. They belong to a
group of seven burial monuments and such clusters provide important insight
into the development of ritual and funerary practice during the Bronze Age.
They are also situated within an area which includes other groups of burial
monuments as well as field systems, enclosures and clearance cairns.
Associated groups of monuments such as these offer important scope for the
study of the distribution of prehistoric activity across the landscape.