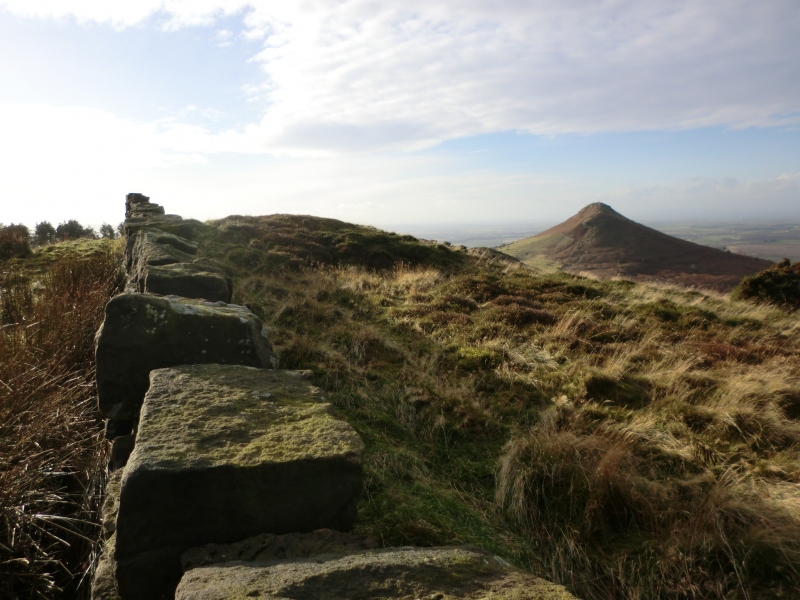 The monument includes a round barrow situated in a prominent position at the
top of a north west facing scarp slope on the edge of the North York Moors.
The barrow has an earth and stone mound 14m in diameter and standing up to
1.5m high. It was originally surrounded by a kerb of stones which defined the
barrow and supported the mound. However, over the years many of these stones
have been taken away or buried by soil slipping off the mound, although some
can just be seen on the surface at the north and south edges. In the centre of
the mound there is a hollow caused by past excavations. The line of an early
excavation trench can also be seen running in a westerly direction from the
centre of the mound. A boundary stone, Grade II listed, is situated 2m from
the southern edge of the mound, bearing the legend TKS1815 on its south east
face. The barrow is one in a line of four spread along the top of Ryston Bank
(the other three form the subject of separate schedulings) and lies in an area
rich in prehistoric monuments, including further barrows, field systems and
clearance cairns.
The field boundary wall and fences which cross the mound, are excluded from
the scheduling, although the ground beneath them is included.

Despite limited disturbance, the barrow 630m south west of Hanging Stone has
survived well. Significant information about the original form of the barrow
and the burials placed within it will be preserved. Evidence for earlier land
use will also survive beneath the barrow mound.
The barrow is one of a group of four burial monuments and such clusters
provide important evidence for the development of ritual and funerary
practice during the Bronze Age. It is also situated within an area which
includes other groups of burial monuments as well as field systems,
enclosures and clearance cairns. Associated groups of monuments such as these
offer important scope for the study of the distribution of prehistoric
activity across the landscape.