A Scheduled Monument in Lewannick, Cornwall 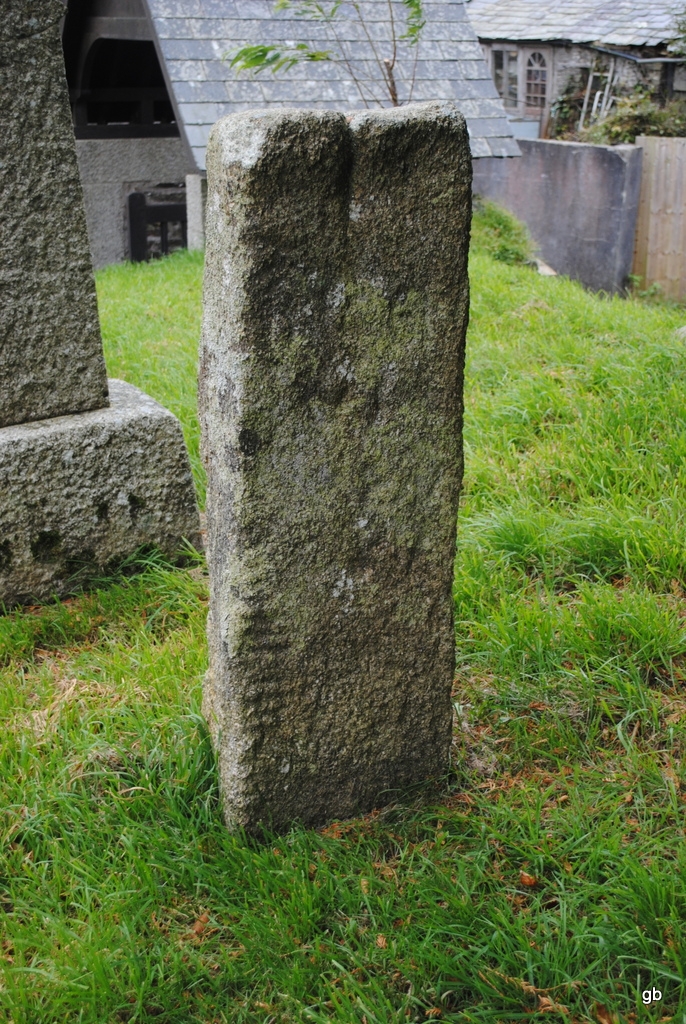 The monument includes an early Christian memorial stone in the churchyard at
Lewannick.
The memorial stone survives as an upright granite shaft measuring 1.31m in
overall height. The rectangular section shaft measures 0.38m wide by 0.23m
thick, the broader faces oriented to the north east and south west. The upper
part of the south east face has been fractured, which has reduced the
thickness of the top of the stone to 0.18m. This stone bears an incised
inscription in short horizontal lines on its north west face. The inscription
is in Latin, incised in an early medieval insular form of script derived from
Roman style capitals, and has been read as `INCENVI MEMORIA' or `INGENVI
MEMORIA' which translates as `the monument of Incenvus'. There is another
inscription on the north corner of this stone incised in an early medieval
script of Irish origin called `ogham', which occurs on Christian monuments of
the fifth and sixth centuries AD. The ogham inscription, whose lettering is
represented entirely by short incised lines in varying multiples and at
various angles, has been read as `INGENAVI MEMOR', repeating the name in the
Latin inscription. Both of these inscriptions are very worn and virtually
indecipherable. The use of inscriptions in both Latin and ogham, and the
formula employed in the Latin inscription and the style of the lettering,
combine to suggest a fifth/sixth century to eighth century date for this
memorial stone.
This stone was found in 1892 by the local historian, Langdon, deeply
buried on the south side of the churchyard at Lewannick. The stone has
remained in the churchyard, and its present location is close to the south
entrance to the churchyard.
The grave with its granite headstone and kerbed surround to the south east of
the memorial stone falls within the stone's protective margin and is excluded
from the scheduling but the ground beneath is included.

The early Christian memorial stone has survived well, with most of its
inscription complete, though very worn. It is one of only six memorial stones
in south west England to bear an inscription not only in Latin but also in
ogham script. The inscription itself is of importance from a period generally
lacking in such historical references. Its discovery in the churchyard and
re-erection there in the 19th century reflects the continuity of use of
Lewannick churchyard as a burial place from the early medieval period to the
present day.