Medieval churchyard cross in Lanteglos by Fowey churchyard, 2m south of the church 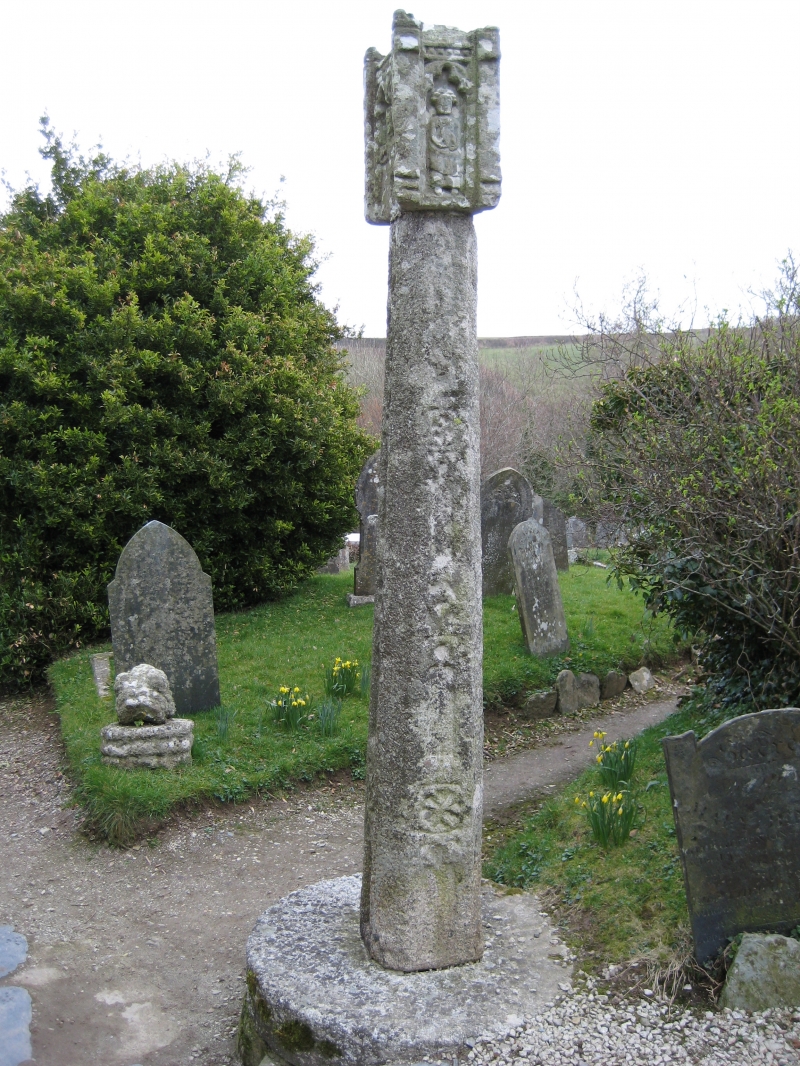 The monument includes a medieval churchyard cross in Lanteglos by Fowey
churchyard on the south east coast of Cornwall.

The Lanteglos by Fowey churchyard cross survives as a granite lantern head
(so called because the shape of the rectangular head is of a similar shape to
a lantern), on an octagonal shaft set on a round, millstone base. The cross is
3m high and the principal faces are orientated north west-south east. The head
is elaborately decorated with sculpted figures, those on the sides set within
canopies topped with pointed arches, those on the principal faces set below
two ornately arched holes which completely pierce the head. The top of the
head forms a low roof shape with fractured pinnacles at each corner. On the
north west face there is a crucifixion scene, a figure of Christ hanging from
the cross; on the south west face are the virgin and child. There is a figure
on each side of the head, both of whom are probably saints, possibly St Peter
and St Paul. The four corners of the head form moulded edges to the canopies
on each side. The head is cemented onto an octagonal-section granite shaft.
The shaft measures 2.52m high. Four of the octagonal sides measure 0.23m wide
at the base tapering to 0.15m at the top; the other four sides measure 0.16m
wide at the base tapering to 0.12m at the top. The four narrow sides are
decorated at intervals with various motifs, such as wheels, the space between
motifs being recessed. The north, east, south and west sides of the shaft
slope out above the base, to form the square section moulded foot. The shaft
is set in a large circular mill wheel measuring 1.1m north east-south west by
1.12m north west-south east and 0.2m high. The top of this mill wheel has
incised grooves radiating out from its centre. This lantern cross is situated
to the south of the church porch at Lanteglos by Fowey. The cross was found in
1838 buried in a trench at the west end of the church. It was left lying on
the ground for two or three years before being re-erected in its present
position on a millstone base. The cross head was probably part of the original
churchyard cross, and the shaft may be part of a different cross though they
are of a similar date, the 14th-15th centuries.

The chest tomb grave to the north east of the cross, the headstone to the
south east and the gravel and slate surfaces of the footpaths and steps to the
south west and north west of the cross where they fall within its protective
margin are excluded from the scheduling, but the ground beneath is included.

This cross is Listed Grade II.

The medieval lantern cross in Lanteglos by Fowey churchyard has survived well
and is a good example of a lantern cross, a rare type of churchyard cross in
Cornwall. The later octagonal cross shaft is unusual in being a decorated
example. Despite its minor relocation, the cross retains its original function
as the churchyard cross. The burial of the cross head, and its re-erection on
the shaft and millstone base in the 19th century, illustrates well the
changing attitudes to religion that have prevailed since the Reformation and
their impact on the local landscape.