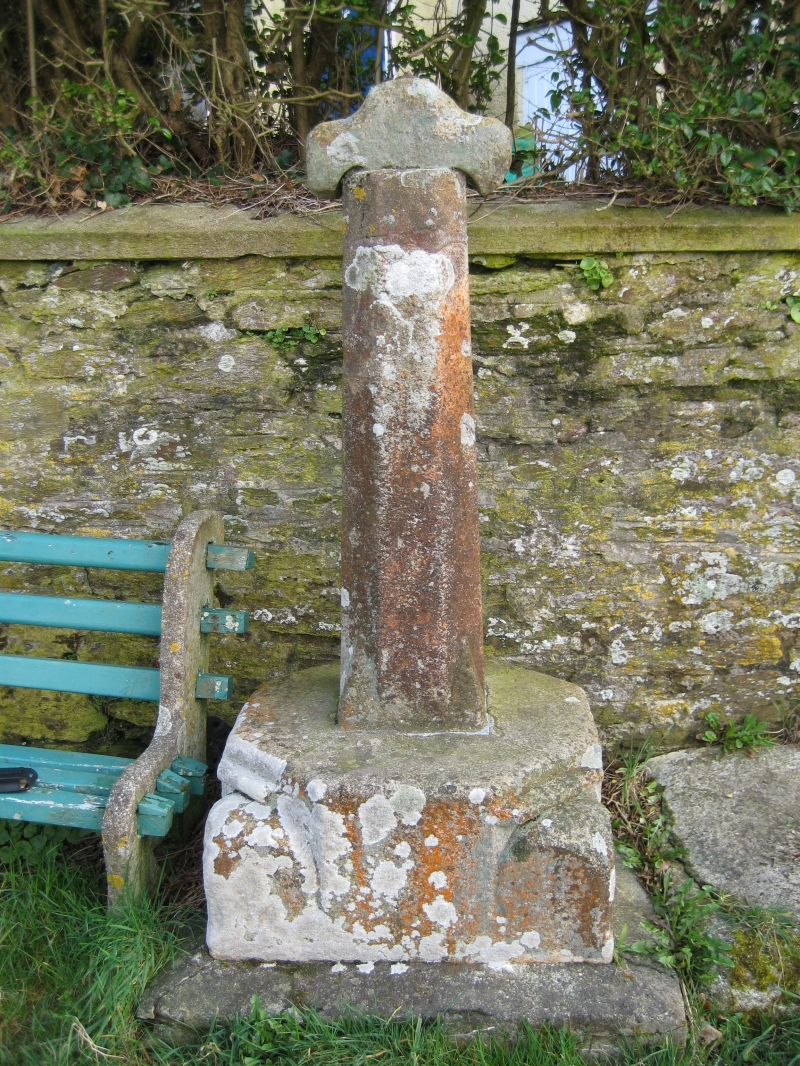 The monument includes a medieval wayside cross and a protective margin around
it, situated at a junction on the main road approaching the fishing town of
Polruan on the south east side of the Fowey estuary on the south coast of
Cornwall. Adjacent to the west of the cross is a granite trough, now filled
with concrete, which was depicted together with the cross in antiquarian
records as an arrangement to collect water from a stream at this location.
The wayside cross survives as a composite of two former medieval crosses: the
granite head of one cross is set on an octagonal shaft and base of Pentewan
stone from another cross. The cross head has unenclosed arms, a form called a
`Latin' cross, its principal faces orientated to the north and south. The
cross head measures 0.15m high by 0.37m wide and 0.10m thick; the lower edges
of the side arms and base of the head have been shaped to fit the top of the
shaft. At the top of the upper limb an iron nut and stud project, the upper
end of an iron stud having been driven through the head to attach it to the
shaft. The octagonal section shaft is 1.8m high and 0.28m wide by 0.28m thick;
each of the eight sides is 0.12m wide. The upper end of the shaft has a
repaired fracture, with a cement joint 0.14m below the top of the shaft. The
base of the shaft is decorated with a moulded foot, 0.2m high, sloping out
from the north west, south west, south east and north east sides. The shaft is
cemented into a large base slab, 0.35m high and measuring 0.74m north-south by
0.73m east-west. The upper edge of the base is octagonal in plan. Below the
north west, south west, south east and north east faces of the upper edge is a
moulded rib above a moulded step, the step projecting 0.16m beyond the rib,
giving the base a square plan at its lower edge. The base is mounted on a
square modern concrete plinth, 0.97m east-west by 0.83m north-south and 0.14m
high, with an upper edge chamfer 0.12m wide.
This cross was first recorded at this location on a map of 1771. In 1872, the
historian Blight illustrated the cross on a platform over a stream which
poured into an adjacent trough. This stream is no longer active and its course
has subsequently been covered over. The trough is a concrete filled granite
block, measuring 1.79m east-west by 0.8m north-south and 0.25m high, which is
now located from 0.06m to the west of the cross's base. Blight's record
indicates the composite assembly of the head, shaft and base as survives
today; the historian Baird has suggested that the cross head came from the
medieval St Saviour's chapel on the headland overlooking Polruan, 240m to the
WNW.
This wayside cross is situated at the south east edge of Polruan, towards the
upper end of a steep hill on the only road leading out of this town, an
important fishing town and port during the medieval period and one of the
principal ferry points across the Fowey estuary on the route along the south
Cornish coast. This road was also the route linking the port with its parish
church at Lanteglos. The cross is located at the junction of this road with a
branch to the west leading to the site of St Saviour's Chapel on the headland.

The modern bench immediately to the east of the cross but within the area of
the protective margin is excluded from the scheduling but the ground beneath
is included.
The cross is Listed Grade II.

The wayside cross on Fore Street, Polruan has survived reasonably well and
though the monument has long been surmounted by the head from a different
cross, the shaft and base remain as markers on their original junction on this
route of regional and local significance. This monument also marks a way
within the parish to the church and to St Saviour's Chapel, demonstrating well
the major roles of wayside crosses and the longevity of many routes still in
use.