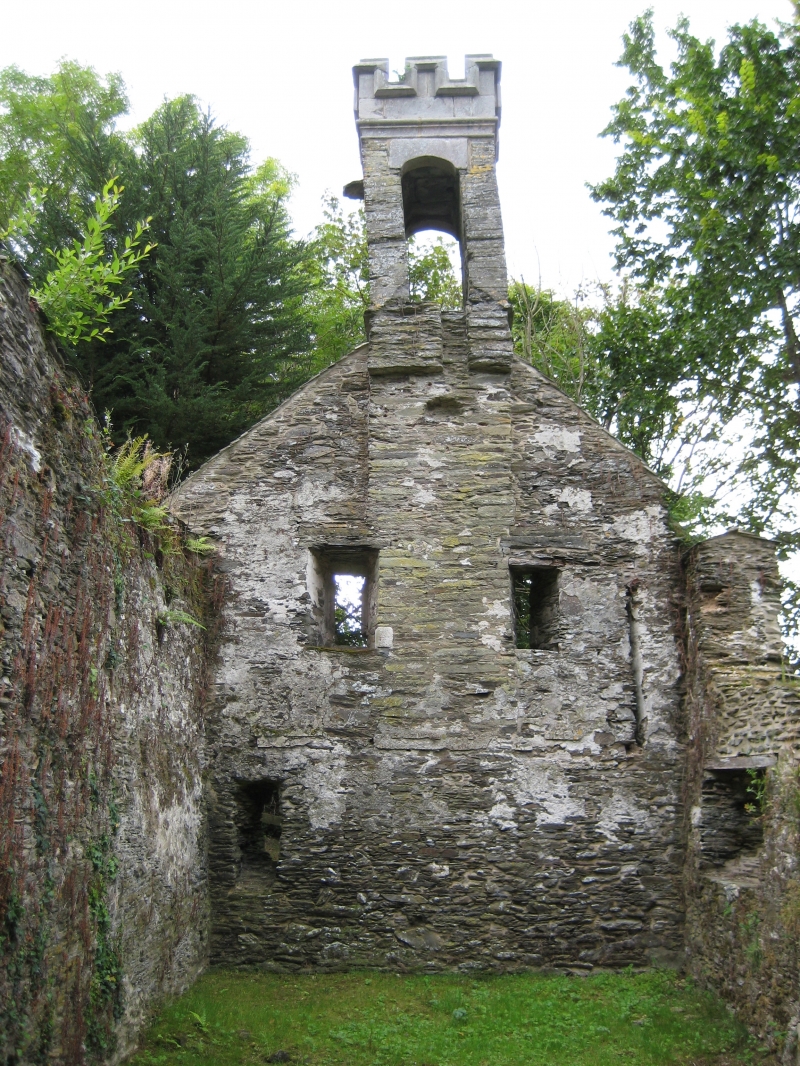 This record was the subject of a minor enhancement on 3 December 2015. This record has been generated from an "old county number" (OCN) scheduling record. These are monuments that were not reviewed under the Monuments Protection Programme and are some of our oldest designation records.

This monument includes a medieval chapel situated in the grounds of Hall Farm at Bodinnick overlooking the estuary of the River Fowey. The chapel survives as a small single celled rectangular roofless building with a bell tower at the west end. The bell tower stands to full height complete with crenellations, but is leaning slightly and is not bonded to the west wall. The west wall stands to eaves height and has two windows. The south wall attains full height and has one window with fine stone moulding. The east wall has a wide cart doorway with a wooden lintel. The partial north wall has a window and the original doorway opening although the moulding has been removed. The chapel, dedicated to St John the Baptist is recorded in 1374, 1375 and 1406. It belonged to the Mohun family, whose mansion lay to the north and was also probably used for public worship. The antiquarians of the 19th century recorded its subsequent re-use as a barn and granary. Henderson made a full record of it in 1924 and noted that during the conversion the east window had been removed and this wall rebuilt to accommodate the cart doorway and a second storey loft had been inserted. He also noted the oak cradle roof was almost perfect and said an enclosure to the south had contained a cemetery. A timber and corrugated iron roof collapsed following a storm in 1976 and part of the north wall collapsed soon after. The chapel has been the subject of some recent consolidation work.

A medieval chapel is a building, usually rectangular, containing a range of furnishings and fittings appropriate for Christian worship in the pre- Reformation period. Chapels were designed for congregational worship and were generally divided into two main parts: the nave, which provided accommodation for the laity, and the chancel, which was the main domain of the priest and contained the principal altar. Around 4000 parochial chapels were built between the 12th and 17th centuries as subsidiary places of worship built for the convenience of parishioners who lived at a distance from the main parish church. Other chapels were built as private places of worship by manorial lords and lie near or within manor houses, castles or other high-status residences. Chantry chapels were built and maintained by endowment and were established for the singing of masses for the soul of the founder. Some chapels possessed burial grounds. Unlike parish churches, the majority of which remain in ecclesiastical use, chapels were often abandoned as their communities and supporting finances declined or disappeared. Many chantry chapels disappeared after the dissolution of their supporting communities in the 1540s. Chapels, like parish churches, have always been major features of the landscape. The sites of abandoned chapels were often left largely undisturbed and thus retain important information about the nature and date of their use up to their abandonment. Despite having been altered and re-used as a barn, the medieval chapel at Hall Farm survives comparatively well and will contain archaeological and environmental evidence relating to its construction, development, re-use, social and religious significance and overall landscape context.