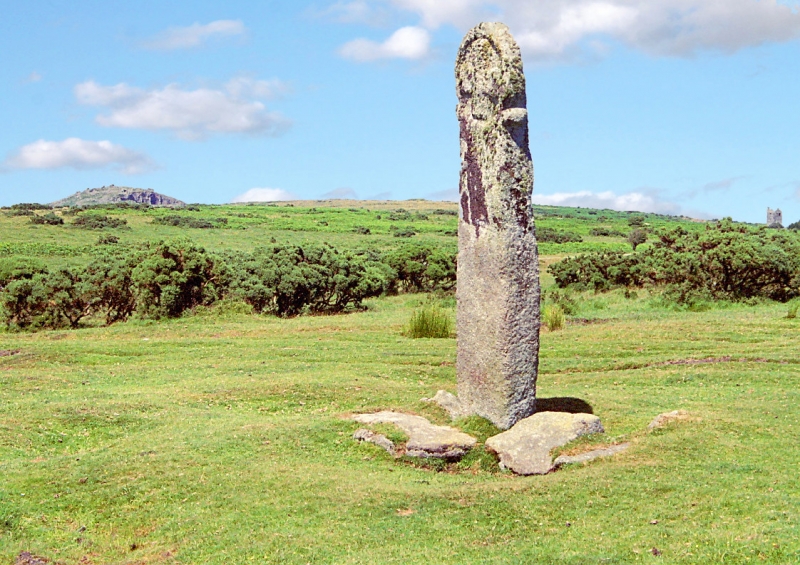 The monument includes a complete medieval cross erected beside a major early
route on the southern edge of Craddock Moor on SE Bodmin Moor. The Longstone
is one of at least three medieval crosses adjacent to this route and the cross
is situated close to extensive areas of broadly contemporary cultivation
ridges.
The Longstone is visible as an upright granite pillar, 2.6m high, with a
distinct lean towards the south. The cross has a circular head, 0.7m in
diameter. The head tapers in thickness from 0.32m at the neck to 0.16m at the
upper edge. This taper is entirely due to a massive irregular flake removed
from the eastern face of the original slab, with the decoration on this face
imposed on the irregular fracture surface; the western face by contrast
continues uniformly the line of the shaft surface. The point at which the head
merges with the shaft is marked by a small raised moulding across each side.
The shaft is of sub-rectangular section, measuring 0.6m NNE-SSW by 0.35m
WNW-ESE at the base. The shaft barely tapers in width from base to neck,
though a slight increase in thickness towards the base is caused by an
increasingly curved, rather than flattened, eastern face.
The cross-head is decorated on each face by a low-relief upright cross with
slightly flared, broad arms, set within a raised periphery. A narrow groove
separates the terminals of the cross-arms from the periphery. Beneath the
head, a plain rectangular panel extends down the upper third of the shaft on
both west and east faces. The panel is defined by a shallow pecked groove
close to each side of the shaft and is closed by a similar groove across the
base. The panel on the eastern face is particularly faint due to surface
erosion, but it is supplemented by another, horizontal, pecked groove across
the upper third of the panel.
Immediately around the cross-base is a group of large slabs, up to 1.5m long,
lying flat on the surface, which represent the remains of packing to support
the cross in position. These slabs still rest firmly against the west and
south edges of the cross-base, with fragments of others embedded in the
surface up to 1m from the cross. A well-defined surface hollow against the
east side of the cross marks the former location of another such slab, removed
by stone robbers. The survival of the Longstone, also called Long Tom, in its
original prominent position beside a well-used routeway has led to its
frequent description in reviews of Cornish monuments since the visits of
antiquaries in the eighteenth century.

Bodmin Moor, the largest of the Cornish granite uplands, has long been
recognised to have exceptional preservation of archaeological remains. The
Moor has been the subject of detailed archaeological survey and is one of the
best recorded upland landscapes in England. The extensive relict landscapes of
prehistoric, medieval and post-medieval date provide direct evidence for human
exploitation of the Moor from the earliest prehistoric period onwards. The
well-preserved and often visible relationship between settlement sites, field
systems, ceremonial and funerary monuments as well as later industrial remains
provides significant insights into successive changes in the pattern of land
use through time.

Wayside crosses are one of several types of Christian cross erected during
the medieval period, mostly from the 9th to 15th centuries AD. In addition to
serving the function of reiterating and reinforcing the Christian faith among
those who passed the cross and of reassuring the traveller, wayside crosses
often fulfilled a role as waymarkers, especially in difficult and otherwise
unmarked terrain. The places so marked might be on regularly used routes
linking ordinary settlements or the routes may have a more specifically
religious function, including providing access to religious sites for
parishioners and funeral processions. Wayside crosses vary considerably in
form and decoration, due in part to their development over the period during
which they were erected, but several regional types have been identified. The
Cornish wayside crosses form one such variant, drawing greatly for their
designs on the local traditions employed for crosses at churchyards, monastic
and market sites. Commonest among these are crosses made from a single slab,
with a round, or `wheel', head on whose faces various forms of cross were
carved. The design was sometimes supplemented with a relief figure of Christ,
with perforations between the cross-arms or mouldings between the head and
shaft, or with decoration on the shaft which can be especially elaborate on
some early examples. Less common forms employed as wayside crosses in Cornwall
include the `Latin' cross, where the cross-head itself is shaped as the arms
of an unenclosed cross, and, much rarer, the simple slab with a low-relief
cross on both faces.
Over 400 crosses of all types are recorded in Cornwall. Of the 35 surviving on
Bodmin Moor, 21 are recorded as wayside crosses. Wayside crosses contribute
significantly to our understanding of medieval religious expression and to our
knowledge of medieval routeways, settlement patterns and the development of
sculptural traditions. All wayside crosses which survive as earth-fast
monuments, except those which are both extremely damaged and removed from
their original locations, are considered worthy of protection.

The Longstone cross has survived well. It is complete, in its original
location and has suffered only very minor disturbance to part of its
stone-setting. Its form and decoration typifies one of the common sub-groups
of Cornish crosses, of which it ranks among the best preserved. Its proximity
to broadly contemporary field systems and its moorland location near a
roadway still in use and marked by other wayside crosses along its course
demonstrates well the organisation of land use during the medieval period, the
function of wayside crosses and the continuity of parts of the route network
from the medieval period to the present day.