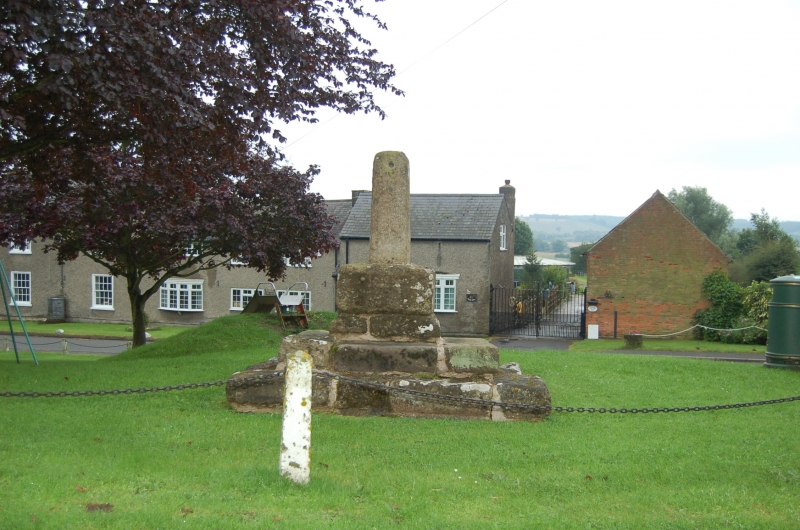 The monument includes the remains of the medieval standing cross located on
the village green in Upper Broughton. The remains comprise a base of two steps
beneath a moulded pedestal and square socket stone surmounted by the lower
portion of a square sectioned shaft. Originally the shaft would have been at
least twice its present height and would have been surmounted by a carved
cross head but these items are now missing, possibly due to post-medieval
iconoclasm.
The stepped base or calvary rises to c.70cm and covers an area of c.2m square.
It consists of a number of eroded limestone blocks which were clearly stapled
together at one time though the staples are now missing. Currently they are
mortared. The 20cm wide pedestal is also constructed of several separate
pieces of stone and has a diamond cut profile. At its widest it is c.85cm
square.
The socket stone or socle is a single block measuring c.75cm square by c.40cm
high. It is not clear whether the top corners were originally chamfered or
whether this effect is due to erosion. Near each corner on the upper surface
of the socle is a round depression measuring c.2cm wide by 1cm deep. It is not
certain what these represent though it is possible they were the housings for
a protective iron fence such as has been added to other crosses in the recent
past. This may also account for the hole driven through the top of the shaft
which is also not an original feature. The surviving portion of the shaft is
c.80cm tall and has a maximum width at the base of 25cm by 20cm. It has
rounded chamfered corners and appears to have tapered slightly towards the
top. All four faces of the shaft bear a simple incised panel which suggests
that there may originally have been some form of surface decoration though
this is no longer obvious. The cross is Listed Grade II.

Although not complete, the cross in Upper Broughton is a reasonably well
preserved example of a medieval standing cross which would have played an
important role in religious festivals and other aspects of medieval village
life.