A Scheduled Monument in Willoughton, Lincolnshire 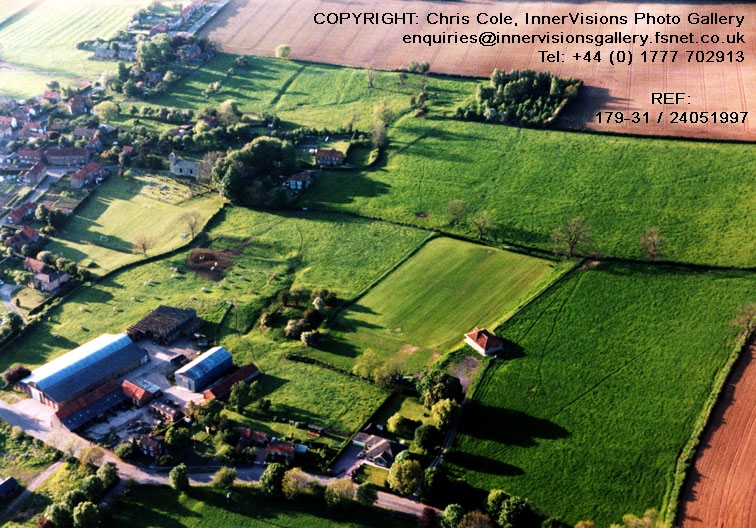 The monument includes Monks Garth, a moated site on the eastern edge of the
village of Willoughton. The remains lie at the bottom of a gentle slope
and take the form of a series of earthworks, including a moated platform, a
pair of ponds and other water-control features, and a group of ditched
enclosures. The site is thought to have formed part of the manor of Waldin the
Engineer which was granted to the Benedictine abbey of St Nicholas in Angers,
France, in the early 12th century. At the end of the 14th century, during the
Hundred Years War, the property was confiscated by the king and in 1441 was
granted to King's College, Cambridge.

The monument is situated in an area of low-lying pasture approximately 100m
south-east of the church of St Andrew. In the south-eastern corner of the
monument is a raised, rectangular platform, approximately 13m x 18m, bounded
on all sides by a moat up to 2m deep and 14m in width. Near the centre of the
platform is a rectangular hollow, approximately 12m square, surrounded on
three sides by a linear bank. These earthworks are considered to represent the
remains of a building which formerly occupied the moated platform.

To the north of the moated site are the remains of its associated
water-control system. The moat, which is spring-fed, drains through a linear
north-south channel which runs from its north-western corner. Adjacent to the
moat on the north are the remains of an external bank, over 30m long and 10m
wide, turning southward into the slope; on its northern side is a narrow
linear channel. These features form an integral part of the water-control
system of the moated site, the bank serving as a dam to retain water in the
moat and the channel to drain the water from the slope on the east into the
outlet channel on the west.

The moat's outlet channel runs northward into a triangular depression, aligned
north-south, approximately 20m long and up to 10m wide. This depression runs
into another, adjacent to the north-west, which is larger and rectangular in
form, aligned east-west, and approximately 55m long and over 15m wide. Along
each of its north, south and west sides is a broad bank and at its north-
western corner are the remains of a shallow outlet channel. These depressions
are considered to represent the remains of a pair of medieval fishponds which
have been altered in the post-medieval period.

In the south-western and north-eastern parts of the monument are a series of
linear ditches on the same alignment as the moated site and fishponds. These
are considered to represent the boundaries of small closes associated with the
moated site which would have been used for cultivation or as animal
enclosures.

All fences and modern paving are excluded from the scheduling but the ground
beneath these features is included.

The medieval moated site at Monks Garth, Willoughton, exhibits a variety of
features including the remains of internal structures and associated ponds and
enclosures and preserves the relationships between them. The remains survive
well as earthworks and buried deposits and waterlogging in the moat and ponds
suggests a high level of survival for organic remains. The site has never been
excavated although the understanding of the monument has been increased by a
detailed archaeological survey.