A Scheduled Monument in Springthorpe, Lincolnshire 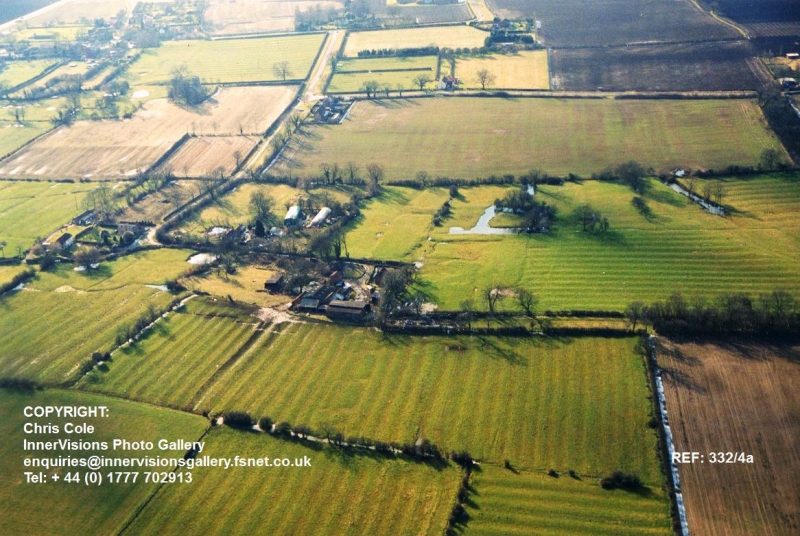 The monument includes a medieval manorial complex immediately north west of
Elm Tree Farm. The complex, lying to the north east of the village church,
represents one of two foci of settlement at Heapham. In 1086 Count Alan held
land at Heapham as part of his manor of Lea; during the 15th and 16th century
this holding thought to have been associated with the moated site, was linked
with the manor of North Ingleby. The visible remains of the complex include a
moated platform, or island, with a series of earthwork features, including
ditched enclosures and remains of medieval ridge and furrow cultivation
covering an area measuring approximately 310m by 240m.

The moated island takes the form of a roughly square platform, measuring 24m
across, completely enclosed by a water-filled moat, 8m to 12m wide. The
surface of the island is slightly uneven, being raised in places above the
general ground level, with a mound at the north west corner. Stone fragments
identified at the northern edge of the island, indicate that the remains of
structures survive on the island.

The moat is linked to the surrounding ditched enclosures via a series of
channels, which also formerly supplied water to the moat. An outlet from the
moat was provided on the western moat arm where a channel, or leat, interrupts
an external bank, to take water toward a ditch, at the western edge of the
complex. The western end of this channel is water-filled and now forms a pond.

Ditched enclosures lie on all sides of the moat. The plots are aligned east -
west and are generally subrectangular in plan, varying in size between 140m
and 150m in length and 40m and 25m in width. To the north of the ditched
enclosures there is a wide boundary ditch, which is now partly water-filled
and forms a pond. At its eastern end this ditch links into a narrower channel
which leads to the south to join the moat at its north eastern corner, from
where a ditch and bank continues to the east. These channels form part of the
system of water management and are thought to represent the original northern
limits of the manorial complex, within which service buildings, paddocks, and
gardens associated with the manor house would have been located.

All fences and water troughs are excluded from the scheduling, although the
ground beneath them is included.

The moated manorial complex immediately north west of Elm Tree Farm survives
well as a series of earthworks and buried deposits. Waterlogging in the moat
and boundary ditches will preserve organic remains (such as timber, leather
and seeds) which will give an insight into domestic and economic activity on
the site. In addition the banks round the moat and ditches will preserve
evidence of the land use prior to their construction.

As one of two foci of settlement, overlying earlier medieval fields, the
complex will preserve valuable evidence of the way in which the components of
the medieval landscape developed and interrelated. Archaeological survey and
documentary research has increased our understanding of the complex.