A Scheduled Monument in Harpswell, Lincolnshire 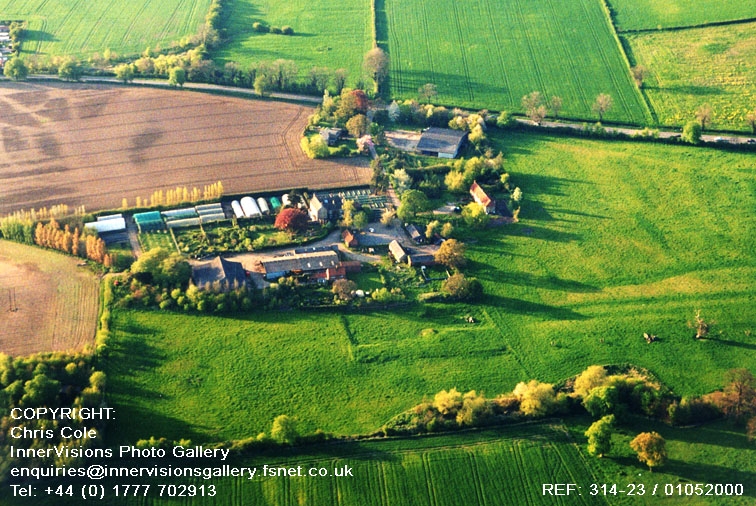 The monument includes the earthwork and surviving extent of the buried remains
of Harpswell Hall, a post-medieval house with formal gardens immediately south
of Hall Farm. In 1086 Harpswell was divided into two manors which both
came into the hands of the Whichcote family by the 16th century. The
settlement which had become established here during the Middle Ages was partly
removed by the Whichcotes in the late 16th or early 17th century when the
house and gardens were established. The Whichcote family remained resident at
Harpswell until 1776 making additions and alterations to the gardens during
the 17th and 18th centuries. Harpswell Hall was demolished in the mid-19th
century and now survives as a buried feature, while the remains of the formal
gardens and part of the earlier settlement are visible as earthworks. The
estate remained in the hands of the Whichcote family until 1918.

The remains of Harpswell Hall are situated in the southern part of the
monument. Depicted on a late 18th century drawing by Nattes, it was an early
17th century H-shaped house with 18th century extensions to the main building.
The location of the buried foundations is indicated by low earthworks.
Immediately to the north of the Hall remains, are the earthworks of a square
sunken garden, measuring 40m in width and up to 1m deep, with a central
circular feature, 20m in diameter, thought to represent a flower bed. A
rectangular extension to the east side of the sunken garden includes opposing
hollows, on the north and south sides, thought to indicate the position of
steps down to the garden or niches for statuary. A buttressed brick wall,
thought to be 18th century in origin, lies immediately to the north of the
sunken garden forming a retaining wall for terraced gardens to the north.

Adjacent to the west of the sunken garden is a raised area indicating the
location of former paths and flower beds, leading toward an ornamental moat
and prospect mound, which lie at the western end of the formal garden.
Approximately 150m to the west of the site of the Hall is an oval mound,
standing roughly 3.5m high, giving a view eastwards over the gardens towards
the Hall and westwards over the surrounding countryside. A gazebo, depicted in
the 18th century drawing of the house and gardens, formerly stood on top of
the mound.

Approximately 150m to the south west of the Hall lies the ornamental
water-filled moat which may reuse or adapt an earlier manorial site. The moat
arms, measuring up to 20m in width, create the effect of a broad angled canal
enclosing three sides of a rectangular island. Access to the island, which is
about 80m in length, is via a broad causeway on the eastern side of the island
which is closed by a buttressed brick wall with a central opening, thought to
be 18th century in date. Water is supplied to the moat via a stream flowing in
at its south eastern corner. The moated site is raised at its western end
above the general ground level where it is lined by an external bank.

To the east of the ornamental moat the course of the stream was widened to
produce a serpentine water feature, believed to be associated with alterations
undertaken in the mid-18th century by Thomas Whichcote to create an informal
garden and park in keeping with the landscaping ideas of the time. Whichcote
family correspondence from the period indicates that the garden and parkland
features were maintained at least until the latter part of the 18th century. A
shallow rectangular hollow on the south side of the hall is believed to have
formed part of the serpentine or an associated water feature and is included
in the scheduling. The meandering course of the now defunct serpentine to the
east of the hall is not included in the scheduling.

Extending eastwards from the sunken garden is a broad embanked avenue,
approximately 250m in length. Originally lined with trees along the south
side, the avenue provided a vista of the village church beyond its eastern
end, and remained in use during the 19th century. A brick wall, aligned
north-south, which survives as a buried feature, is believed to indicate the
eastern extent of the formal gardens.

A hollow way lies to the north of, and parallel to the post-medieval avenue.
The hollow way represents the remains of an earlier thoroughfare associated
with the former medieval settlement now largely overlain by the formal
gardens. Low banks at right angles to the hollow way are thought to indicate
the position of former village property divisions.

All fences are excluded from the scheduling although the ground beneath them
is included.

Post-medieval formal gardens are garden arrangements dating between the early
16th and mid-18th centuries, their most characteristic feature being a core of
geometric layout, typically located and orientated in relation to the major
residences of which they formed the settings. Garden designs of this period
are numerous and varied, although most contain a number of recognisable
components. For the 16th and 17th centuries, the most common features are
flat-topped banks or terraces (actually raised walkways), waterways, closely
set ponds and multi-walled enclosures. Late 17th and 18th century gardens
often reflect the development of these ideas and contain multiple terraces and
extensive water features, as well as rigidly geometrical arrangements of
embankments. Other features fashionable across the period include: earthen
mounds (or mounts) used as vantage points to view the house and gardens, or as
the sites of ornate structures; `moats' surrounding areas of planting; walled
closes of stone or brick (sometimes serving as the forecourt of the main
house); and garden buildings such as banqueting houses and pavilions. Planted
areas were commonly arranged in geometric beds, or parterres, in patterns
which incorporated hedges, paths and sometimes ponds, fountains and statuary.
By contrast, other areas were sometimes set aside as romantic wildernesses.
Formal gardens were created throughout the period by the royal court, the
aristocracy and county gentry, as a routine accompaniment of the country seats
of the landed elite. Formal gardens of all sizes were once therefore
commonplace, and their numbers may have comfortably exceeded 2000. The radical
redesign of many gardens to match later fashions has dramatically reduced this
total, and little more than 250 examples are currently known in England.
Although one of many post-medieval monument types, formal gardens have a
particular importance reflecting the social expectations and aspirations of
the period. They represent a significant and illuminating aspect of the
architectural and artistic tastes of the time, and illustrate the skills which
developed to realise the ambitions of their owners. Surviving evidence may
take many forms, including standing structures, earthworks and buried remains;
the latter may include details of the planting patterns, and even
environmental material from which to identify the species employed.
Examples of formal gardens will normally be considered to be of national
importance, where the principal features remain visible, or where significant
buried remains survive; of these, parts of whole garden no longer in use will
be considered for scheduling.

The foundations of the post-medieval house and formal gardens at Harpswell
Hall survive well as a series of earthwork and buried deposits. The buried
remains of the post-medieval hall will include information concerning its
extent, construction and subsequent alterations. Established and maintained by
one well-known family over a period of time it will contribute to an
understanding of the development of a high status component of the post-
medieval landscape.

The garden remains reflect the changing social expectations, aspirations and
tastes of the period, and the buried garden remains will include further
information on layout and design. Waterlogging in the ornamental moat will
preserve evidence such as seeds, for the past environment of the site. In
addition, the artificially raised ground surface will preserve evidence of
land use prior to the construction of the gardens. The association of the
post-medieval remains with those of a medieval settlement demonstrates the
development of the site over a period of nearly a thousand years and the
buried remains of the settlement will include archaeological information about
its form and layout. As a result of documentary research and archaeological
survey the site is quite well understood.