A Scheduled Monument in Pilham, Lincolnshire 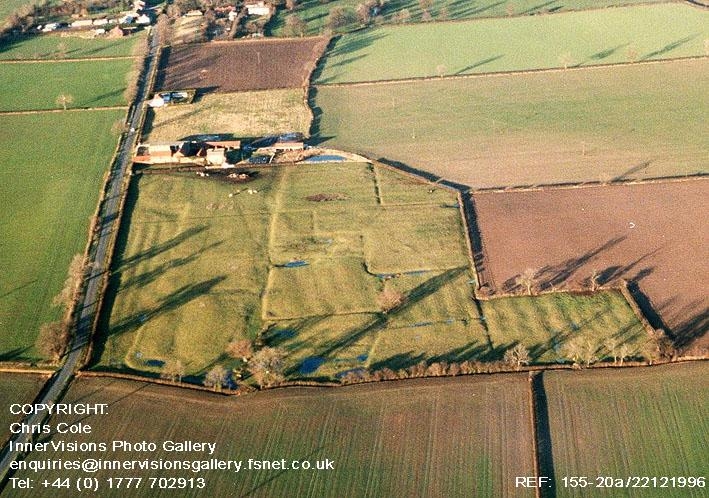 The monument includes the full extent of surviving remains of the village of
Gilby, which was established by the early 12th century and occupied throughout
the medieval and post-medieval periods. The first reference to the village in
historical documents occurs in 1138-9. Throughout the medieval period it is
recorded as a secondary settlement to Pilham, which lies 0.5km to the north. A
source of 1616 indicates that Gilby had become partly depopulated by that
date, although it continued to be occupied as a small hamlet through the 17th
and 18th centuries. By 1842 it was finally reduced to a single farm.

Gilby is situated on a small knoll on the eastern side of the Trent Valley.
The surviving remains of the medieval village occupy a south-facing slope
adjacent to Gilby Farm, and take the form of a series of substantial
earthworks standing up to 0.5m-0.7m in height. Extending north-south down the
slope through the middle of the settlement is a long linear depression or
hollow way representing the principal road through the village before the
present Corringham Road was established across earlier fields to the west.

Along the western side of the hollow way are a series of four raised
rectangular enclosures representing house plots. Adjacent to the rear of
these plots are lower-lying remains of ridge and furrow cultivation. They
represent the only surviving part of a large open field which formerly
extended to the west of the village. Further remains of ridge and furrow are
evident on the east side of the hollow way, where ditches mark post-medieval
enclosures established over earlier fields. A series of depressions at the
centre of the monument indicates the remains of a group of post-medieval
buildings which were still standing in the early 19th century.

In the southern part of the settlement, medieval and post-medieval enclosures
have been laid out on low-lying ground near the stream, separated by a linear
bank from further remains of ridge and furrow cultivation to the east. The
monument thus includes the only surviving parts of a once extensive area of
open fields cultivated by the medieval occupants of the village of Gilby.

Medieval villages were organised agricultural communities, sited at the centre
of a parish or township, that shared resources such as arable land, meadow and
woodland. Village plans varied enormously, but when they survive as
earthworks their most distinguishing features include roads and minor tracks,
platforms on which stood houses and other buildings such as barns, enclosed
crofts and small enclosed paddocks. Villages were the most distinctive aspect
of medieval life in central England, and their archaeological remains are one
of the most important sources of understanding about rural life in the five or
more centuries following the Norman Conquest.

Medieval settlements were supported by a communal system of agriculture based
on large, unenclosed open arable fields. These large fields were subdivided
into strips (known as lands) which were allocated to individual tenants. The
cultivation of these strips with heavy ploughs pulled by oxen-teams produced
long, wide ridges, and the resultant `ridge and furrow' where it survives is
the most obvious physical indication of the open field system. Individual
strips or lands were laid out in groups known as furlongs, which were in turn
grouped into large open fields. Well preserved ridge and furrow, especially
in its original context adjacent to settlement earthworks, is both an
important source of information about medieval agrarian life and a distinctive
contribution to the character of the historic landscape.

The medieval settlement of Gilby, and the remains of its open field system,
survive well as a series of substantial earthworks. As a result of detailed
archaeological survey and historical research they are quite well understood.
The remains of house plots will preserve valuable evidence for domestic and
economic activities on the site through both the medieval and post-medieval
periods, giving an insight into the lifestyle of the inhabitants. The
association of the village remains with those of its open fields will also
preserve evidence for the economy of the settlement and its place in the wider
medieval landscape.