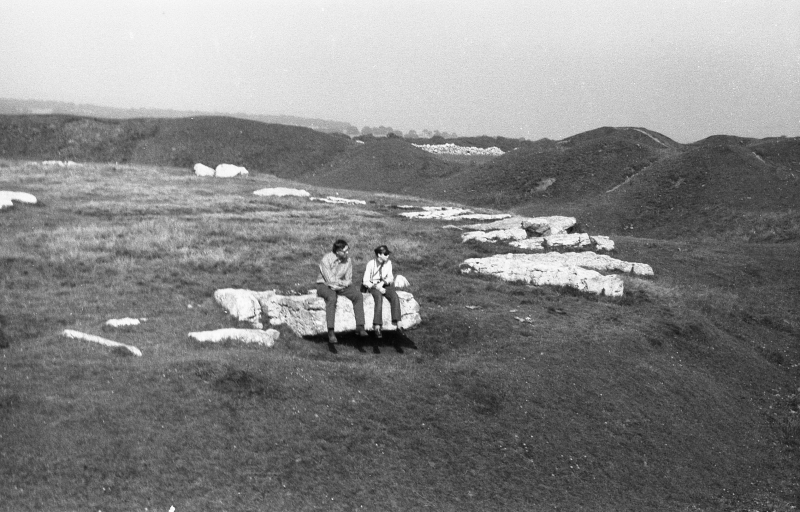 The monument is situated in the central uplands of the limestone plateau of
Derbyshire and includes, within two areas, Arbor Low henge and stone circle,
the linear bank adjoining the henge, and the bowl barrow superimposed on the
east side of the henge bank.
The henge comprises a massive bank and internal quarry ditch surrounding an
oval area with a diameter of c.40m by 52m. The ditch varies between 7m and 12m
wide and has been demonstrated by Gray, who carried out partial excavations of
the site in 1901-2, to have been 2-3m deep originally with steep rock-cut
sides. The bank, which is c.2m high and between 8m and 10m wide, is roughly
circular and has an external diameter of 90m by 85m. It is estimated
originally to have been c.3m high and is broken by two entrances, one to the
north-west and the other to the south-south-east. The ditch is crossed by
causeways at the entrances, the former 9m wide and the latter 6m wide. Gray
excavated both terminals of the ditch at the north-west entrance, uncovering
the remains of bone and antler tools, flint flakes and a number of flint
artefacts which included scrapers, a leaf-shaped arrowhead and a barbed and
tanged arrowhead. Traces of fire were also found, together with a series of
ledges which Gray interpreted as steps. Antler tines were found at the south-
south-east entrance and are also taken to be the remains of tools used to
construct the henge. A stone in this entrance, and a corresponding pit in the
north-west causeway, indicate that both entrances may originally have
contained portal stones.
Within the henge are the remains of a large irregular stone circle originally
comprising 41-43 upright limestone slabs. Of these, only one is still standing
and several are broken so that there are now more than 50 stumps and
fragments. The stones were roughly equally spaced in the ring and varied in
height between 1m and nearly 3m with the tallest stones standing near the
entrances of the henge. At the centre of the circle is a ruined stone-setting
called the cove which consisted of at least six stones believed to have been
set in a rectangle. Gray excavated part of the cove and found, on the east
side, within an oval arrangement of large blocks, an extended skeleton laid
with its head to the south-south-east. Several metres north-east of this he
found traces of another human burial, in a pit disturbed by an earlier
unrecorded excavation. A further burial was found outside the circle in 1845
when Thomas Bateman partially excavated the large bowl barrow superimposed on
the south-east side of the henge. This barrow, which is c.21m in diameter and
survives to a height of c.2.5m, was at least partly constructed from material
taken from the henge bank and so, in its present form, must be of later date.
However, near the centre of the barrow, on the old land surface, Bateman found
a limestone cist or grave containing, in addition to the remains of a human
cremation and artefacts of flint and bone, two unusual pots which are similar
to Late Neolithic Peterborough ware. The dating of these pots, and the
location of the cist on the old land surface, indicate that the burial may in
fact be earlier than the barrow and predates or is contemporary with the
henge. The construction of the barrow suggests the later re-use of the burial
place, probably in the Bronze Age.
Leading southwards from the henge is a bank and ditch which extends for
c.150m. To the south of this, a further section turns westward through Gib
Hill plantation and is c.200m long. Between the two there is a gap of c.70m
which contains no visible earthworks but may contain the buried remains of an
intervening section of bank and ditch: however, this area is not included
in the scheduling as the extent and state of survival of the remains is not
sufficiently understood. In both upstanding sections of the earthwork, the
bank is 2-3m wide and less than 1m high while the shallow ditch is c.6m wide
and lies to the east of the bank. Gray carried out an excavation at the
junction of the bank with the henge and found it to be later than or
contemporary with the latter. Despite its sometimes being referred to as "the
avenue", the feature is not thought to be a formal structure related to the
henge as it does not lead to an entrance. Instead it is interpreted as a field
boundary and has yet to be precisely dated.
All modern field walls and fencing crossing the monument are excluded from the
scheduling although the ground beneath these features is included. Together
with nearby Gib Hill, the henge, stone circle and barrow have been in State
care since 1884.

Henges are ritual or ceremonial centres which date to the Late Neolithic
period (2800-2000 BC). They were constructed as roughly circular or oval-
shaped enclosures comprising a flat area over 20m in diameter enclosed by a
ditch and external bank. One, two or four entrances provided access to the
interior of the monument, which may have contained a variety of features
including timber or stone circles, post or stone alignments, pits, burials or
central mounds. Finds from the ditches and interiors of henges provide
important evidence for the chronological development of the sites, the types
of activity that occurred within them and the nature of the environment in
which they were constructed. Henges occur throughout England with the
exception of south-eastern counties and the Welsh Marches. They are generally
situated on low ground, often close to springs and water-courses. Henges are
rare nationally with about 80 known examples. As one of the few types of
identified Neolithic structures and in view of their comparative rarity, all
henges are considered to be of national importance.

Arbor Low henge is a very well-preserved example of a Class II henge and
displays a high diversity of features including burials, an associated linear
earthwork, a stone setting, roughly opposed entrances and a later bowl barrow.
Bowl barrows are prehistoric funerary monuments dating from the Late Neolithic
to the Late Bronze Age (c.2400-1500BC). Constructed as rubble or earthen
mounds covering single or multiple burials, they are particularly
representative of their period and provide important evidence on burial
practices and social organisation among early prehistoric communities. Within
the henge is a large irregular stone circle. Stone circles of this type
comprise a ring of at least 20 stone uprights with a diameter of between 20m
and 40m. The uprights tend to be more closely spaced than in other types of
circle and the height and positioning of the stones appears not to have been
as important. Where excavated, stone circles of all classes have been found to
date from the Late Neolithic to the Middle Bronze Age (c.2400-1000BC) and,
though we do not fully understand the uses for which they were constructed, it
is clear they had considerable ritual importance for the societies that used
them, often providing a focus for burials and funerary rituals and sometimes
having a calendrical function, helping mark the passage of time and the
seasons. Large irregular stone circles are widely distributed throughout
England, although in the south they are largely confined to the west. Only 45
of the 250 or so stone circles identified in England are classed as large
irregular circles. Therefore, as a rare monument type which provides an
important insight into prehistoric ritual activity, all surviving examples are
worthy of protection.