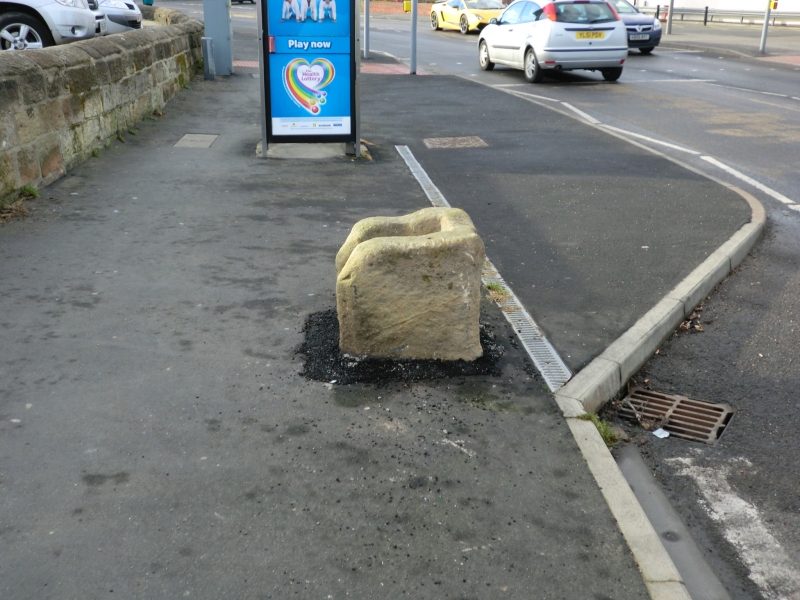 Entry Name: The Wishing Chair Cross cross base at junction of Stakesby Road and Westbourne Road

The monument includes a cross base known as the Wishing Chair situated on the
pavement at the south side of the junction of Stakesby Road and Westbourne
Road in Whitby. This was the base for a mile cross of the medieval period
defining the approach to the abbey at Whitby.
The cross base survives as a block of local fine yellow sandstone with an
oblong depression cut into the top to serve as a socket and the north edge of
the socket broken away to form what looks like a chair. The block measures
0.58m across and 0.55m deep and is 0.49m high from the surface of the
pavement. The socket is 0.34m by 0.25m and 0.24m deep.
There is a strong local tradition that a child seated in the chair will have
their wish come true. The modern cross set up on the opposite side of the road
in 1957 is a commemoration of the Festival of Britain and also defines the
mile bounds of the abbey. Such crosses were common in the medieval period to
mark the entrance of the holy precinct of a religious house. The place name
Stoupe Cross Farm to the south east of the abbey may mark the location of
another cross.
The surface of the pavement, the telephone box and the wall on the south side
are excluded from the scheduling but the ground beneath the cross is included.

The Wishing Chair cross survives as a base only but its position is original
and so marks an important land boundary of Whitby Abbey.