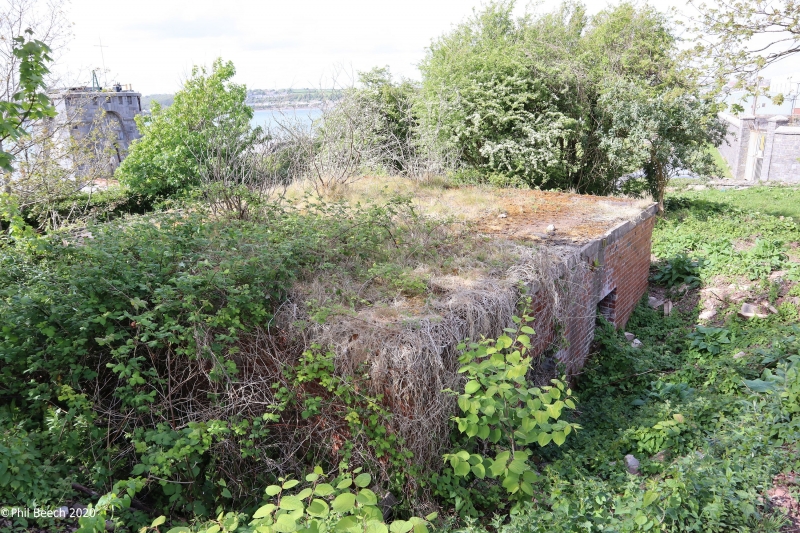 The monument comprises a small complex of structures at the west end of Fort Road, Pembroke Dock. The remains of two bomb store buildings with earth embankments are set in scrubby woodland behind a blast wall which is sited just above the mean high water mark of Fort Road beach. The form of the buildings corresponds to the standard military drawing 3054/36, being brick-built, square and flat-roofed with three openings to the front. The cut-off remains of steel girders provide evidence for the former presence of bomb handling gantries, and the surviving metal doorframes confirm the original inclusion of steel doors (as specified). Bomb stores to this design are found on aerodromes dating to the expansion period (1934 - 39), giving a clear indication of the date of these structures. However, the arrangement of buildings, earth revetments and blast-wall is not typical of an aerodrome plan, most probably reflecting restricted space and the adaptation of a standard aerodrome plan to accommodate the needs of the Pembroke Dock flying boat station.

The monument is of national importance as a well preserved relic and for its potential to provide evidence relating to the build-up of national defences in the inter-war period. Structures from the expansion period incorporated lessons learned from world war I, but were not the hurried and often temporary structures seen throughout world war II. As such, they contain significant potential to inform us about developments in military thinking and technology. The monument is well-preserved, its survival demonstrates both adherence to military plan, and local adaptations which departed from it. It has significant group value with other military structures around Pembroke Dock which are associated with the flying boat station.

The scheduled area comprises the remains described and an area within which related remains may be expected to survive. It is trapezoidal, measuring 73m x 31m at its widest points, and has an area of 0.21ha