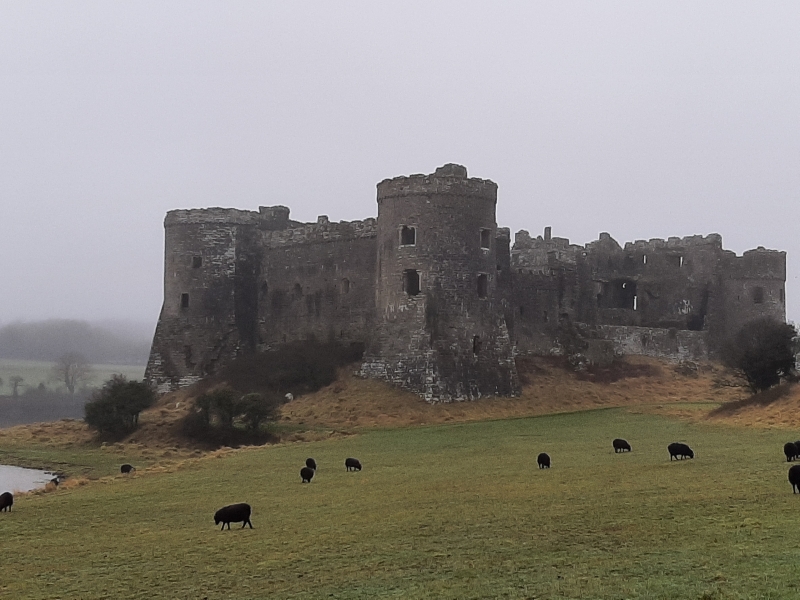 The monument consists of the remains of a castle, dating to the medieval period. The castle is situated on a low ridge which commands a crossing point of the Carew River at its tidal reach and was first established, on the site of earlier prehistoric and later fortifications c 1100 by Gerald of Windsor. Subsequently it was held by the de Carew family who constructed the late thirteenth-early fourteenth century building present today which has seen later modifications and additions. It comprises three towered ranges set about a courtyard, with a walled forecourt to the east beyond which is the remains of an outer court. The great hall is in the western range, flanked by two great towers that rise above spurred bases. The chapel is in a polygonal tower projecting into the forecourt. In 1480 the castle was disposed of by Sir Edmund Carew to Rhys ap Thomas who had supported Henry Tudor (Henry VII) after his landing at Milford Haven. The castle was then remodelled into a comfortable Tudor palace with additions intended to achieve a more contemporary, uniform and decorative whole. A small gatehouse was built leading into the outer ward at this time. The downfall of Rhys ap Thomas’s descendants meant that in 1558 the castle was granted by the crown to Sir John Perrot. He removed the castle’s northeast tower and north curtain to construct a great north range of five rooms, the second floor of which is occupied by a gallery over 40m in length; the façade of this building is typically Elizabethan. Extensive gardens and orchards were developed around the castle particularly to the east where the main approach was through grassy courts with gardens to either side. A walled garden survives together with earthworks of both gardens and buildings, including the sites of ox-houses. West of the castle are the remains of a terraced garden facing the river and earthworks thought to include the sites of lime kiln, stables and a small dock or landing-stage. The castle was refortified during the Civil war and a low bank outside the middle gatehouse is the remains of an angular redan for artillery, south of the castle a broad L-shaped ditch may also relate to this period. Sir John Perrot had been convicted of treason in 1592 and the castle subsequently let out to tenants, the resulting general decline led to its final abandonment about 1686.