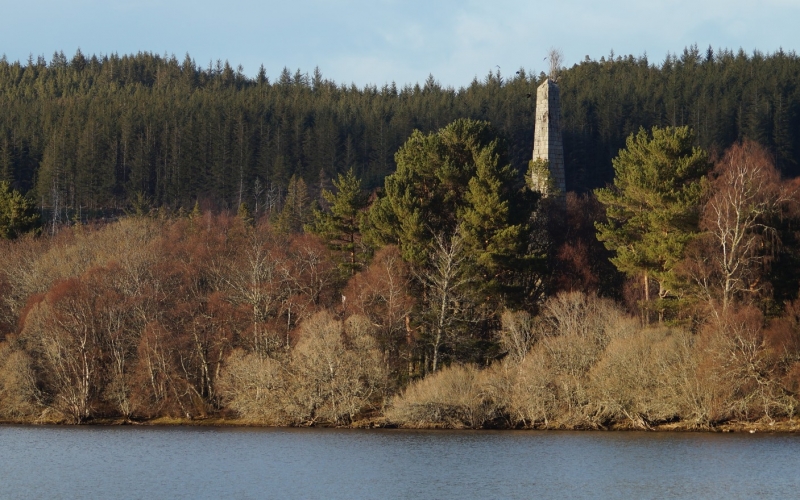 The monument comprises a largely artificial island in Loch Moy which was fortified, probably during the Middle Ages and which, by the 17th century, supported a laird's house along with a considerable number of service buildings. The island also supports a B-listed obelisk (HBNUM 14889). Since its last occupation, the surrounding loch has been drained and considerably lowered, and much of the island is covered in low vegetation and trees.

The draining of the loch has exposed the natural rise of what was once the loch bed and that may have formed a small natural island with gently sloping sides. The higher elements of the island have been heavily modified, with near vertical edges steeply rising around the circumference of the interior. The interior was divided into two parts that a raised walkway, now 0.6 m high and almost 2 m across, perhaps initially separated and linked. In places a 0.3 m high, 1 m wide lip is visible around the circumference of the level surface of the interior, indicating that this once formed an outer ring-work or castellated wall.

The enclosure wall may be contemporary with occupation attributed to the site in the 14th century by oral historical tradition, recorded in the late 18th century, both locally and in Moidart, linking the 'Isle' or 'Castle' to the chiefs of the Mackintosh lineage/Clann Mac an Tiosich. Written evidence for the site's occupation belongs to the 17th century when a number of documents were signed on the island. In the 1790s, a local writer and the Old Statistical Account record almost verbatim passages. These describe the island as comprising an abandoned house containing four fire-rooms, the remains of a street running the length of the island with the foundations of buildings visible on either side, and a garden with a gate bearing an inscription dating its construction to Lachlan, the 20th Laird of Mackintosh, in 1665.

The gate no longer survives, but the ruined remains of the house remain on the southern half of the island. The S gable still stands to 2.7 m in height, indicating a multi-storeyed dwelling, with mortared walls 1 m thick and an interior measuring 15.75 m long from N to S, by 4.65 m transversely. Much of the interior is now infilled with rubble. A drystone structure, measuring 6 m by 4.5 m, has been built onto the southern end. Only the footings of some of the external buildings remain at the southern end of the S island.

Cartographic evidence, provided by Robert Gordon and General Roy, additionally indicates occupation of the island in the 17th and mid-18th centuries.

Much of the northern and central area of the southern island has subsequently been capped by a 0.3 m deep layer of concreted pebbles, associated with the construction of the large early 19th-century obelisk. A well-built causeway/boat noost, with iron rings inserted into it, extending to the W of the southern island may also belong to this phase.

With the exception of the raised walkway, no remains are visible through the undergrowth on the northern island.

The area to be scheduled is irregular polygon on plan, to cover the whole surface of the island, its associated structures and archaeological deposits, as marked in red on the accompanying map. The scheduling excludes the above-ground elements of the B-listed obelisk.

Intrinsic characteristics: The well-preserved structural remains chart developments in the dwelling patterns and architectural styles employed by the upper strata of Gaelic/Highland society, from the construction of modified islands, to a castellated monument form resembling a motte-and-bailey, and eventually a more genteel domestic dwelling with a range of supporting outbuildings. The draining of the loch means that there is little likelihood of the preservation of waterlogged deposits at the surface of the island, and in parts this will be exacerbated by the growth of trees. However, the lower portions are likely to remain waterlogged, and the build up of deposits over numerous phases of occupation means that there is a high potential for well-preserved structural, environmental and other archaeological deposits to have survived. This evidence can provide essential information for the future study of the status, life-style and consumption patterns of the island's occupants and for how they lived in and interacted with the communities and environments within the surrounding landscape.

Contextual characteristics: These types of monument sit at the centre of medieval and post-medieval Gaelic/Highland lordships. This example has the potential to inform future research into the mechanics of those lordships. In particular, it can tell us about how people might use island occupation to fulfil a multitude of roles, including display, defence and domesticity, and to demonstrate reclusiveness or accessibility. Developments at this site can therefore illuminate changes in the practice of lordship in this region, as well as its cultural and architectural accoutrements. This lordship sat on the border between the Highlands and the Lowlands, each with differing cultural concepts of society, religion and politics. Central Highland lordships were also very different in practice from those Gaelic lordships further N and W. Study of this monument, when compared with those from elsewhere, has the potential to reveal much about the interactions of these spheres of Scottish society.

Associative characteristics: The later stages of occupation on this island reveal how Highland lairds in the 1600s and 1700s were adopting Lowland architectural styles and practices, such as building gardens.

The monument is of national importance because it is a fine example of monument of its type, reflecting changes in the practice of Gaelic/Highland lordship. This includes developments in the architectural styles employed to demonstrate the cultural and social position of the social elite during the transformation of the heads of the Clann Mac an Toisich/Mackenzies from lords to chiefs and eventually lairds. The likelihood of preserved archaeological and environmental remains has the potential to support and sustain future research into life, society and culture in this part of the Highlands. Differences between this monument and others of a similar type elsewhere in the Highlands and the rest of Scotland can reveal much about the local and wider social, political and cultural interactions between lords in this region, fellow Gaels and Lowlanders. The loss of this example would severely hinder our understanding of these issues.

Meldrum E A 1972, LOCH MOY AND ITS ISLANDS. HIGHLAND INDUSTRIES AT MOY HALL.

Stuart J 1868, 'Notice of a group of artifical islands in the Loch of Dowalton, Wigtonshire, and of other artificial islands or Crannogs throughout Scotland', PROC SOC ANTIQ SCOT, 1868, 18-20.