A Scheduled Monument in Aird and Loch Ness, Highland 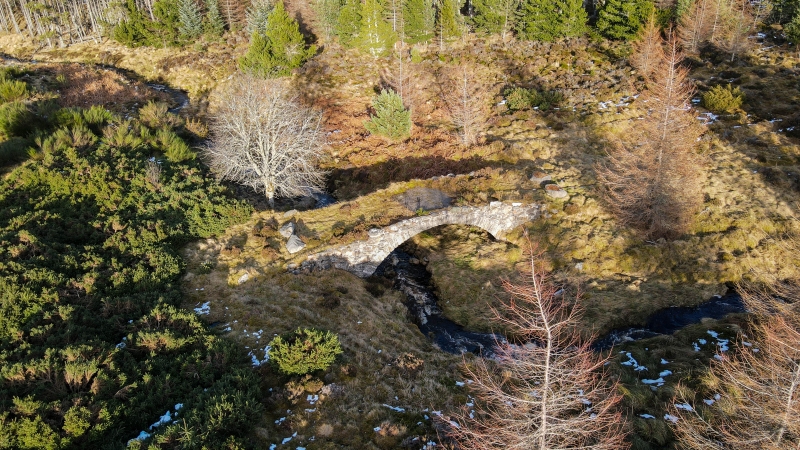 The monument consists of a length of military road and bridge over the Midlairgs Burn, to the SSE of Mid Lairgs.

The road is a section of the Dunkeld to Inverness military road that was built following a recommendation in a memorial on the state of the Highlands presented to George I in 1724 by Lord Lovat. Following inspection of the area by Major-General George Wade later that year, Wade advocated the re-establishment of Highland companies, the construction of a number of forts, and the provision of a boat on Loch Ness. The construction of a network of roads to enable rapid troop movement was an essential concomitant of this proposal. Wade was soon afterwards appointed Commander-in-Chief of North Britain, and the first of the network of roads was being built in 1725. Construction of the road from Dunkeld to Inverness, a length of 102 miles, took place in 1728-30.

By 1809 the road was showing signs of decay, and the Commissioners for Highland Roads and Bridges said it had been constructed 'without regard to the rugged nature of the country', following which there was extensive reconstruction.

The bridge, which is well preserved, has a single arch of segmental curvature, constructed of whin rubble, with little of any parapet now surviving; it has a modern metalled surface. The road to either side survives as a clearly defined grassed over hollowed track

The area to be scheduled is linear in plan, varying slightly in width, to include the road, bridge and an area around in which evidence for their construction and use may survive, as marked in red on the accompanying map.

Intrinsic characteristics: The structure of the bridge (apart from the parapet) and the line of the road are particularly well preserved. The state of preservation has benefited from the fact that this stretch of road is no longer on the line of the modern road and has therefore been unaffected by modern transport requirements.

Contextual characteristics: The stretch of road and the bridge together provide a valuable illustration of the relationship between the early 18th-century military roads and the Highland landscape through which they ran, despite the changes that were presumably made after 1809.

Associative characteristics: The 18th-century 'pacification' of the Highlands, in response to the Jacobite threat, and the Rising of 1715 in particular, resulted in a network of fortifications and roads that are an important feature of the early modern history of what had come to be known as North Britain. A well-preserved section such as this is particularly to be valued. Its direct association with General Wade adds to its interest.

The monument is of national importance as a particularly well-preserved example of a length of military road and a bridge crossing dating from the earlier 18th-century 'pacification' of the Highlands, and as remodelled in 1809.

RCAHMS record the monument as NH73NW42, and it is recorded in the Highland SMR as NH73NW0049.