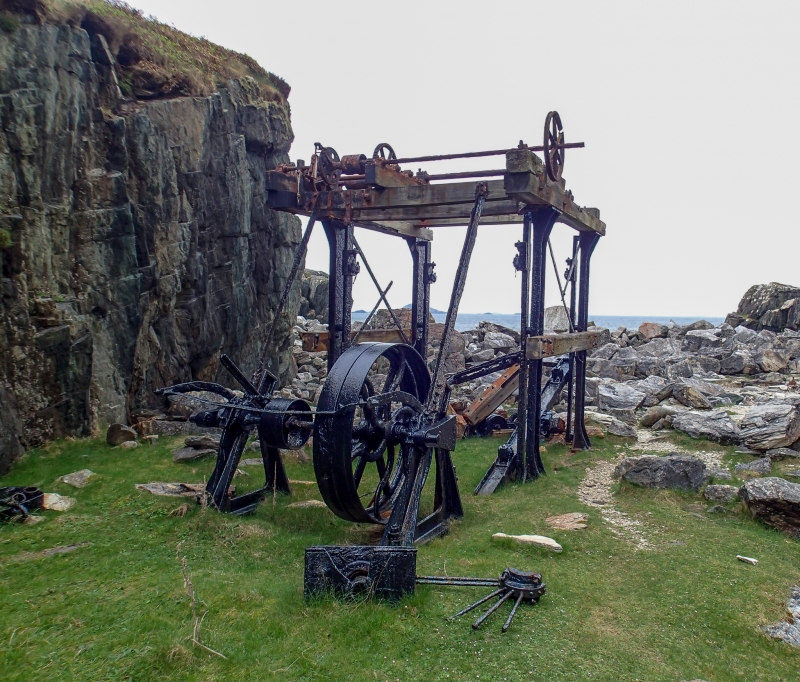 The monument consists of the remains of a marble quarry and of its associated equipment and buildings. When first scheduled in 1992, it was wrongly located on the map. This re-scheduling corrects that error. The remains include a stone saw, gas engine, gas producer, countershaft, hand crane of derrick type, rail trolleys, water tank and quay, together with waste heaps. The cutting saw and some other of the machinery is known to have stood within a building when the quarry was in production.

At the N end of the area, further up the ravine in which the quarry lies, stand the remains of two buildings. One, of stone-built rubble construction, is known in Gaelic as 'the ruined house of the lowlanders'.

It appears to have been used by quarrymen active in the late 18th century. Close by are the stone and concrete footings of a later building, thought to be contemporary with the use of the quarry during the early 20th century. It is said that this acted as a bunkhouse for the quarrymen and that the metal superstructure survives in use, having been moved to Baile Mor. The main period of use of the quarry lasted from 1905 to 1914, since when marble has not been quarried on Iona on an extensive scale.

The scheduled area is irregular in shape, measuring approximately 215m N-S by a maximum of 80m E-W. This includes the quarry and its worked faces, the surviving machinery, and an area where evidence may survive of earlier working, and in which evidence relating to the use of the quarry may survive. This area is shown in red on the accompanying map extract.

The monument is of national importance as the only known quarry of early 20th century date still retaining original stoneworking and handling equipment. Marble quarrying is rare in Scotland, but Iona was briefly celebrated for it. The seam of marble has been known for many centuries, and the visible remains may conceal evidence of working of the medieval or earlier period.