A Scheduled Monument in Howe of Fife and Tay Coast, Fife 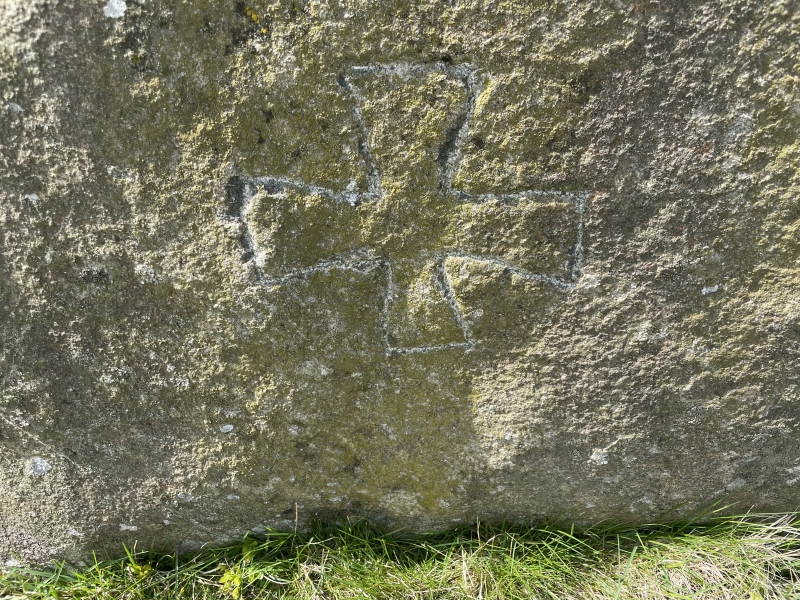 The monument comprises a large natural boulder, partially dressed on its N face, on which is carved a cross and a symbolic fish. The carvings are probably Early Christian or medieval in date.

Two symbols have been carved on the N face. Approximately in the centre of the lower part is a confident carving of a plain cross, c. 23cm wide, with expanded ends and a connecting ring. On the upper part is a crude representation of a fish, c. 25cm across, with a circular recessed 'eye' and trailing 'fin'. It is possible that the two carvings are not by the same hand. No other carvings are visible on this or the surrounding stones. The carvings are in poor to moderate condition; the cross is better preserved than the fish.

The area to be scheduled is centred on the boulder and is circular in shape. It encompasses an area of radius 15m around the boulder, to afford protection to the boulder and its carvings and to any surviving traces of human activity nearby. The area is shown in red on the accompanying map.

The monument is an important recently-noted addition to the corpus of Early Christian or medieval carvings, especially notable for its apparently symbolic location and its remoteness from established Christian sites. It is also notable as an apparently opportunistic work, carved on a natural boulder in its original position.

The precise age of the carvings is uncertain, but the stone is highly likely to have been carved sometime between AD 800 ' 1500. The carvings of the cross and the fish may have been done by different hands at different periods. It is possible that traces of associated activities may survive in the immediate vicinity.