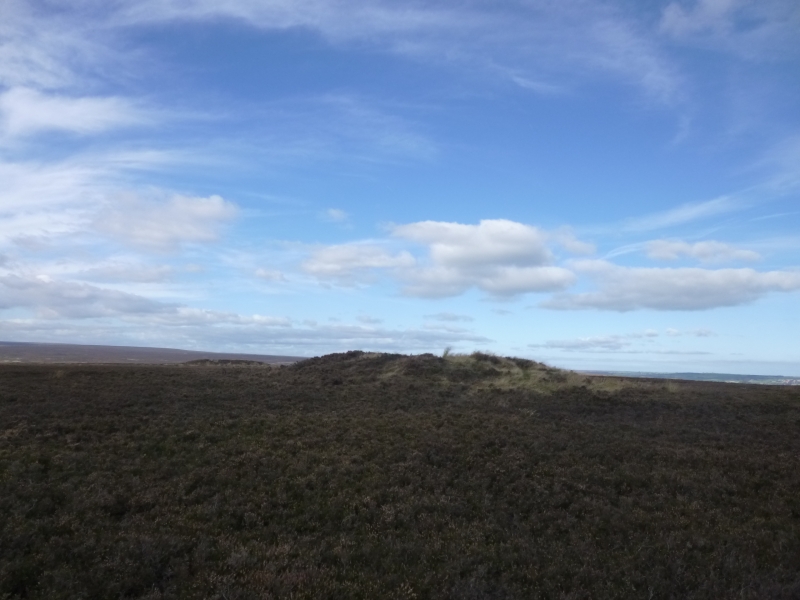 The monument includes two round barrows which occupy a prominent ridge-top
position on Two Howes Rigg. It lies on Middle Jurassic sandstone on the
North York Moors. The two barrows are in two separate areas of protection.

Each barrow has a well-defined sub-circular mound constructed from earth
and stone. Both have hollows in the centre left by partial excavation in
the past.

The north western mound measures 20m in diameter and stands up to 1.3m
high, although it has been augmented on the north western edge by spoil
from the partial excavation and it is up to 1.7m high here. The mound was
originally constructed with an internal kerb. This would have been a
circle of large stones or boulders, about 15m-16m in diameter, included
within the matrix of the mound, and some of these stones are visible where
the mound surface has become eroded.

The barrows are surrounded by many other prehistoric monuments,
particularly further burials, which are often located in prominent and
highly visible locations in the landscape.

Despite disturbance from excavation in the past and modern erosion, the
Two Howes have significant surviving archaeological deposits. These will
preserve information about the date and original form of the barrows and
the burials placed within them. Evidence for earlier land use and the
contemporary environment will also survive beneath the mounds.

Clusters of burial monuments, such as this pair of barrows, provide
important insight into the development of ritual and funerary practice
during the Bronze Age. The barrows lie close to a number of other
prehistoric monuments and these associations contribute to our
understanding of prehistoric landscape exploitation.