A Scheduled Monument in Burton-in-Kendal, Cumbria 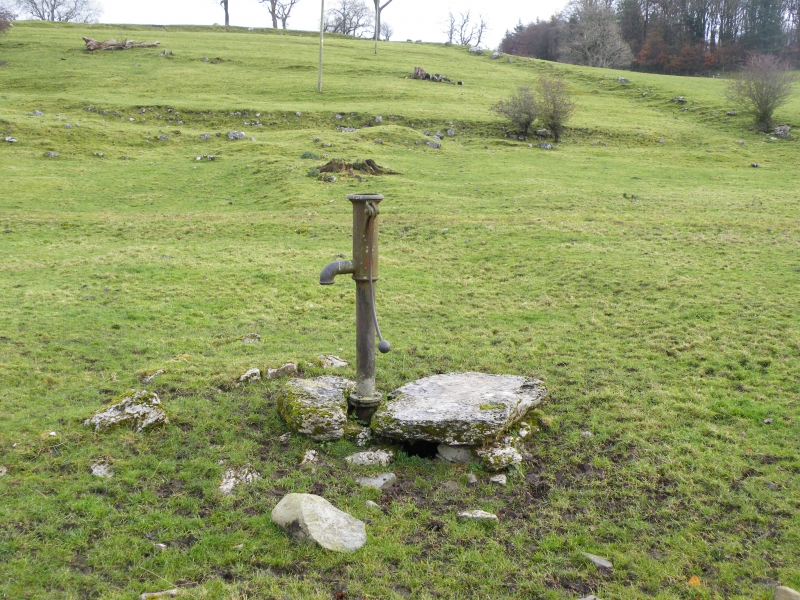 The monument, which is divided into three separate areas of protection,
includes the earthworks and buried remains of Dalton medieval village and
parts of its associated medieval open field system. It is located south of
the Burton-in-Kendal to Whittington minor road and lies either side of the
access road to Dalton Old Hall, with those parts of the monument lying to the
east of the access road occupying rising ground. Although the date of the
first settlement at Dalton is unknown the village was recorded in the
Domesday Book. Dalton is mentioned in the Lay Subsidy Rolls of 1334/36 and is
shown on an estate plan of 1690 and the 1820 tithe map. The village had been
abandoned by the time the first Ordnance Survey map was published in 1847.

The main part of Dalton medieval village is centred at approximately
SD54337590 and includes the remains of buildings, enclosures, field
boundaries, trackways and lynchets which occupy natural terraces on the
hillslope. On the lowest ground, just east of the access road to Dalton Old
Hall, an abandoned track runs almost parallel to the modern access road.
Flanking this track are the remains of two buildings separated by a yard or
garden area. To the north of these buildings are traces of stone-walled field
banks or boundaries while to the south there are the remains of another
building with an enclosure to its east, field boundaries flanking the
continuation of the track to the south, and a village iron water pump. A
curving track branches off the lower track and climbs the hillslope. On the
first terrace up the hillslope there are the remains of a two-roomed building
with a single-roomed building to the north. Field boundaries and the curving
track run up the hillslope while another boundary bank follows the western
edge of this natural terrace from the north corner of the two-roomed
building. The curving track continues upwards onto the next natural terrace.
North of the track there are the remains of a building with traces of field
boundaries, a triangular enclosure, a track and a possible building platform
to the south of the building, whilst south of the curving track three short
curved lynchets have been cut into the hillslope. On the highest natural
terrace the curving track is crossed by another track running north-south.
The curving track then forks, one branch leads to an oval-shaped enclosure
while the other branch leads to the central room of a three-roomed building.
A sub-rectangular enclosure, now crossed by a modern field boundary, lies to
the east of this building and is linked to the oval enclosure by a boundary
bank. Other earthworks including boundary banks and possible buildings or
small enclosures lie to the east. The eastern edge of the medieval village
here is defined by a prominent boundary bank. Another part of Dalton medieval
settlement lies to the west of the access road to Dalton Old Hall. It
includes the remains of a two-roomed building with traces of another partly
damaged feature, possibly a small enclosure or building, a short distance to
its north. A small three-sided enclosure lies east of the two-roomed
building. Also in this area of protection is the undisturbed eastern part of
an area of ridge and furrow which formed part of the associated medieval
communal open field system where the crops were grown. A larger part of the
associated medieval communal open field system lies to the south of the main
part of the medieval village. This includes an area of ridge and furrow
running up the hillslope and aligned east-west. Overlying much of the ridge
and furrow, and aligned in the same general direction, are a series of
well-preserved cultivation terraces interpreted as medieval strip lynchets
which would have been used for agricultural purposes.

All modern field boundaries, gates, gateposts, fences, fenceposts and
telegraph poles and their supporting cables are excluded from the scheduling
although the ground beneath all these features is included.

Medieval rural settlements in England were marked by great regional diversity
in form, size and type, and the protection of their archaeological remains
needs to take these differences into account. To do this, England has been
divided into three broad Provinces on the basis of each area's distinctive
mixture of nucleated and dispersed settlements. These can be further divided
into sub-Provinces and local regions, possessing characteristics which have
gradually evolved during the past 1500 years or more.
This monument lies in the Lancashire Lowlands sub-Province of the Northern and
Western Province, an area extending from the moorlands of the western Pennines
to the coastal plain with its villages and hamlets. The southern part of the
sub-Province supports high densities of dispersed settlements, but there are
much lower densities further north, in the Craven Lowlands, the Ribble Valley
and the areas around Morecambe Bay. In the Middle Ages the larger, lowland
settlements were supported by `core' arable lands, communally cultivated, with
enclosed fields around them. The uplands contained sheep and cattle farms and
seasonally occupied `shieling' settlements.

Extending beyond the strict bounds of Lancashire this southern sector of
Cumbria has lost the high mountains of the Lake District. Framed by a
series of strong ridges, trending north to south, the valleys of the
Duddon, Crake, Leven and Kent, result in rolling valley landscapes where
countrysides are lower, more kindly, and with more wood than further
north. These give way, often with startling speed, to the rough pastures
of silted estuaries and the marginal lands of the shallow seas. The
scatter of towns and villages is probably largely post-Norman, imposed by
conquerors over earlier levels of scattered farmsteads and hamlets. As
late as the year 685 it was possible for the monks of Lindisfarne to
receive a grant of `Cartmel, with all the Britons belonging to it',
emphasising the Celtic roots of the cultural landscapes of this region.

Medieval villages were organised agricultural communities, sited at the
centre of a parish or township, that shared resources such as arable land,
meadow and woodland. Village plans varied enormously, but when they
survive as earthworks their most distinguishing features include roads and
minor tracks, platforms on which stood houses and other buildings such as
barns, enclosed crofts and small enclosed paddocks. They frequently
included the parish church within their boundaries, and as part of the
manorial system most villages included one or more manorial centres which
may also survive as visible remains as well as below ground deposits. In
the northern and western province of England medieval villages occurred
infrequently amid areas of otherwise dispersed settlement and good
examples are therefore proportionally infrequent. Thus their
archaeological remains are one of the most important sources for
understanding rural life in the five or more centuries following the
Norman conquest.

Medieval villages were supported by a communal system of agriculture based
on large, unenclosed open arable fields. These large fields were
subdivided into strips (known as lands) which were allocated to individual
tenants. The cultivation of these strips with heavy ploughs pulled by
oxen-teams produced long, wide ridges, and where it survives the resultant
`ridge and furrow' is the most obvious physical indication of the open
field system. Individual strips or lands were laid out in groups known as
furlongs defined by terminal headlands at the plough turning points and
lateral grass banks. Furlongs were in turn grouped into large open fields.
Well-preserved ridge and furrow, especially in its original context
adjacent to village earthworks, is both an important source of information
about medieval agrarian life and a distinctive contribution to the
character of the historic landscape. It is usually now covered by the
hedges or walls of subsequent field enclosure.

Lynchets are a feature of the agricultural landscape caused by ploughing
and are found along the edges of a field or are located along the contours
within the field unit. Field boundaries, such as banks or walls, become
enlarged and overlain by hillwash material loosened by the cultivation
process, which builds up against them under the action of gravity. This
accumulation of earth is known as a positive lynchet. A corresponding
erosion from the downslope side of the boundary forms a negative lynchet.
Together the positive and negative lynchets form a terrace or a series of
terraces on a hillside and thus provide distinctive traces of medieval and
earlier agricultural activity. Medieval lynchets can be recognised in the
long rectangular fields, the so-called strip-lynchets, laid out on sloping
terrain in post-Roman and medieval times.

A substantial proportion of the earthworks and buried remains of Dalton
medieval village and its associated open field system survives well and
remains undisturbed by modern development. It is a good example of this
class of monument in the Lancashire-over-Sands and Kentdale local region
and will add greatly to our understanding of the wider settlement and
economy during the medieval period.