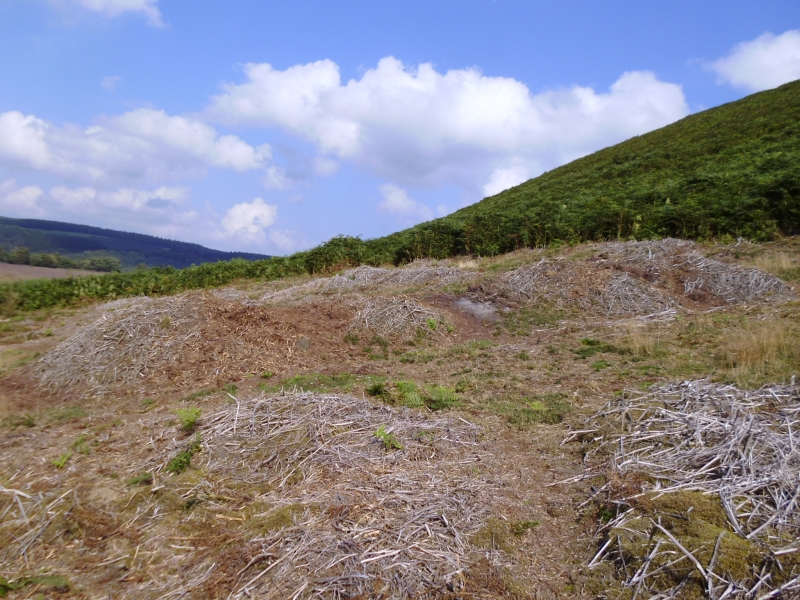 The monument includes a group of three pillow mounds, being part of a
medieval rabbit warren located on the lower flanks of West Side Brow on
the western side of Levisham Moor. The monument is divided into three
separate areas of protection, each containing one pillow mound.
Levisham Moor lies on the southern edge of the sandstone, predominantly
heather covered moor characteristic of the North York Moors. The moor
occupies the northern part of a block of land defined by the deep valleys
of Newton Dale to the west, Horcum Slack to the east, Havern Beck to the
north and Levisham Beck to the south. The eastern side of the moor is
bisected by smaller valleys known locally as griffs which divide the moor
into a series of flat-topped peninsulas with steep slopes on all but their
north western sides. The southern part of the block of land has been
enclosed and brought into agricultural use but traces of prehistoric
remains in this area are visible on aerial photographs. Today the moor is
little used but archaeological evidence indicates that this has not always
been the case. Both the prehistoric and medieval periods saw intensive use
of the land for agricultural, industrial and ritual purposes. Remains of
these activities survive today.
The pillow mounds are distributed across the lower flanks of the hill in a
well drained and sheltered location. Two of the mounds are 50m apart with
the third lying some 100m to the north. The warren is thought to be part
of the estate of the grange of Malton Priory. It is known from documentary
sources that Malton Priory held extensive tracts of land and rights on
Levisham Moor from the late 12th century onwards. Although the grange
specialised in sheep farming it also had cattle, horses and areas of
arable within the estate. As rabbit farming was a significant part of the
monastic estate economy it is likely that the grange exploited rabbits
also. The site of the grange itself is located in Dundale on the moor top,
some 500m to the east, and is protected as a separate monument. The three
pillow mounds are similar in shape and dimension each being visible as a
rectangular rounded earthen mound measuring 14m in length by 4m width and
standing 1.2m high. Each is surrounded by a ditch 1m wide and 0.5m deep.
They are all orientated south west to north east and are perpendicular to
the slope in order to obtain efficient drainage. Another pillow mound
thought to be connected to this group is located 700m to the south west
and is protected as part of a separate monument,(SM 34831).

A warren is an area of land set aside for the breeding and management of
rabbits or hares in order to provide a constant supply of fresh meat and
skins. Although the hare is an indigenous species, the tradition of warren
construction and use dates from the 12th century, following the introduction
of rabbits into England from the continent. Warrens usually contain a number
of purpose-built breeding places known as pillow mounds or rabbit buries,
which were intended to centralise the colony and make catching the animals
easier, whether using nets, ferrets or dogs. The mounds vary in design
although rarely exceeding 0.7m in height. Earlier monuments such as burial
mounds, boundary features and mottes were sometimes reused as breeding places.
The mounds are usually surrounded by ditches and contain underlying channels
or are situated on sloping ground to facilitate drainage. The interior of the
mound may also contain nesting places constructed of stone slabs or cut into
the underlying subsoil or bedrock.
A typical warren may contain between one and forty pillow mounds or rabbit
buries and occupy an area up to c.600ha. Many warrens were enclosed by a bank,
hedge or wall intended to contain and protect the stock. Other features
associated with the warren include vermin traps (usually a dead-fall mechanism
within a small tunnel), and more rarely traps for the warren stock (known in
Yorkshire as `types') which could contain the animals unharmed and allow for
selective culling. Larger warrens might include living quarters for the
warrener who kept charge of the site, sometimes surrounded by an enclosed
garden and outbuildings.
Early warrens were mostly associated with the higher levels of society;
however, they gradually spread in popularity so that by the 16th and 17th
centuries they were a common feature on most manors and estates throughout the
country. Warrens continued in use until fairly recent times, finally declining
in the face of 19th and 20th century changes in agricultural practice, and the
onset of myxomatosis. Warrens are found in all parts of England, the earliest
examples lying in the southern part of the country. Approximately 1,000 -
2,000 examples are known nationally with concentrations in upland areas, on
heathland and in coastal zones. The profits from a successfully managed warren
could, however, be considerable and many areas in lowland England were set
aside for warrens at the expense of agricultural land. Although relatively
common, warrens are important for their associations with other classes of
monument, including various forms of settlement, deer parks, field systems and
fishponds. They may also provide evidence of the economy of both secular and
ecclesiastical estates. All well preserved medieval examples are considered
worthy of protection. A sample of well-preserved sites of later date will also
merit protection.

The three medieval pillow mounds 900m north of Grove House survive well
and significant evidence of their internal structure and function will be
preserved. Their close association with the nearby grange of Malton Priory
is also important. The monument contains important evidence about
warrening and the exploitation of Levisham Moor in the medieval period.