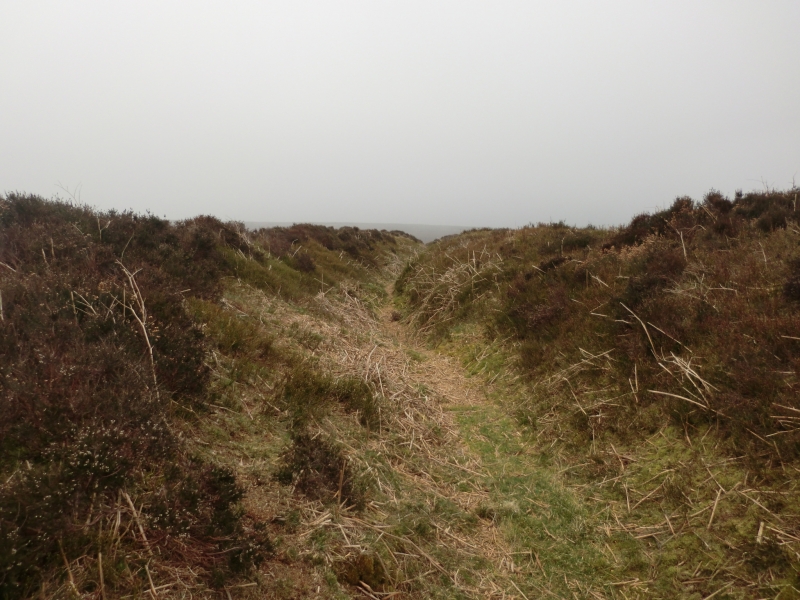 The monument includes the buried and earthwork remains of three
prehistoric burial mounds or barrows, located on the edge of West Side
Brow on the western side of Levisham Moor. The barrows are located in a
line along the edge of the slope overlooking the steep sided valley of
Newton Dale.
Levisham Moor lies on the southern edge of the sandstone, predominantly
heather covered moor characteristic of the North York Moors. The moor
occupies the northern part of a block of land defined by the deep valleys
of Newton Dale to the west, Horcum Slack to the east, Havern Beck to the
north and Levisham Beck to the south. The eastern side of the moor is
bisected by smaller valleys known locally as griffs which divide the moor
into a series of flat-topped peninsulas with steep slopes on all but their
north western sides. The southern part of the block of land has been
enclosed and brought into agricultural use but traces of prehistoric
remains in this area are visible on aerial photographs. Today the moor is
little used but archaeological evidence indicates that this has not always
been the case. Both the prehistoric and medieval periods saw intensive use
of the land for agricultural, industrial and ritual purposes. Remains of
these activities survive today.
The three barrows are located in a prominent position on the edge of the
moor in a highly visible position on the skyline. The southern barrow has
a flat-topped mound measuring 10m in diameter and 1m in height. The
central barrow lies 10m to the north east and has an earthen mound 13m in
diameter and 0.6m in height. The third barrow lies 15m to the north east
of the central barrow. It has a low stony mound 10m in diameter and 0.4m
in height. Other similar monuments elsewhere in the Moors sometimes have
an encircling ditch around the mound although this can often be infilled
and not visible as an earthwork. There are no visible surface remains of a
ditch around these mounds. All of the mounds have a shallow hollow on the
top that is the result of investigations in the past. This may have taken
place in 1851 as it is known that a number of barrows on West Side Brow
were opened in that year by Rev'd Robert Skelton.
There are at least ten other barrows distributed over the moor most of
which are in equally prominent positions. All these other barrows are the
subject of separate schedulings.

The three round barrows 130m north west of Seavy Pond survive well and,
although partly disturbed, they are relatively well-preserved. Excavation
of other round barrows in the region have shown that they demonstrate a
very wide range of burial rites from simple scatters of cremated material
to coffin inhumations and cremations contained in urns, typically dating
to the Bronze Age. A common factor is that barrows were normally used for
more than one burial and that the primary burial was frequently on or
below the original ground surface, often with secondary burials located
within the body of the mound. Most barrows include a small number of grave
goods. These are often small pottery food vessels, but stone, bone, jet
and bronze items have also occasionally been found. Excavation has also
shown that even where no encircling depression is discernible on the
modern ground surface, ditches immediately around the outside of barrows
frequently survive as infilled features, containing additional
archaeological deposits.