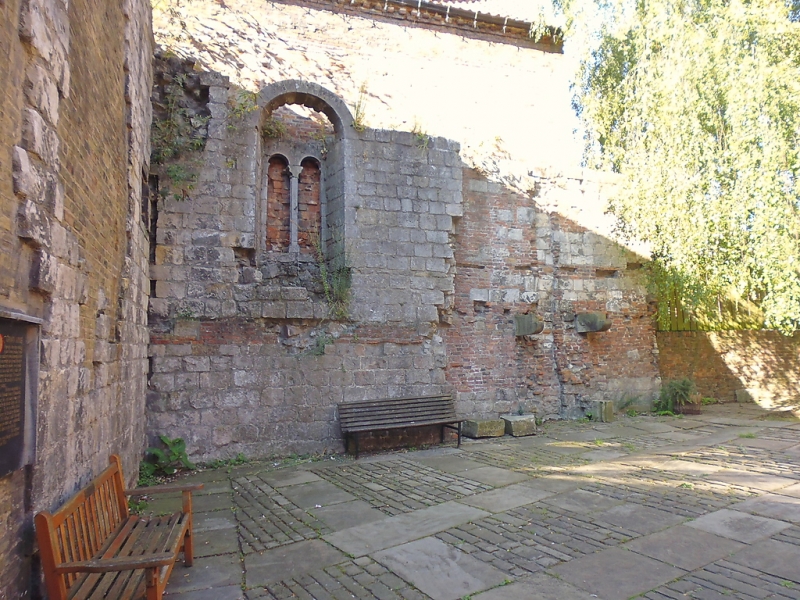 Entry Name: Medieval stone town house known as The Norman House to the rear of Nos 48 and 50 Stonegate

The monument includes standing and buried remains of a 12th century stone
house located in the centre of York approximately 70m south of the
Minster. The monument includes two adjacent stone walls which formed two
sides of the house and also the interior of the house in which below
ground remains are known to survive. The monument occupies an open paved
yard located in a closely built up area on the western side of Stonegate.
The south east wall of the monument forms the rear wall of Nos 48 and 50
Stonegate which are Listed Buildings Grade II* and is included in its
entirety including the exposed wall within the adjacent properties. The
south west wall is flush against a later building to the rear of No 46.
The house has been dated to the late 12th century on architectural
grounds. It was a prebendal house of Oswbaldwick and in 1376, of
Ampleforth. Prebendal houses were the residences of clergymen, or
prebendaries, who received the rent or tithe from a particular property
which had been set aside for the purpose of providing their income. The
adjacent 15th century house at 52 Stonegate was also part of the property
of the prebend of Ampleforth. The Norman House was one of several
prebendal houses of York Minster which were located in the same area. The
foundations of another stone prebendal house are located 25m to the south
west in the rear of No 38 Stonegate. Stonegate itself is one the earliest
streets of the medieval city, being first mentioned in documents in
1118-9. It was the principal approach to the Minster and is approximately
on the line of the Via Praetoria, one of the main roads of the Roman
fortress. The upper part of the street lay in the Liberty of St Peter and
many properties here belonged to the church or housed trades dependant on
ecclesiastical patronage such as goldsmiths and glass-painters. The Norman
House is situated in a significant enclave of similar status buildings.
Many of these properties were set back from the street and as the city
prospered the street frontage gap was filled in. Initially this was with
primitive timber buildings which were replaced by substantial timber
structures in the 15th and 16th centuries and brick buildings in the 18th
century many of which still survive today. The property to the south east
of the monument (Nos 48 and 50) is a 16th century rebuild of a 14th
century open hall with a late 15th century street frontage. The property
to the south west dates to the 18th century but may have replaced an
earlier structure.
The major part of the Norman House is thought to have been demolished by
the 18th century at the latest and the surviving remains incorporated into
new buildings. These were demolished in 1939 and the ruins of the Norman
House were discovered.
The house was a two-storey stone built building which consisted of an
undercroft with a first floor open hall above it. It was rectangular in
shape, orientated north west to south east and measured 12m in length. The
eastern side does not survive above ground but from analysis of similar
buildings elsewhere it is thought to be approximately 9m wide. The
upstanding walls are built of dressed limestone blocks. Generally, access
to two-storey open halls was through one end of the long wall to the hall
often via a porch. At the Norman House this is likely to be on the north
east long wall as there is no evidence of a door in the surviving opposite
wall and the alley currently leading on to Stonegate may respect the
traditional access route. The south western wall stands to the height of
the eaves and is 12m long. Towards the southern part of the wall there is
a complete first floor window. The window has two arched openings divided
by a cylindrical shaft, all set into a half-round rear arch. The window
was not glazed and the fittings for wooden shutters can be identified.
Further to the north there is the edge of a second window beyond which the
wall becomes thinner and the remainder of the window no longer survives.
It is likely that there was a third window further to the north which no
longer survives. At the level of the first floor there are two substantial
corbels protruding from the wall as well as an offset 0.1m deep which
would have supported a timber floor. At the northern end of this section
of wall the masonry is squared off indicating that this was an original
corner to the wall.
The south eastern wall measures 9m in length and is almost certainly the
gable end. Here the medieval masonry is more patchy and the gaps between
the stonework are filled with brickwork. On the first floor level there is
a cupboard built into the wall with grooves for shelves. The exterior of
this wall is exposed within the upper storey of the adjacent properties
(Nos 48 and 50) and the medieval masonry with later brick patching is
clearly visible. In this exposed exterior of the wall there is a fireplace
opening into the adjacent property set in to the wall at the first floor
level. This was inserted after the adjacent buildings were erected,
although the date for this is currently unknown.
The interior of the house was partly excavated in 1939. This showed that
the original ground floor was approximately 1m below the current ground
level. The excavation revealed the foundations of three central pillars
which would have supported the first floor. Also found was the lower part
of a garderobe, or latrine chute.
The standing medieval walls are Listed Grade I.
The surface of the yard, the bench, the metal flue attached to the south
east wall and the security light are excluded from the scheduling,
although the ground beneath these features is included.

Medieval town houses were a feature of towns during the medieval period
and examples survive in many towns throughout England.
This class of residence was built by and occupied by individuals of high
status.They would include clergymen, merchants, and the emerging
professional classes. Town houses would have been among the more prominent
and prestigious dwellings and thus reflect the status of their occupants.
Many were built by institutions such as the church, monastic orders and
civic authorities and relatively few by private citizens.
The earliest surviving type of town houses date to the late 11th century.
They were simple rectangular buildings but over time became more elaborate
and sophisticated with the addition of extra wings and architectural
embellishments.
The total number of surviving medieval stone town houses is not currently
known as parts or all of others are thought to be incorporated, currently
unrecognised, into existing buildings.
Medieval town houses were vernacular buildings and consequently they
exhibit a high degree of regional variation. As well as being important
buildings in the historic townscape they reflect the status and fortunes
of their inhabitants and more generally, contemporary social and
architectural trends.
Detailed investigation of the standing fabric of the Norman House to the
rear of Nos 48 and 50 Stonegate in York, together with limited excavation
of associated archaeological deposits have provided considerable insight
into the date and construction of the building. It is the earliest known
medieval house in York and the remains will provide important evidence
about both domestic life within the building and its use as a prebendal
house. In addition the monument offers important scope for the study of
the development of a significant northern city during the medieval period.

Books and journals
'York Civic Trust Annual Report' in Norman House in Stonegate, (1969), 11-12
Syme, J S, 'York Archaeological and Architectural Society Annual Report' in The Most Ancient Dwelling House In York, , Vol. Vol. V, (1951), 36-39
Other
An Inventory of the Historical Monuments in the City of York, (1981)