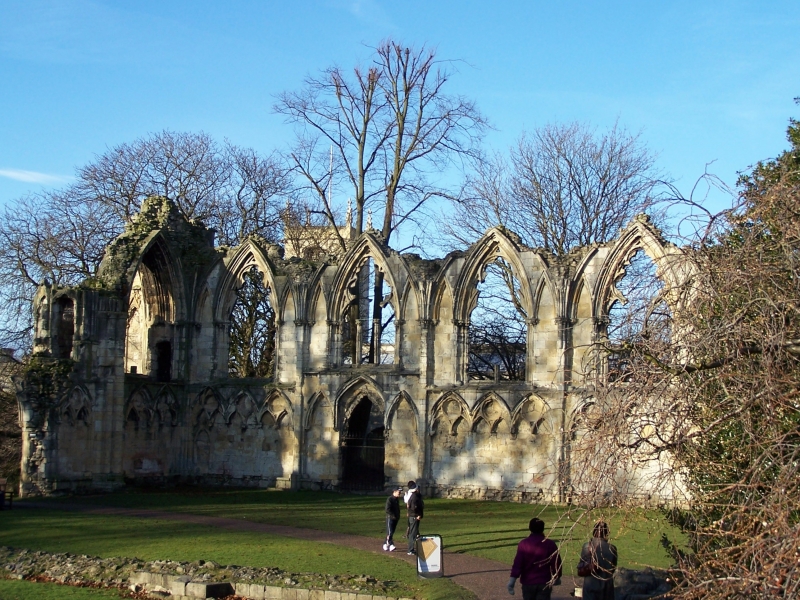 Benedictine monastery founded in 1086 which was surrendered to the Crown to form the Kings Manor in 1539, being the seat of government for northern England for the next 200 years. Developed as an early tourist attraction in the C18, the abbey formed the basis of a pioneering museum established in the early C19 by the Yorkshire Philosophical Society: managed by the Yorkshire Museums Trust since 2002 as a public park.

The monument forms the greater part of the public park (Museum Gardens) with the Yorkshire Museum to its centre. Like most of the medieval churches of York (with the exception of the Minster), St Mary's Abbey church is aligned north east-south west, apparently following the alignment of the Roman legionary fortress rather than being more conventionally east-west.

The ruins of the abbey church lie to the north west of the museum building which is built over the eastern cloistral range, with the vestibule to the chapter house and other standing remains being preserved in situ as museum displays in the basement. Almost the full footprint of the C13 abbey church is exposed, mainly as base courses; the higher standing remains being concentrated around the northern aisle of the nave. These remains include the north western pier of the central crossing (which stands up to the springing point of the vault); the eight bay northern aisle side wall standing to the crowns of its main windows; and the western front including the northern jambs to the west door and great west window above, with a lower fragment of the southern side of the west front also still standing. An arched opening through the aisle wall provides a view of the Grade II Listed table tomb of one of the founders of the museum: the artist William Etty, died 1849.

The medieval abbey originally had two main gateways into the precinct, ruins of which are included in the scheduling. The abbey's principal gateway faced away from the city and was at the west end of St Olave's Church, straddling the line of a Roman road which led to the bridge over the Ouse. The gateway arch survives spanning between fragments of the gatehouse attached to St Olave's Church and St Mary's Lodge. The lodge, circa 1470 and Listed Grade I, was built to house important guests to the abbey. Guests of lower status are thought to have been accommodated in the Hospitium which is sited next to the ruins of the abbey's secondary gate, the Watergate, which provided direct access to the river. The Hospitium (Grade II* Listed and included in the scheduling) is a large, two storey building with a stone built ground floor and timber framed upper floor, mainly dating to circa 1300, but altered by restorations in 1840 and the 1930s. In 1497 a third major gateway was constructed, known as Queen Margaret's Arch, this is close to Bootham Bar and is included in the scheduling for the precinct walls. The entrance to Museum Gardens from Museum Street is modern.

The ruins within the basement of the museum and those of the exposed northern side of the cloister show that the modern ground surface is generally higher than the medieval ground surface. However there has been extensive landscaping so that there is no clear relationship between the modern ground surface and underlying medieval surfaces. Buried remains of the southern and western cloistral buildings as well as those of the outer court (auxiliary buildings such as barns, bake and brew houses) are less well understood but are considered to survive beneath the lawns and other planting between the museum and the river. The scheduling extends beyond the abbey's riverside wall to the southern boundary of Museum Gardens. This area is expected to include buried remains of medieval and earlier waterfront structures and associated waterlogged deposits. The scheduling also extends beyond the line of the precinct wall on the eastern side to include the intramural ditch and the outer rampart of the City Wall to abut the separately scheduled area for the City Wall. The scheduling further includes the southern courtyard of what is now known as The Kings Manor. This area is not part of Museum Gardens, but includes the buried remains of the chapter house. The northern part of the Kings Manor is not included in the scheduling, nor is the northern quarter of the precinct. The use of this northern area in the medieval and early post-medieval periods is poorly understood.

Throughout Museum Gardens there are numerous fragments of medieval architectural stonework used as path and border edging or rockery stone. Although much originates from St Mary's, some is thought to have been collected from excavations of other sites across Yorkshire and beyond. Just south of the museum building there is a very good example of a prehistoric cup and ring marked rock which is also thought to have been an archaeological find from elsewhere. At least some items placed about the grounds, such as Roman stone coffins near to the Museum Street entrance, are more recent introductions.

Exclusions:
Modern road and path surfaces, and items of street and park furniture such as fencing, gates, benches and litter bins are excluded from the scheduling, although the ground beneath is included. The Hospitium and all sections of ruined medieval walling, including that attached to roofed buildings and that within the basement of the Yorkshire Museum, are included within the scheduling. The roofed buildings of the Yorkshire Museum (including the Tempest Anderson Hall), the Observatory and that part of the Kings Manor which lies within the area of the monument, are excluded from the scheduling (but remain designated via Listing), although the ground beneath remains included in the scheduling.

St Mary's Abbey is scheduled for the following principal reasons:

* Architectural: the ruins of the abbey and other structures such as gateways and the Hospitium represent very significant survivals of medieval monastic architecture;

* Historical: from its foundation in the eleventh century St Mary's Abbey remained one of the most prominent and wealthy monasteries in England until its Dissolution in 1539;

* Archaeological potential: the site retains buried remains which have the potential to increase our knowledge and understanding of the abbey, its precinct, and of other sites of this type.