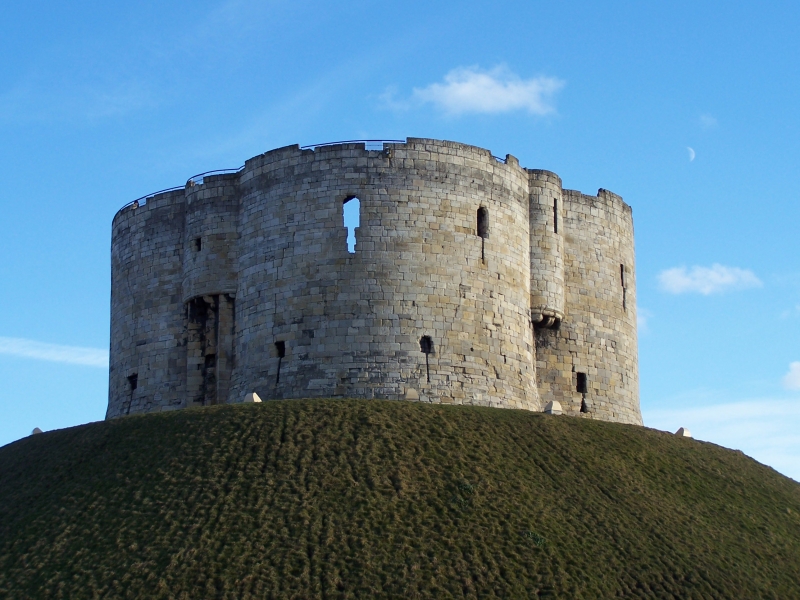 The monument includes the area occupied by York Castle and Clifford's
Tower which are situated in the heart of York, above the confluence of the
Rivers Ouse and Foss, now the Foss Navigation. The monument comprises several
elements within a single area. These include the eleventh century
motte and bailey castle, the thirteenth century tower keep castle, a Romano-
British cemetery associated with the extramural settlement of the legionary
fortress, part of Castle Yard Anglian cemetery, a length of the Roman road
that ran north-west to south-east past the south-west gate of the fortress,
the remains of part of the Roman and Anglo-Scandinavian river frontages along
the Foss, and the water defences of the medieval castle.
Nationally important remains extend outside the boundary of the scheduling
and, indeed, survive buried in areas throughout York. In the immediate
vicinity of the castle, partial excavation has revealed evidence of Roman
wharves along the Foss and it is believed that further remains of the fort-
vicus, such as taverns, shops and houses, underlie the car-park attached to
Clifford's Tower, in addition to Anglian burials indicative of post-Roman
activity along the line of the Roman road. A large area of the second bailey
to the north-east of the 11th century castle also lies outside the scheduling.
The boundary of the scheduling has been drawn to identify the core area of the
castle.
The eleventh century motte and bailey castle, built in 1086 when William the
Conqueror came north to consolidate his power over the country, was of earth
and timber construction and the original motte underlies the thirteenth
century mound of Clifford's Tower. The main bailey lay to the south-east and
extended down to the line of the River Foss. The remains of such buildings as
stables, barracks and workshops will survive throughout. A second bailey, a
large part of which extends beyond the area of the scheduling, is now known to
have existed to the north east of the motte and to include the remains of the
medieval Jewish cemetery and that of the thirteenth century Franciscan
friary. The original timber keep was the scene of the massacre of the York
Jews in 1190.
In c.1089, the Foss was dammed to create a moat around the keep and bailey.
Although infilled, the line of the moat survives beneath the surfaces of the
carpark, footpaths and access roads around the castle. Stone defences were
added round the bailey by Henry III between 1245 and 1262 when the keep was
also rebuilt in stone. The stone keep, known as Clifford's Tower, is
quatrefoil in plan and originally comprised a ground floor with two storeys
above and a forebuilding containing a chapel. The tower became ruinous in the
sixteenth century and the present forebuilding is a seventeenth century
reconstruction. Along with two towers and a length of wall to the south-east,
the keep is all that remains standing of the medieval castle, though buried
features, including those of stone buildings constructed by Henry III, are
believed to survive in the open areas of the bailey. The castle was slighted
during the Civil War and gutted in 1684. Between 1825 and 1915, it became
part of York prison. Most of the prison buildings have since been cleared,
but the former debtors' prison and female prison remain, along with the
eighteenth century Assize Court. The prison now houses the Castle Museum and
all are Grade I Listed. Clifford's Tower and the castle walls are also Grade
I Listed and have been in State care since 1916.
The protected area is bounded by the carpark and Foss Navigation to the east,
by Tower Street to the north and west, and by the castle wall to the south. A
number of features are excluded from the scheduling. These include the
buildings of the Courts and Castle Museum, the surfaces of all roads, drives,
private carparks and footpaths, bollards, all English Heritage fittings
associated with Clifford's Tower such as steps, kiosk, notices and
floodlights, all lamposts, signposts, railings and gates, and all benches and
waste-bins. The ground beneath all these exclusions is, however, included.

York Castle is a well-documented example of a tower keep castle overlying an
important urban motte and bailey castle, known to have been built specifically
to control a rebellious population in the years immediately following the
Norman Conquest. The large double baileys of the earliest earthwork castle
are unusual and emphasise the strategic importance of York in the Norman
conquest of the North. In addition to the well-preserved standing remains,
extensive buried deposits pertaining to all phases of the medieval castle
survive in the area of the baileys and include moat silts in which organic and
environmental material will survive well. Part of Castle Yard Anglian
cemetery and part of the road, cemetery and settlement area of the Romano-
British fort-vicus also lie largely undisturbed in the vicinity of the castle.
These earlier remains are known to survive well and will in themselves retain
important information on the evolution of the Roman and early medieval town.