York Minster cathedral precinct: including Bootham Bar and the length of City Walls extending round the precinct up to Monk Bar 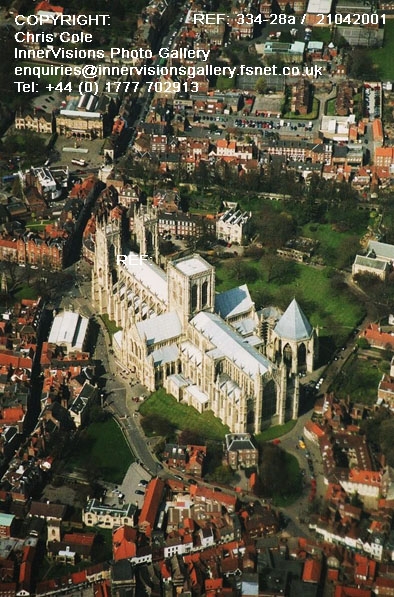 Entry Name: York Minster cathedral precinct: including Bootham Bar and the length of City Walls extending round the precinct up to Monk Bar

The present cathedral church known as York Minster is at least the fourth
major church to have stood on this site. The earliest ecclesiastical use of
the site can be traced back to the early seventh century when Paulinus
baptised King Edwin of Northumbria in a wooden oratory considered to have been
located in the vicinity of the present Minster. This event was of particular
importance as it marked the post-Roman rebirth of Christianity in northern
Britain. As a result of the adoption of Christianity by the Northumbrian
kings, a bishopric was established in York, this being one of the earliest
such foundations in post-Roman England. Pre-Conquest cathedrals are a rare and
poorly understood monument class, there having been only twenty-four known
examples. York is of particular note because its chief incumbents were
archbishops second in ecclesiastical authority only to the archbishops of
Canterbury.
Evidence for the ecclesiastical importance of York in the pre-Conquest period
is provided by contemporary references to its library, the episcopal see and,
in particular, its monastic school whose most famous pupil, Alcuin, became
Charlemagne's adviser. This importance has been maintained down to the present
day. Even during the Viking period, when York was conquered and became part of
an independent Viking kingdom that lasted from 866 to 954, there was an
unbroken succession of archbishops suggesting that the pagan Vikings quickly
converted to Christianity. After the Norman Conquest, the see rose in power
and prosperity when its Norman archbishops began a series of major building
works which culminated in the construction of the present Minster in the
thirteenth century and after. During the medieval period, the cathedral gained
considerably from its position within a thriving and wealthy town; one of the
most flourishing urban centres in England and the major town of the North. The
wealth of York was reflected in the magnificent, extensive and costly building
programme which characterised much of the cathedral precinct throughout the
medieval period. These works were funded in part by pious donations and
endowments to the church made by leading secular individuals.
With the exception of the present Minster many of the buildings and features
of the pre- and post-Conquest cathedral precinct are no longer visible.
However, extensive below-ground deposits are known to survive across the
majority of the precinct area. This is due in part to the fact that the area
has remained largely in ecclesiastical hands since earliest times. This has
limited development within the precinct; hence, below-ground archaeology
survives here in much better condition than in other more intensively
developed areas of the city. In some areas of the precinct, up to 4m of
archaeological deposits are preserved. Because of this depth of stratigraphy,
extensive remains will survive well beneath the present ground surface and
will include not only those of the pre- and post-Conquest cathedrals and their
ancillary buildings but also the Roman legionary fortress which formerly
occupied the site and the remains of the seventeenth century Ingram Mansion.
The survival of the Roman fortress is of particular note as it was one of the
earliest military foundations in the north of England and also one of the most
long-lived. It led to York being granted the status of colonia and also, in
the fourth century, to it becoming, for a time, the Imperial capital of the
Emperor Constantine. This and the degree to which its remains are preserved
make it a monument of national importance in its own right.