A Scheduled Monument in West Dyke, Redcar and Cleveland 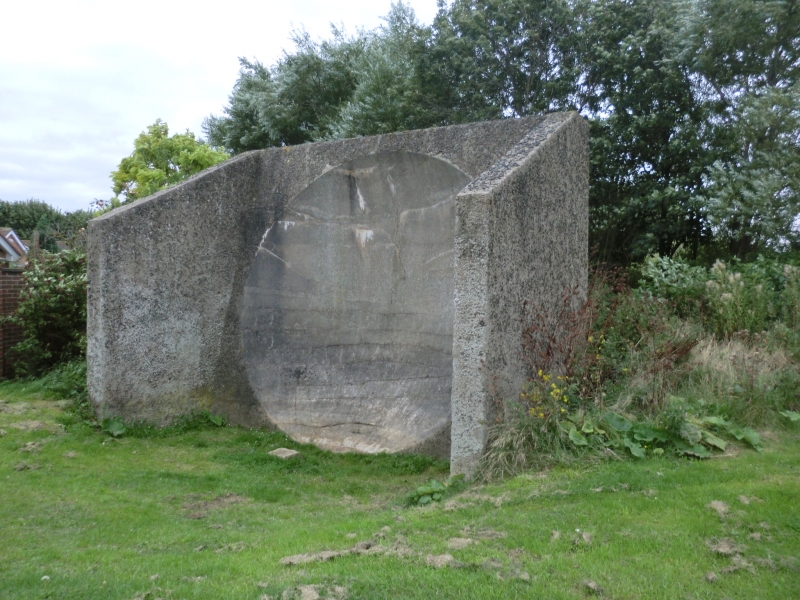 The monument includes an early 20th century military early warning device
known as a sound mirror. It is located 1.2km inland from the coast on a flat
plain on the southern side of the Tees estuary.
The mirror was part of a chain of similar acoustic devices located on the
north east coast extending from the Tyne to the Humber. They were erected to
provide early warning of potential attacks on the important industrial
complexes in the north east from ships and Zeppelins during World War I.
Little is currently known of the history and development of this particular
system and it remains something of an enigma. Successful experiments in
acoustic detection date to 1915 and it is thought that the Tees/Tyne early
warning system dates to the last two years of the war.
This mirror faces NNE and was positioned to cover the mouth of the Tees
estuary. There were at least two other mirrors known to be part of the Tees
estuary system. One was located at High Springwell 17km away on the northern
side of the estuary and was orientated to cover the north eastern approaches.
This was demolished in the 1960s. The other mirror is located overlooking
the eastern approaches to the estuary 17km to the east at Boulby and is the
subject of a separate scheduling.
The mirror is a `U'-shaped concrete built structure comprising a thick wall
with an inclined face and a shallow concave bowl shaped into its centre. On
either side of the wall are projecting flanking walls, which helped to protect
the reflector from noise interference and also supported the structure. The
reflector is a smooth bowl 4.5m in diameter, inclined approximately 11 degrees
to the vertical. The rear wall is 5.8m in length and is 4m high. The two
flanking walls are 3.9m long. At a distance of 2.5m in front of the reflector
there is the stub of a metal pipe set vertically into the ground. This was
used to support a microphone and carried wires to the headphones of the
operator who sat in a trench nearby. The location of the trench is currently
unknown. The monument also includes a margin of 5m beyond the mirror on the
northern, western and southern sides in which remains of the listening
facilities may survive.
The mirror is Listed Grade II*.
The fence surrounding the mirror is excluded from the scheduling, although the
ground beneath it is included.

The use of aircraft as offensive weapons was a significant 20th century
development in the history of warfare, and provoked new systems of strategic
air defence. Experiments in early warning systems started before 1920 with the
new possibility of attacks by airships. Early warning was initially based on
visual spotting, but acoustic detection devices were soon developed.
The principle of acoustic detection is relatively straightforward: a receiving
dish reflected the sound of distant aircraft engines onto a focal point where
it was detected by a listener or, later, by microphones. There were three main
types of acoustic device: mirror, wall and disc. Mirrors were upright concave
bowls between 3m and 4m in diameter; the walls were curved vertical structures
up to 61m in length; the disc system used horizontal concave bowls designed
for use in pairs as aircraft passed overhead to measure speed. At their most
sophisticated, the devices could identify the sounds of surface vessels or
aircraft up to 25 miles (c40km) away.
Research into acoustic early warning was carried out in a number of countries
during the early 20th century. British experiments at the Royal Flying Corps
research establishment at Farnborough tested parabolic sound reflectors of
varying shapes and curvature, and led to the first true sound mirror at
Binbury Manor in the summer of 1915, a circular disc cut directly into a low
chalk cliff. The first operational acoustic reflectors were a pair of
adjustable mirrors erected on the Kent coast in 1917, followed by a series of
concrete static mirrors established on the north east coast later in World War
One.
Further experiments were carried out after the war. This led to the building
of a complex chain of mirrors on the Kent coast around Hythe in the late
1920s. Unrealised plans were also drawn up for an ambitious scheme to be
installed around the Thames estuary.
Acoustic devices always remained susceptible to interference from extraneous
noises and adverse weather. As aircraft performance increased, the time
between detection and arrival of enemy aircraft rapidly shortened and reduced
the value of acoustic devices as an early warning system. By 1936 the
technology of radar had replaced acoustic methods as the main form of early
warning, although acoustic systems remained in use at anti-aircraft and
searchlight batteries, and as backup systems in the event of radar being
jammed.
A national survey of acoustic early warning devices has identified only around
11 sites where remains of acoustic detection survive. Field evidence of this
important aspect of the 20th defence of Britain is thus rare and all surviving
examples are considered to be of national importance.

The World War I early warning acoustic mirror 650m north west of Bridge Farm,
is only one of four known surviving examples in the north east of England. It
survives well and makes a significant contribution to the study of early 20th
century defences in England.