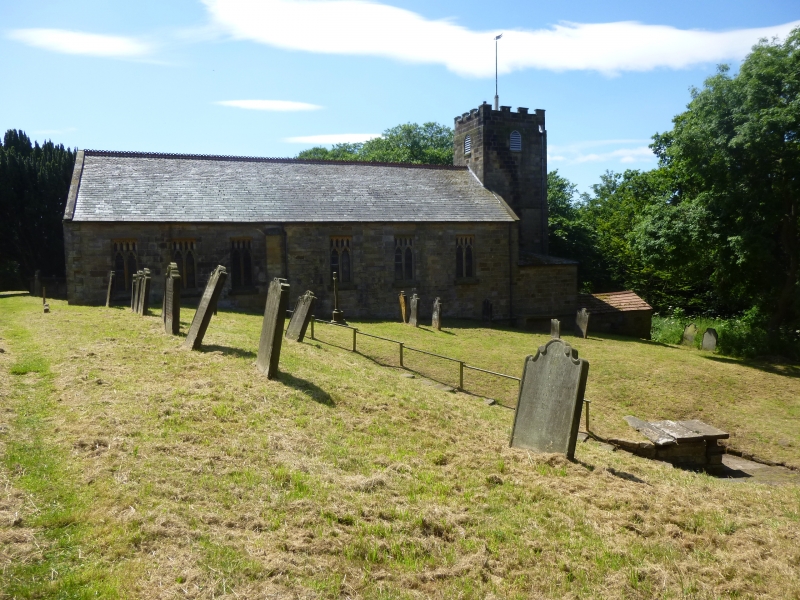 Church of England Parish: Hinderwell with Roxby and Staithes

The monument includes the remains of St Hilda's holy well, situated at the
bottom of a south facing slope in the churchyard of St Hilda's Church. The
remains, which are Listed Grade II, include a well head cover, well chamber,
basin, enclosure and steps.
The well head cover was restored in 1912 by Hilda Palmer, although parts of it
predate this restoration. It is of sandstone construction built to 1.5m high
and with two machine cut covering slabs of sandstone about 1.5m long by 0.8m
wide and one weathered sandstone covering slab 2.5m long by 1.1.m wide. The
modern cut covering slabs have been given fake tooling marks on their north
and south ends. The west (front) slab covers the basin, a sandstone trough
measuring 0.7m long, 0.45m wide and 0.2m deep. The other modern cut slab and
the older sandstone slab cover the remainder of the well chamber. There is a
stone paved area to the north, west and south of the well. This enclosure is
defined by a dry stone retaining wall and is sub-divided into three parts by
the level of the paving. The lowest section is immediately west of the opening
in the well head, and is about 1.5m square. To the south of this section,
raised on a two course wall is a seating area measuring 0.8m by 1.8m. The
other part of the paved enclosure is situated to the north of the well head,
and gives access to a flight of steps leading up a slope to the east of the
well; it measures 3m by 2.3m.
The well is named after St Hilda who founded the monastery at Whitby in 657.
The name of the well is the root of the name of the village of Hinderwell in
which it is situated. This comes from the old English Hildewella meaning
Hild's well. In the second half of the 19th century water was drawn from the
well chamber by a hand pump which is marked on the Ordnance Survey second
edition 1:2500 map of 1894.

Holy wells are water sources with specifically Christian associations. The
custom of venerating springs and wells as sacred sites is also known to have
characterised pre-Christian religions in Britain and, although Christian wells
have been identified from as early as the 6th century AD, it is clear that
some holy wells originated as earlier sacred sites. The cult of holy wells
continued throughout the medieval period. Its condemnation at the time of the
Reformation (c.1540) ended new foundations but local reverence and folklore
customs at existing holy wells often continued, in some cases to the present
day.
The holy wells sometimes functioned as sites for baptism but they were also
revered for less tangible reasons, some of which may have had origins in pre-
Christian customs, such as folklore beliefs in the healing powers of the water
and its capacity to effect a desired outcome for future events. Associated
rituals often evolved, usually requiring the donation of an object or coin to
retain the 'sympathy' of the well for the person seeking its benefits.
At their simplest, holy wells may be unelaborated natural springs with
associated religious traditions. Structural additions may include lined well
shafts or conduit heads on springs, often with a tank to gather the water at
the surface. The roofing of walled enclosures to protect the water source and
define the sacred area created well houses which may be simple, unadorned
small structures closely encompassing the water source, or larger buildings,
decorated in the prevailing architectural style and facilitating access with
features such as steps to the water source and open areas with stone benching
where visitors might shelter. At their most elaborate, chapels, and sometimes
churches, may have been built over the well or adjacent well house. The number
of holy wells is not known but estimates suggest at least 600 nationally. They
provide important information on the nature of religious beliefs and practices
and on the relationship between religion and the landscape during the medieval
period.

Despite the reconstruction of the well head cover in 1912, the earlier
upstanding structures and deposits preserved beneath the present ground
surface will provide significant information on the form and use of the holy
well.

Other
Photo from church leaflet on well, The Old Pump Well, Hinderwell,