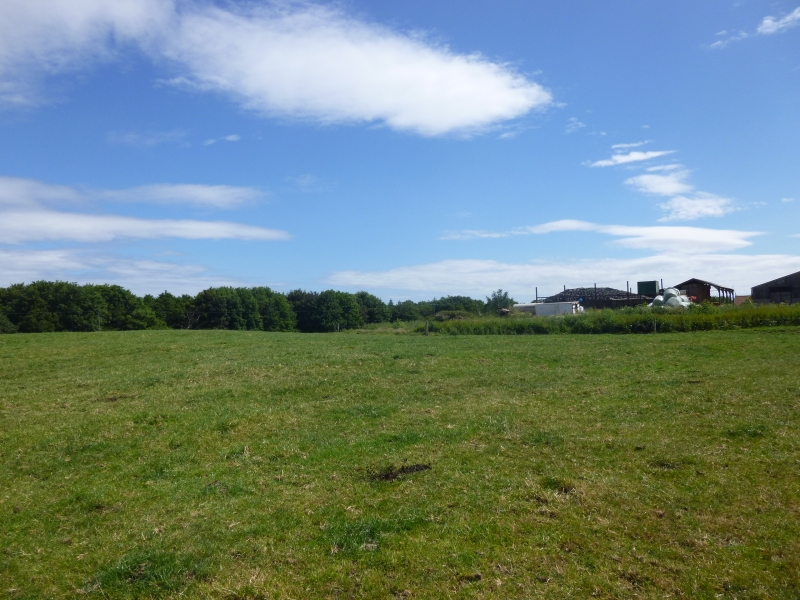 The monument includes part of the earthwork and buried remains of Newton
Mulgrave medieval village. The surviving earthworks are situated around the
present hamlet of Newton Mulgrave and are split into two separate areas, one
to the west of Village Farm and the other to the east of the hamlet. The
western area includes earthworks up to 0.5m high, which preserve the division
of land units within this area. The area also includes the building platform
of Newton Hall, which is an irregular rectangle of 40m long by 25m wide,
defined by a 0.5m high bank. The eastern area includes a large building
platform 80m long by 40m wide, which is 0.5m higher than the immediately
surrounding field. On a tithe map of 1833 this platform has a large building
along its southern edge 25m long by 10m wide. Its western edge is defined by a
ditch, which survives as a 0.1m deep depression. To the north of the platform
is a trackway 4m wide and 0.1m deep.
Newton Mulgrave was recorded in the Domesday Book of 1086 as containing three
carucates of land (approximately 150ha), which belonged to Borrowby. A chapel
is believed to have existed here since the 12th century; although no evidence
of it exists above ground, it will be preserved beneath the present surface.
The silage clamp, the surface of the farmyard and of the metalled road and
fence posts are excluded from the scheduling, although the ground beneath them
is included.

Medieval rural settlements in England were marked by great regional diversity
in form, size and type, and the protection of their archaeological remains
needs to take these differences into account. To do this, England has been
divided into three broad Provinces on the basis of each area's distinctive
mixture of nucleated and dispersed settlements. These can be further divided
into sub-Provinces and local regions, possessing characteristics which have
gradually evolved during the past 1500 years or more.
This monument lies in the East Yorkshire sub-Province of the Central Province,
an area characterised by marked local terrain variations: from the North York
Moors, to the Tabular Hills and Howardian Hills, to the Vale of Pickering and
the chalk Wolds, to the Hull Valley and the silt lands of the Humber and
Holderness. The sub-Province has the relatively low density of dispersed
settlements which marks the Central Province, but this uniformity masks strong
settlement contrasts. Some regions were typified by low density dispersed
settlement in the Middle Ages, whereas others have achieved a similar pattern
through extensive depopulation of medieval villages.
The North East Coast local region is for the greater part a sparsely settled
rural area, but it has higher concentrations of settlement around creeks and
havens, linked to fishing and to the extraction and processing of alum and
jet.

Medieval villages were organised agricultural communities, sited at the centre
of a parish or township, that shared resources such as arable land, meadow and
woodland. Village plans varied enormously, but when they survive as earthworks
their most distinguishing features include roads and minor tracks, platforms
on which stood houses and other buildings such as barns, enclosed crofts and
small enclosed paddocks. They frequently included the parish church within
their boundaries, and as part of the manorial system most villages included
one or more manorial centres which may also survive as visible remains, as
well as below ground deposits. In the Central Province of England, villages
were the most distinctive aspect of medieval life, and their archaeological
remains are one of the most important sources of understanding about rural
life in the five or more centuries following the Norman Conquest.
Despite disturbance from recent improvements to the pasture, the remains of
the medieval village surrounding the present hamlet of Newton Mulgrave survive
as visible earthworks. Important information about the form and activities of
the settlement will have been preserved in deposits beneath the present ground
surface. Due to the waterlogged nature of the soil in this area, below ground
preservation will be good.