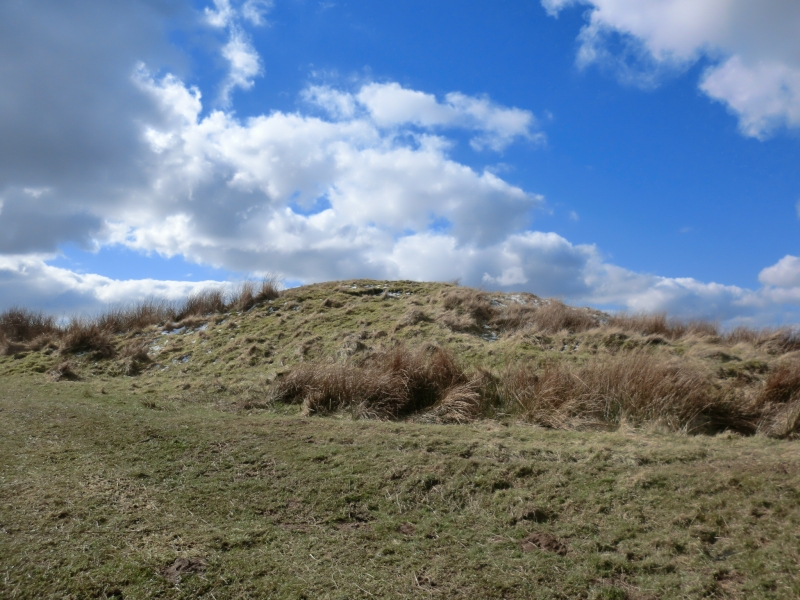 The monument includes a long barrow situated in a prominent position at the
top of a north east and north west facing slope on the edge of the North York
Moors.
The barrow has an earth and stone mound which is ovoid in shape, with its long
axis oriented ESE to WNW. The mound measures 36m in length and is 13m wide at
the west end and 20m wide at the east end. It stands up to 2.6m high at the
east end, with the top sloping down towards the west. On the top of the mound
and on the north side there are a number of small hollows caused by the
robbing of stone from the fabric of the mound. Originally the mound would have
been narrower and trapezoidal in shape with flanking quarry ditches up to 3m
wide along its north and south edges. However, over the years erosion and
stone robbing have resulted in a more rounded shape and soil has slipped from
the mound, increasing its width and burying the quarry ditches which are no
longer visible as earthworks. There would also have been a forecourt area up
to 10m wide in front of the east end of the mound where rituals connected with
the use of the barrow would have taken place. There is nothing of this visible
now, but archaeological remains will survive as subsoil features. The long
barrow lies in an area rich in prehistoric remains, including further burial
monuments.
A public bridleway runs in a north to south direction to the east of the
barrow mound and passes immediately adjacent to it at the north east corner.
All field boundary walls and a concrete water tank set into the ground to the
north of the west end of the barrow are excluded from the scheduling, although
the ground beneath these features is included.

Despite limited disturbance, the long barrow 250m east of Birchdale House
survives well. Significant information about the original form of the
monument, the burials placed within it and the rituals associated with them
will be preserved. Evidence for earlier land use and the contemporary
environment will also survive beneath the barrow mound and within the buried
quarry ditches. It is one of only a few monuments dating to the Neolithic
period to be found in the North York Moors surviving as an earthwork.
The long barrow is situated within an area which includes monuments dating
from the Bronze and Iron Ages. Associated groups of monuments such as these
demonstrate a continuity of occupation throughout the prehistoric period and
offer important scope for the study of the distribution and development of
prehistoric activity across the landscape.