Round barrow and 20th century Royal Observer Corps post on Beacon Hill, known as the site of Hinderwell Beacon 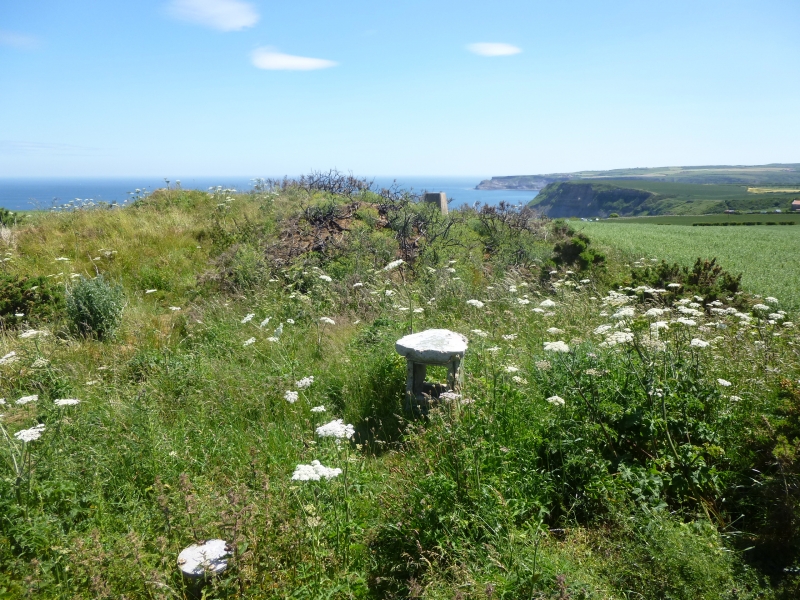 Church of England Parish: Hinderwell with Roxby and Staithes

The monument includes a round barrow situated in a prominent hilltop position
above the cliffs at Port Mulgrave, and a 20th century Royal Observer Corps
(ROC) post.
The barrow has an earth and stone mound standing up to 4m high. It has a
maximum diameter of 15m, although this has been reduced east-west by
ploughing. The barrow was originally surrounded by a kerb of stones which
defined the barrow and supported the mound. However, over the years many of
these stones have been taken away or buried by soil slipping off the mound,
although two are still visible on the south side and one on the north west.
The barrow was partly excavated in 1920. As well as seven cremation burials,
about 300 worked stones were recovered from the matrix of the mound, many of
them decorated with cup marks. The mound is disturbed on the north west side
by the infilling of the past excavations, and in the centre by two sub-
rectangular hollows caused by the removal of a small building. On the south
west side there is an Ordnance Survey triangulation point. The barrow was
originally one of three, two of which have been destroyed by ploughing. Place
name evidence indicates that the barrow was reused as a beacon in the medieval
or early post-medieval periods.
The ROC post lies immediately adjacent to the barrow mound on the north west
side. It is an underground nuclear monitoring post which is visible as a low
earthen mound measuring 10m north west to south east by 7m north east to south
west and standing up to 0.7m high. It has an entrance hatch at the north west
end and an air vent at the south east end, both standing above the surface of
the mound. The post was originally established in 1936 but the present
structure was constructed in 1960 to replace a ground level Orlit post built
in 1952. The post was closed in 1991 following the end of the Cold War. A
fence line runs in a north east to south west direction to the north west of
the ROC post. All fence posts are excluded from the scheduling, although the
ground beneath them is included.

Despite disturbance, significant information about the original form of the
round barrow on Beacon Hill and the burials placed within it will be
preserved. Evidence for earlier land use will also survive beneath the barrow
mound. It is the only one of the original group of three to survive as a
visible monument.
Prehistoric rock art is found on natural rock outcrops in many areas of upland
Britain. It is especially common in the north of England in Northumberland,
Durham and North and West Yorkshire. The most common form of decoration is the
'cup and ring' marking, where expanses of small cup like hollows are pecked
into the surface of the rock. These cups may be surrounded by one or more
'rings'. Single pecked lines extending from the cup through the rings may also
exist, providing the design with a 'tail'. Pecked lines or grooves can also
exist in isolation from cup and ring decoration. Other shapes and patterns
also occur, but are less frequent. Carvings may occur singly, in small groups,
or may cover extensive areas of rock surface. They date to the Late Neolithic
and Bronze Age periods (2800-c.500 BC) and provide one of our most important
insights into prehistoric 'art'. The exact meaning of the designs remains
unknown, but they may be interpreted as sacred or religious symbols.
Frequently they are found close to contemporary burial monuments and the
symbols are also found on portable stones placed directly next to burials
or incorporated into burial mounds. Around 800 examples of prehistoric rock
art have been recorded in England. This is unlikely to be a realistic
reflection of the number carved in prehistory. Many will have been overgrown
or destroyed in activities such as quarrying. All positively identified
prehistoric rock art sites exhibiting a significant group of designs normally
will be identified as nationally important.
The barrow on Beacon Hill is one of several which include decorated cup-marked
stones, distributed along the northern and eastern periphery of the North York
Moors. As such it can be dated to the last part of the Neolithic period or
Early Bronze Age, earlier than many similar barrows found on the central
moorland. It is notable for the very large number of marked stones recorded
from the barrow mound.
Royal Observer Corps (ROC) posts are a network of military sites largely
established during the second World War for aircraft identification, tracking
and reporting. During the Cold War in the early 1950s, the network of ROC
posts was reorganised into territorially based groups within which there were
clusters of three or four posts situated between six and ten miles apart.
These provided coordinated reports on visual observation of low flying
aircraft. Two new structure types were introduced in 1952, known as Orlit
posts. Each consisted of a rectangular box made of pre-cast concrete measuring
3.1m by 2.03m, with a removable cover to provide protection when not in use.
Some were constructed at ground level and others were elevated 1.83m above the
ground on four pre-cast concrete legs. Ministry of Defence records indicate
that 413 Orlit posts were constructed in England. In the mid-1950s it was
decided that the ROC posts should also have a role in monitoring nuclear
fallout and a new structure was introduced for this purpose. These were
underground installations consisting of a rectangular chamber constructed from
reinforced concrete, measuring internally 5.8m by 2.6m and 2.3m high. Inside,
these posts included accommodation for four men who might be required to
remain within for up to a week. Entry was by means of a ladder descending from
an above ground hatch positioned at one end of the structure. At the opposite
end to the entry hatch each structure had an air vent which also extended
above ground level. Between 1957 and 1965, 985 underground posts were built in
England, some of them replacing Orlit posts and earlier structures, others
built alongside them. In 1965 the role of the ROC in visual observation and
aircraft reporting ended and all above ground posts were closed. The remaining
underground nuclear monitoring posts were closed in 1991 after the end of the
Cold War.
This ROC post on Beacon Hill has not been disturbed since it was closed in
1991 and is an excellently preserved example of an important Cold War
defensive feature. The successive uses of the monument as barrow, beacon and
bunker illustrate the changing importance of this prominent coastal location
for ritual and defensive purposes over a period of about 4000 years.