A Scheduled Monument in Brixham, Torbay 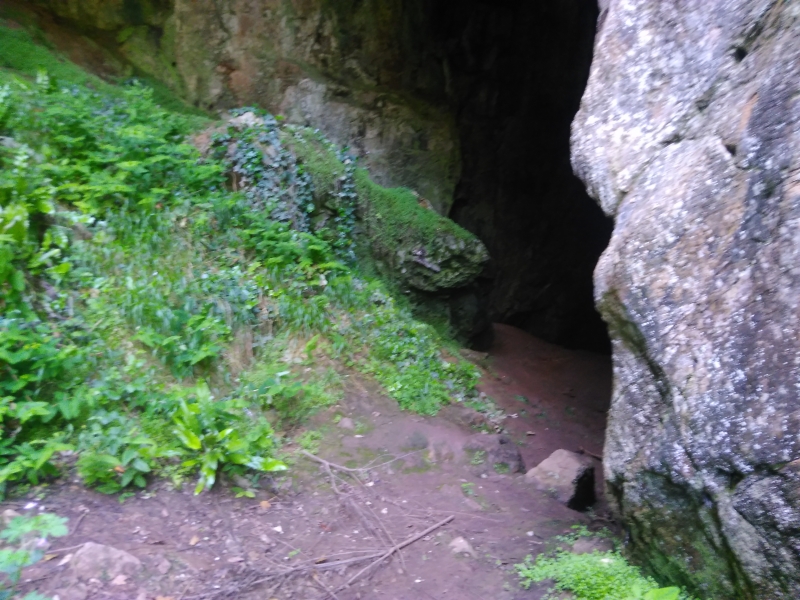 The monument, known as the Ashhole Cavern, includes a main cave chamber,
orientated east-west, and associated fissures and smaller chambers which
penetrate into the local Devonian Limestone. The cavern, which was utilised as
a rock shelter in the Bronze Age, is located 100m from the coast about halfway
between Brixham and Berry Head on the southern crescent of Torbay.
The entrance to the cavern lies at the base of a naturally formed sinkhole at
the extreme east of the main cave chamber where deposits containing Bronze
Age pottery have been excavated just within the entrance. A forced breach of
19th century date within a quarry face on the northern side of the cavern,
about halfway down its length, created a large artificial entry into the
chamber wall which has subsequently provided the more usual route into the
system.
The main chamber of the cavern has been mapped by the Devon Karst Research
Society with dimensions of about 40m east-west by 22m north-south at its
widest point. The height of the cavern at its entrance is about 1.5m but this
increases considerably to a height of over 12m further back into the body of
the cavern, the fissures extend into the rock on the western and southern
sides of the main chamber. Extending westwards and downwards into the chamber
from the cavern entrance is a thick, concreted talus of light brown coloured
cave earth. This cave earth, where excavated adjacent to the entrance by Lyte
in first half of the 19th century, was reported to have contained pottery,
bronze metalwork, and human remains above a stalagmite floor which in turn
sealed animal bone deposits including those of now extinct species.
Further quantities of pottery, flint, and a Roman coin were removed from the
cave earth between 1965 and 1967. This material was reported on by ApSimon who
found that the majority of the recovered pottery originated from the Bronze
Age and could be assigned to the regional Trevisker style of pottery named
after the site in Cornwall where it has been most coherently studied and where
it was found to date from about 1750 BC to 1000 BC; Neolithic, Iron Age, and
Roman occupation of the cavern was also attested. Burials within the cavern
which had been reported in the earlier excavations were considered by
ApSimon to be most likely Romano-British in date.

Caves and rock shelters provide some of the earliest evidence of human
activity. The sites, all natural topographic features, occur mainly in hard
limestone in the north and west of the country, although examples also exist
in the softer rocks of south east England. Evidence for human occupation is
often located near the cave entrances, close to the rock walls or on the
exterior platforms. The interiors sometimes served as special areas for
disposal and storage or where places where material naturally accumulated from
the outside. Because of the special conditions of deposition and preservation,
organic and other fragile materials often survive well and in stratigraphic
association. Caves and rock shelters are therefore of major importance in
determining how such naturally formed sites were employed by man in
prehistoric periods and later. Due to their comparative rarity and their
longevity as a monument type, all examples with good survival of deposits are
considered to be nationally important.

Despite a 19th century breach of its northern cave wall and some loss of the
cave earth to excavation, Ashhole Cavern, which, in addition to the main
chamber, includes a number of associated fissures and smaller chambers, will
preserve intact deposits of cave earth dating from the Pleistocene era above
which are archaeological cave earth deposits of the Neolithic to the Romano-
British period, and it is has been demonstrated by excavation to be
particularly rich in Bronze Age pottery of the regional Trevisker type. The
cavern will retain archaeological and environmental information which will be
informative about the lives of those who utilised it for shelter, burial, or
other purposes over a broad period from the prehistoric through to the Roman
periods, and the changing landscape in which all of these peoples lived.