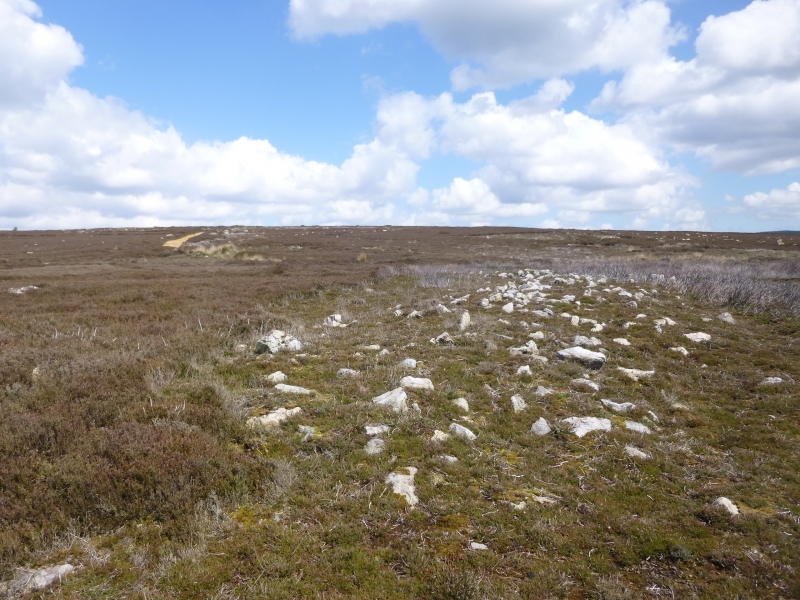 The monument includes buried and earthwork remains of a prehistoric burial
monument on Askew Rigg, 880m south east of Hartoft Bridge. It is marked as an
enclosure by the Ordnance Survey and lies 950m south west of Hartoft Bridge,
centred 24m east of the shooting track which runs down the rigg.
The ring cairn is sited on a slight natural rise on the top of the gently
sloping spine of the rigg, overlooking the River Seven to the east, the head
of Grain Beck to the west and another more prominent rise on Askew Rigg to the
south. It is not intervisible with Abraham's Hut round cairn to the north. The
ring cairn is formed by an earth and stone bank 3.5m to 4m wide and typically
0.3m high, with individual stones typically no larger than 0.4m across, mostly
smaller. This bank forms a ring 21m in diameter measured between the centres
of the bank, with a 24m external diameter. In three places around the circuit,
to the west, NNW and south east, the bank broadens inwards with 2m by 2m
spurs. There is also a 2m wide gap in the east side of the ring, which has
been interpreted as an entrance, and a lowering of the bank on the north and
south sides caused by an abandoned footpath. The interior of the ring cairn is
uneven except for an 8m by 2m, 0.1m deep hollow area extending WSW from the
south side of the centre of the ring. This is identified as the excavation
trench dug by R Hayes in 1962, who uncovered a deposit of oak charcoal and
seeds within a pit 1.2m by 0.6m by 0.75m. The small cairn of stones at the
centre of the ring cairn is considered to be a spoil heap from this
excavation. Although there is no obvious ditch visible around the ring cairn,
a 3m margin surrounding the ring cairn is included, as a number of other
examples on the North York Moors have been found to be encircled by a ditch.
These ditches can survive as infilled features, rather than as earthworks, and
will then retain additional archaeological deposits aiding our understanding
of the changing local environment.

The ring cairn on Askew Rigg is a well preserved example of this rare form of
monument, the small sample excavation by Hayes adding to our interpretation of
the site. It is one of a small number of ring cairns on the North York
Moors.