Cropton Hall Garth: a motte and bailey castle including later medieval manor house, a medieval trackway and a pond 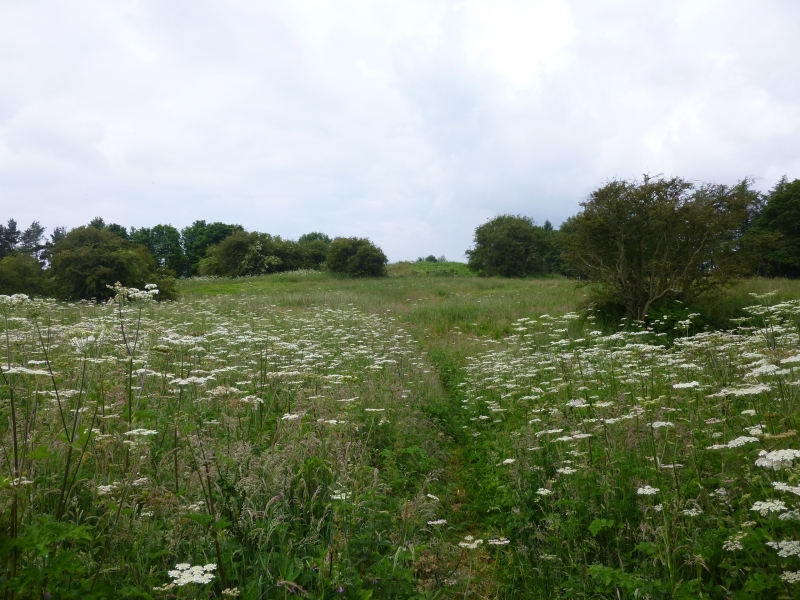 The monument includes the Norman motte and bailey castle containing a later
medieval manor house complex which is situated immediately to the west of St
Gregory's church, at the top of the steep scarp known as Hallgarth Hill.
The motte lies in the western corner of the bailey, close to the brow of the
hill; it comprises a mound 45m in diameter at the base and rising 6.5m to a
flat top which is up to 18m across. At the centre of the mound there is a
roughly circular depression 2m deep by 5m across and, although it has been
suggested that this is the result of an unrecorded excavation by 19th century
antiquarians, this may well be the remains of a collapsed undercroft of the
wooden tower which originally stood on the motte. A ditch originally encircled
the motte but has been partially infilled by material gradually eroded from
the mound and also deliberate levelling in the area of the medieval manor
house to the east of the motte. The bailey is roughly triangular, measuring
125m east-west by 105m north-south and occupying the whole of a natural
plateau with the steep scarp of the hill on the north-west and south sides. An
earthen bank up to 1m high runs along the eastern side and at the edge of the
scarp on the north-west side as far as the western side of the motte; in
places the bank has been partially altered and revetted by a modern dry stone
wall. On the southern side the bank is no longer visible as an earthwork as it
was levelled to make way for the later manor house complex. An outer ditch, 8m
wide by 1.2m deep, is visible to the north of the bailey and is thought to
have continued down the eastern side, although here it has been altered by the
construction of a modern Forestry Commission track, a modern causeway at the
site entrance and a circular pond. To the west the bailey defences were
strengthened by artificially altering the natural scarp of the hill; 12m
beyond the edge of the bailey a terrace was constructed to increase the
steepness of the slope above and there are slight indications of an outer bank
on the outer edge of the terrace. The entrance to the castle is thought to
have been located on the eastern side where a slight hollow way leads into the
bailey from the modern causeway; this also lines up with a footpath to the
north of the churchyard.
Building foundations, surviving as turf-covered stone wall footings, low banks
and platforms, are visible in the bailey; most belong to a manor house founded
in the 13th century, although some structures may originally have been part of
the castle. The main building complex, which lies to the east of the motte,
comprises a rectangular range 60m long by 18m wide, with adjacent outbuildings
and walled enclosures. One such enclosure, measuring 80m east-west by 75m
north-south lies to the south-east of the manor house and spans the earlier
bailey defences to enclose a triangle of sloping land to the south; this
enclosure continued in use after the demise of the manor house and is depicted
on the 1848/9 Ordnance Survey map. To the east of this enclosure the land
falls sharply towards Church Lane, a deeply eroded hollow way, and a number of
old inter-twined trackways rise up this slope, joining to form a single
trackway. This trackway dates to the medieval period and once ran along the
eastern bailey ditch before continuing north for 650m towards Lady Keld
Spring, although it has now been altered by the modern Forestry Commission
trackway.
A circular pond, which lies to the east of the bailey and north of the modern
causeway, is relatively modern and is not depicted on the 1848/9 Ordnance
Survey map.
Cropton is recorded as a royal manor in Domesday but the castle was probably
erected by Robert de Stuteville (nicknamed 'Frontdebos') who received the
manor from William Rufus. In the 13th century, the manor passed by marriage to
Hugh Wake whose grandson John, Lord Wake, built the manor house between
1290-5.
All fences are excluded from the scheduling, although the ground beneath is
included.

The motte and bailey at Cropton includes remains of a medieval manor house
which superseded the castle as the residence of the local lord and, although
the defences of the bailey have been slightly altered to accommodate the manor
house and by modern forestry, the castle is well-preserved and is known to
contain well-preserved foundations of medieval buildings. Because of the close
association of the motte and bailey with the later manor house, Cropton Hall
Garth retains important evidence for the study of the continued development of
the feudal system from its imposition after the Norman Conquest until the end
of the Middle Ages.