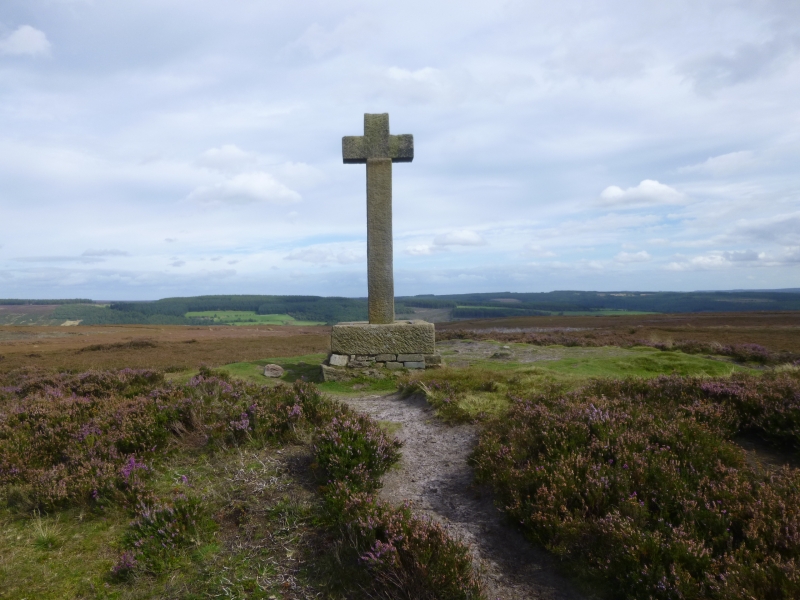 The monument includes buried and earthwork remains of a prehistoric burial
mound, topped by a modern replacement of a medieval wayside cross,
approximately 1km SSE of the top of Rosedale Chimney Bank.
The round barrow is prominently sited on top of a natural rise to the east of
Ana Moss. It is intervisible with the four barrows known as the Three Howes to
the north west, but not with Abraham's Hut round cairn to the south east. The
barrow is mainly of earthen construction with some visible stones up to 0.4m
across, is 18m in diameter and 1.2m high. On the south side of its broad
summit there is a slight hollow up to 0.4m deep, with the cross standing on
the northern side. Although there is no obvious ditch visible around the
barrow, a 3m margin surrounding the mound is included to allow for its likely
survival. This is because excavations of other examples in the region have
shown that, even where no encircling depression is discernible on the modern
ground surface, ditches immediately around the outside of the mound frequently
survive as infilled features, containing additional archaeological deposits.
The wayside cross marks a medieval route way across the moor between
Lastingham and the site of Rosedale Priory. A deeply incised hollow way skirts
the western side of the barrow heading towards the modern village of Rosedale
Abbey. The current cross, which at one time was known as Ain or One Howe
Cross, but now more generally as Ana Cross, dates to 1949 when the original
medieval cross was removed to the crypt of Lastingham Church. It was repaired
in the summer of 1998 after its collapse in the winter of 1995. The cross
stands approximately 3m high and is set into a pair of equally sized socket
stones 0.35m thick which are joined by two iron ties to form a base 1.25m by
2.75m. The foot of this base is some 0.3m above the surrounding ground surface
and has been underpinned with cemented stonework. The cross is Listed Grade
II.

Excavations of round barrows in the region have shown that they demonstrate a
wide range of burial rites from simple scatters of cremated material to coffin
inhumations and cremations contained in urns, typically dating to the Bronze
Age. A common factor is that barrows were normally used for more than one
burial and that the primary burial was frequently on or below the original
ground surface, often with secondary burials located within the body of the
mound.
Wayside crosses are one of several types of Christian cross erected during the
medieval period, typically acting as way markers in otherwise unmarked terrain
for routes for parishioners from outlying settlements, for funeral
processions, long distance pilgrimage routes or merely the path linking
ordinary settlements. Over 350 wayside crosses are known nationally,
concentrated in the south west in Cornwall and on Dartmoor, with a small group
found on the North Yorkshire Moors. Wayside crosses contribute significantly
to our understanding of medieval religious customs, and to our knowledge of
medieval route ways and settlement patterns.
Ana Cross round barrow is relatively well preserved. Its interest is
heightened by the cross, a modern replacement of a medieval wayside cross.