A Scheduled Monument in Acklam, Middlesbrough 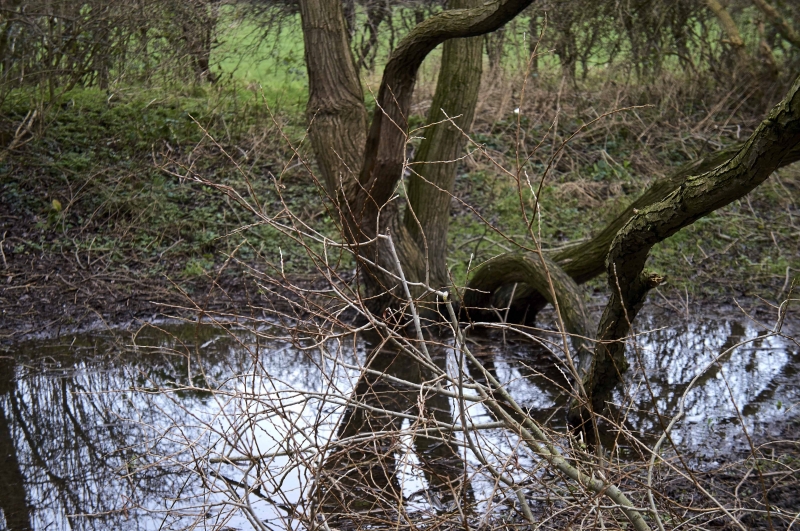 The monument includes the remains of a fishpond of medieval date situated to
the north west of the core of the medieval manor of Acklam. The manor was
mentioned in the Domesday survey of 1086. In addition to the fishpond, it is
known to have comprised a village, a moated site and a church. On the tithe
map of 1849 the area containing the fishpond is called `long ponds.'
The fishpond is visible as a linear ditch 270m long and a maximum of 18m wide;
the profile of the ditch is U-shaped and is a maximum of 1.5m below the level
of the ground. Given its extended length, the ditch is interpreted as a series
of at least two ponds, although this cannot be recognized through dense
vegetation and tree growth.
The lamp posts situated along the eastern edge of the monument are excluded
from the scheduling, although the ground beneath these features is included.

A fishpond is an artificially created pool of slow moving freshwater
constructed for the purpose of cultivating, breeding and storing fish to
provide a constant and sustainable supply of food. They may be dug into the
ground, embanked above ground level, or formed by placing a dam across a
narrow valley. Groups of up to twelve ponds variously arranged in a single
line or in a cluster and joined by leats have been recorded. The ponds may be
of the same size or of several different sizes with each pond being stocked
with different species or ages of fish. The size of the pond was related to
function, with large ponds thought to have had a storage capability whilst
smaller, shallower ponds were used for fish cultivation and breeding.
Fishponds were maintained by a water management system which included inlet
and outlet channels carrying water from a river or stream, a series of sluices
set into the bottom of the dam and along the channels and leats, and an
overflow leat which controlled fluctuations in water flow and prevented
flooding.
Buildings for use by fishermen or for the storage of equipment, and islands
possibly used for fishing, wildfowl management or as shallow spawning areas,
are also recorded.
The tradition of constructing and using fishponds in England began during the
medieval period and peaked in the 12th century. They were largely built by the
wealthy sectors of society with monastic institutions and royal residences
often having large and complex fishponds. The difficulties of obtaining fresh
meat in the winter and the value placed on fish as a food source and for
status may have been factors which favoured the development of fishponds and
which made them so valuable. The practice of constructing fishponds declined
after the Dissolution of the Monasteries in the 16th century although in some
areas it continued into the 17th century. Most fishponds fell out of use
during the post-medieval period although some were re-used as ornamental
features in 19th and early 20th century landscape parks or gardens, or as
watercress beds.
Documentary sources provide a wealth of information about the way fishponds
were stocked and managed. The main species of fish kept were eel, tench,
pickerel, bream, perch, and roach. Large quantities of fish could be supplied
at a time. Once a year, probably in the spring, ponds were drained and
cleared.
Fishponds are widely scattered throughout England and extend into Scotland and
Wales. The majority are found in central, eastern and southern parts and in
areas with heavy clay soils. Fewer fishponds are found in coastal areas and
parts of the country rich in natural lakes and streams where other sources of
fresh fish were available. Although 17th century manuals suggest that areas of
waste ground were suitable for fishponds, in practice it appears that most
fishponds were located close to villages, manors or monasteries or within
parks so that a watch could be kept on them to prevent poaching. Although
approximately 2000 examples are recorded nationally, this is thought to be
only a small proportion of those in existence in medieval times. Despite being
relatively common, fishponds are important for their associations with other
classes of medieval monument and in providing evidence of site economy.

Despite the fact it is now dry, the fishpond east of Acklam Park is reasonably
well preserved and retains evidence relating to the economy of the medieval
manor. Its association with the buried remains of further manorial features
immediately to the south enhances the importance of the monument. The fishpond
also forms part of a major recreational amenity within the residential area of
Acklam.