A Scheduled Monument in Trimdon, Middlesbrough 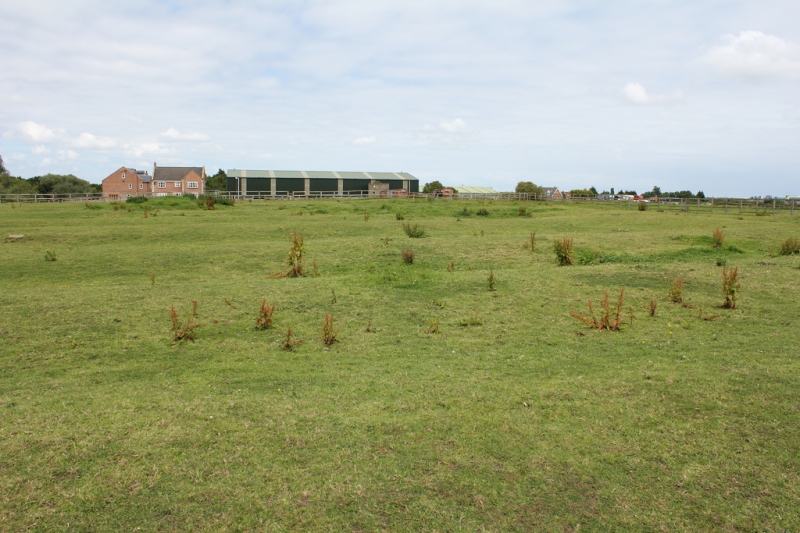 The monument includes the deserted remains of the medieval village of Stainsby
and part of its surviving open field system, situated on the east bank of the
Stainsby Beck. The earliest known reference to a settlement in the area is
contained in the Doomsday Book of 1086 when it is recorded as `three carucates
at Steinesbi'. The manor was held at the end of the 13th century by Walter de
Stainsby and its descent over the following 700 years is well recorded in
documents. In 1302 nine inhabitants of `Staynesby' are recorded as being
eligible to pay taxes. By 1757 all but one of the farms in the village had
been dispersed to other parts of the estate; only Stainsby Grange Farm
remained in the village.
The village survives as a series of earthworks and buried remains in the
fields south and east of Stainsby Grange Farm. The western side of the village
is visible as a line of three rectangular enclosures or tofts, oriented north
to south, bounded by low earthen banks standing to an average height of 0.5m.
The remains of a fourth toft lie at the north end of this row. A World War II
Type 22 pillbox also included in the scheduling is situated on the edge of one
of these tofts; this was one of several perimeter defence works placed on the
monument associated with Thornaby Airfield. The rectangular enclosures measure
up to 35m wide and 50m long and are separated from each other by shallow
ditches 0.3m to 0.5m deep. Abutting this row of tofts at the east is a second
line of rectangular enclosures of a similar size to the first; this row is
well defined at its southern end where two enclosures are clearly visible; the
remainder of this row has been partly obscured by a post medieval boundary
bank. At the eastern end of some of the tofts, traces of slight rectangular
platforms indicate the foundations of rectangular long houses. The western
limit of the tofts is marked by a linear, hollow feature interpreted as a back
lane with a prominent headland to its rear.
At the south end of the monument, east of the two rows of rectangular tofts,
there are the slight earthwork remains of further rectangular enclosures,
oriented north west to south east, and a hollow way. These features were first
revealed on aerial photographs as earthworks in 1946 and as soil marks during
an episode of ploughing in 1978. There is a line of at least three small
enclosures measuring 27m by 22m, and one large rectangular enclosure at its
southern end measuring 45 by 30m fronting onto a broad hollow way to the east.
These tofts are enclosed on the east by a linear ditch interpreted as a former
back lane. This is thought to represent the eastern side of the village but
the two sides are not parallel with each other and are thought to represent
different phases in the development of the village. To the north of these
features there are the remains of prominent earthworks including the
continuation of the hollow way northwards and the remains of at least one
further toft, visible as an oval platform at its northern end. A large
circular depression at the northern end of the hollow way is interpreted as a
pond and several linear channels between it and the stream are interpreted as
drainage channels. A linear platform adjacent to the stream is thought to
represent the site of a mill or a fishery referred to in a document at the end
of the 13th century.
To the west and east of the village, beyond the two back lanes which mark the
rear of the tofts on both sides, there are the well preserved remains of part
of the open field system which once surrounded the village on all sides. The
surviving remains are visible as parts of three large medieval furlongs, or
fields, with intact headlands. Each furlong contains rig and furrow
cultivation which survives well and stands to a maximum height of 0.5m.
All fences and gate posts which cross the monument, all features associated
with the equestrian centre including flood lights, horse troughs and wooden
horse boxes, as well as the surfaces of all roads and drives are excluded from
the scheduling, although the ground beneath all of these features is included.

Medieval rural settlements in England were marked by great regional diversity
in form, size and type, and the protection of their archaeological remains
needs to take these differences into account. To do this, England has been
divided into three broad Provinces on the basis of each area's distinctive
mixture of nucleated and dispersed settlements. These can be further divided
into sub-Provinces and local regions, possessing characteristics which have
gradually evolved during the past 1500 years or more.
The Tees Valley local region is a rich agricultural lowland, with varied soils
on glacial and alluvial deposits once supporting dense concentrations of
market towns and villages. Depopulation has thinned the numbers of villages,
while enclosure in the 17th and 18th centuries has brought scatters of
isolated farmsteads to landscapes once dominated by great expanses of open,
communally organised townfields.

Medieval villages were organised agricutural communities, sited at the centre
of a parish or township, that shared resources such as arable land, meadow and
woodland. Village plans varied enormously, but when they survive as earthworks
their most distinguishing features include roads and minor tracks, platforms
on which stood houses and other buildings such as barns, enclosed crofts and
small paddocks. They frequently included the parish church within their
boundaries, and as part of the manorial system most villages included one or
more manorial centres which may also survive as visible remains as well as
below ground deposits. In the central province of England, villages were the
most distinctive aspect of medieval life, and their archaeological remains are
one of the most important sources of understanding about rural life in the
five or more centuries following the Norman conquest.
Most nucleated villages were surrounded by a series of unenclosed fields known
as an open field system. Open fields originated before AD 1000 and continued
in use throughout the middle ages. However, recent work has shown that some
open field systems preserve the fossilized remains of earlier Roman and
prehistoric systems within their basic framework. From the late 16th century,
the open fields began to be enclosed by banks and hedges into the more
familiar fields of the present landscape. Formerly more extensive, open fields
generally survive as fragments in association with medieval settlements. They
were the product of a communal system of farming in which each tenant held a
share of the manor's arable and meadow land. The holdings of each tenant were
scattered across the open fields, the basic unit of tenancy being the lande.
Landes were parcelled together into larger groups called furlongs, whose
length and the number of landes they contained varied greatly. Furlongs were
grouped together into fields and an open field system usually included several
such fields. Systems of crop rotation were employed, and these might be based
on either the field or the furlong. The sides of the furlongs were marked by
baulks of unploughed land which often survive as low banks and are known as
furlong boundaries. The ends of the furlongs were marked by headlands which
survive as prominent earthen banks. Ploughmen used the headlands as spaces on
which to turn the teams of oxen or horses which pulled the plough. Headlands
were usually ploughed after work on the rest of the furlong had been
completed, though sometimes they were left unploughed, and, along with the
baulks between furlongs, provided access between furlongs. Such unploughed
areas were grazed by livestock. The most characteristic feature of open field
systems is ridge and furrow, a form of medieval cultivation produced by the
action of a heavy plough with a fixed mouldboard.
The deserted medieval village at Stainsby is well preserved and retains
significant archaeological deposits. The village shows evidence of more than
one phase of development and, taken together with the remains of its open
field system, it will add greatly to our knowledge and understanding of the
development of medieval settlement in the region.