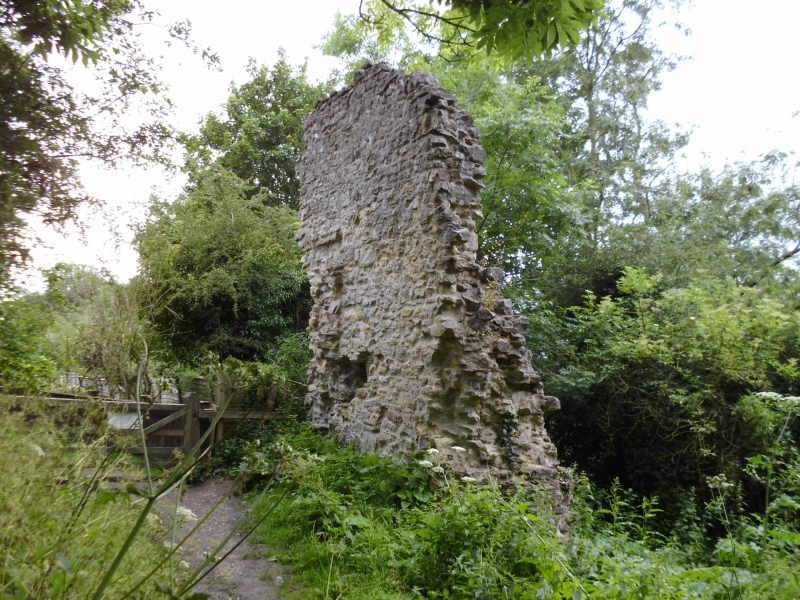 The monument includes the buried and standing remains of a late medieval
hunting lodge known as Neville Castle, located on the north side of
Kirkbymoorside.
Neville Castle is believed to have replaced the moated manor house on Vivier's
Hill, 500m to the south east, as the main seat of the manor of Kirkbymoorside
which was held by the Neville family from the beginning of the 15th century
until 1569, when it was forfeited to the Crown following the rebellion of
Charles Neville, Earl of Westmoreland. The Nevilles were an important and
influential family throughout this period. Their numbers included Richard
Neville, Earl of Warwick, known as the Kingmaker for his role in the Wars of
the Roses, and Charles Neville, who rebelled in support of Mary, Queen of
Scots. In 1570 Neville Castle was described as a 16th century hunting
lodge set in a park with a boundary circuit 2.5 miles (3.75 km) in length. Two
small areas of the monument were excavated in advance of building work over
several seasons in the early 1960s and in 1974. These excavations uncovered a
complex sequence of buildings and modifications to buildings on the site,
starting with a timber cruck framed hall which was occupied until about the
end of the 15th century, when it was replaced by a larger, more grandiose set
of stone buildings arranged around a courtyard.
Most of the remains of Neville Castle survive as buried deposits, but there
are at least four sections of exposed masonry. The largest is the wall
fragment standing to the west of the path that leads from the end of
Castlegate lane along the side of Manor Vale. This is of rough rubble
stonework standing some 6m high, 1m thick and 4m long. It retains part of a
buttress at the north end of its west face along with a number of putlog holes
(sockets for timber scaffolding). Approximately 25m south of this wall
fragment there is the chamfered base of a finely dressed stone wall forming
the south west corner of a tower or building. Another corner of walling,
interpreted as the corresponding north west corner, was mapped in 1974. This
lay 15m south of the 6m high wall fragment, but now lies buried. The
excavation in 1974 uncovered the floor levels of a kitchen within the west end
of the garden of the property known as Squirrels Lea and the southern wall of
a hall running along its northern boundary. This section of wall, which stands
up to about 0.5m high and includes the base of a south facing oriel window
with a fireplace to its west and a doorway to the east, survives as a feature
within the garden. About 30m to the south, within the garden of Castle Walls,
there are the bottom three to four courses of a circular kiln or oven
approximately 1.5m in diameter, which was uncovered during the construction of
a sunken garden. Within the field to the south there is a series of low
earthworks of buried wall footings for an east-west range of buildings, whilst
within the field to the north of Squirrels Lea cropmarks of further features
have been photographed. The excavations in 1974 and the early 1960s showed
that the medieval buildings originally extended into the northern field.
A number of features are excluded from the scheduling; these are all the
modern houses and outbuildings; all modern garden walls, fences, and gate
posts, path, road and patio surfaces, and all telegraph poles and street
signs; although the ground beneath all these features is included.

The standing and buried remains of Neville Castle adds to the understanding of
one of the major late medieval noble families of northern England. Excavation
in the early 1960s and 1970s demonstrated the archaeological potential of the
monument and further significant remains will survive below the present ground
surface.