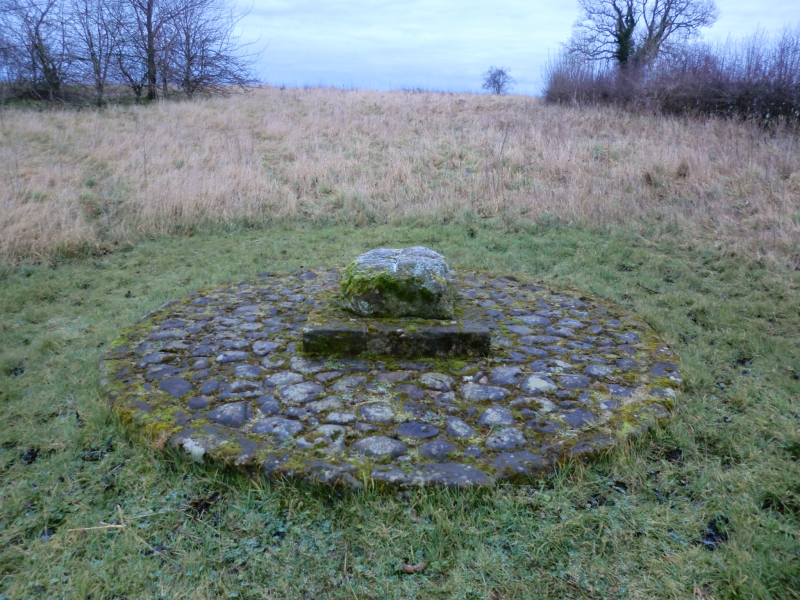 The monument includes a cross-inscribed stone called Stony Cross set up beside
the A170 from Helmsley to Pickering where the road from Wombleton joins it.
The Thurkilsti, one of the four most important medieval roads from south to
north across the North York Moors, crosses the A170 at this point or close to
it as it goes from Sunley Hill towards the Skiplam Road.

The cross consists of a shaped sandstone block set on a modern plinth resting
on a platform of cobbles. The stone is 0.57m square with the top edges rounded
off and a deeply incised cross cut across the top. It seems to be a cushion
capital from a building reused as a waymarker. The modern plinth is 0.94m
square made of pieces of sandstone and the whole is built into a circular
cobbled platform 3m in diameter.

The cross is in its original position and the modern plinth and stone cross
are included in this scheduling together with the ground beneath. The modern
cobbled platform is not included in the scheduling.

The Stony Cross wayside cross survives as a single cushion capital of fine
sandstone with a cross incised on it. It marks the line of the Thurkilsti
medieval road which appears in a Rievaulx charter of AD 1145 granting land
from Walter L'Espec. It gives us insight into the organisation of the medieval
landscape and the implied piety of the medieval Christian traveller.