The Old Hall, 50m north west of All Saints Church 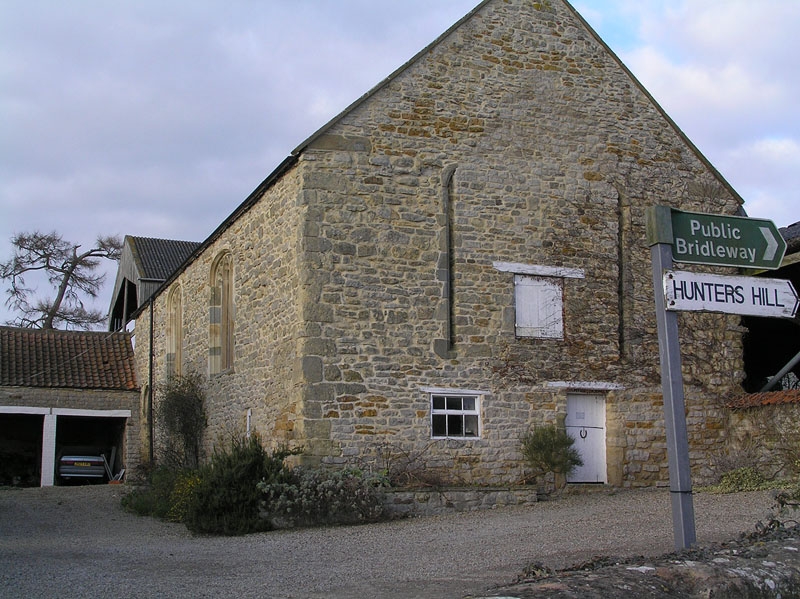 The monument is the standing and still roofed remains of a listed 12th
century great hall located 40m NNW of All Saints Church, Sinnington, just to
the east of the later and still occupied Sinnington Hall.
The hall, which is Listed Grade I, is believed to have been built by
Guisborough Priory in the later 12th century for the grange that was acquired
from Ralph de Clere after 1168. At the same time, de Clere had given the
church at Sinnington to the Benedictine nunnery at Yeddingham. In 1239
Yeddingham Priory agreed to support the chapel of St Martin and the other
buildings at Sinnington owned by Guisborough Priory. In 1431-32 Matilda of
York paid for a series of modifications to the chapel at Sinnington, which has
been identified as being the great hall, including the installation of
partitions and flooring, and the filling of holes and old windows. After the
Dissolution of the Monasteries in the 1530s the hall is thought to have
reverted to domestic occupation, becoming the rectory of William Thwaytes, but
in the following centuries the building was re-roofed and converted into a
barn and stables.
The hall is orientated roughly north-south and is approximately 21m by 11m
externally, stone built with a pitched slate roof. The west wall retains two
partially blocked three light 15th century windows and, at the north end, a
pair of two centre arched doorways. The east wall has an original 12th century
door and window together with an additional larger three light 15th century
window, all of which are now blocked. There is part of a large blocked 15th
century window in the south wall together with two doors and a small
rectangular window related to the change of use of the hall into a barn. Two
later doorways, both relatively modern, have been inserted into the north wall
and the northern end of the east wall respectively. Internally the hall has
four bays, with the two end bays divided from the central pair by 2.5m high
stone partition walls. These partition walls are later than the main shell of
the building and form two separate rooms with a floor above open to the main
body of the building. The southern partition wall partly blocks one of the
15th century windows and is considered to have been a post-Dissolution
modification. The northern room, which has been used as a stables, is accessed
by one of the two arched doorways and is believed to be earlier. The central
pair of bays were originally divided by a 15th century oak screen which
survived into the early 20th century. The carved oak cross beam for this
partition believed to have been paid for by Matilda of York is still in place.
Buildings lying immediately adjacent to the Old Hall on the north, east and
western sites, including modern barns and a garage are not included in the
scheduling.
All modern walls and posts, and all modern road, path and floor surfaces are
excluded from the scheduling, although the ground beneath these features is
included.

Medieval great houses were the residences of high-status non-Royal households.
They had domestic rather than military functions and show little or no sign of
fortification, even of a purely cosmetic nature. Great houses share several of
the characteristics of royal palaces, and in particular shared similar
characteristics of size, sophistication, and decoration of the architecture.
Great houses usually consist of a group of buildings, including a great hall,
service rooms, one or more kitchens, several suites of chambers for the
owners, the household and its guests, and a gatehouse. Other ancillary
buildings are known to have been present but very rarely survive. Earlier
examples typically comprised a collection of separate buildings, but through
the 14th and 15th century there was increasing integration of the buildings
into a few larger buildings. By the later medieval period, such complexes were
commonly laid out around one or more formal courtyards; in the 16th century
this would occasionally be contrived so that the elevations were symmetrical.
Many great houses are still notable for the high quality of their architecture
and for the opulence of their furnishings. Several examples contain
substantially intact buildings, others consist of ruins or complexes of
earthworks.
Great houses are found throughout England, although there is a concentration
in the south and Midlands. Further north, great houses were more heavily
fortified, reflecting more unsettled political and social conditions, but
their domestic purpose and status were still predominant. Fewer than 250
examples of great houses have been identified. As a rare monument class which
provide an important insight into the lives of medieval aristocratic or gentry
households, all examples will be nationally important.

The Old Hall at Sinnington is a good example of a medieval great hall
retaining substantial amounts of 15th century and earlier fabric. Its
importance is heightened by the series of modifications and changes in use
over its lifetime and the survival of documentary references adding to its
known history. The hall has an additional group value with the adjacent parish
church which shares some of its architectural features.